‘Hawks look to return to playoffs 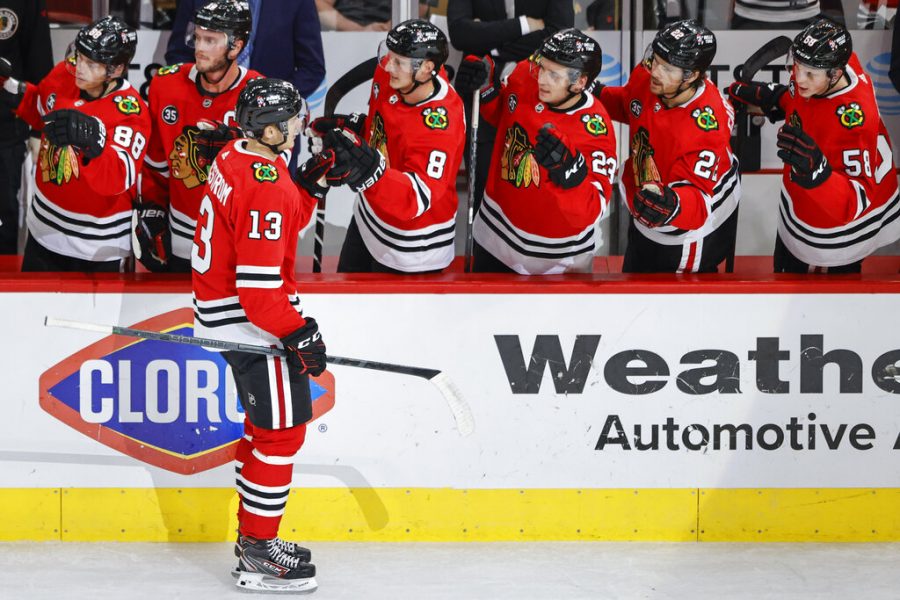 Chicago Blackhawks left wing Henrik Borgstrom (13) celebrates with teammates after scoring against the Minnesota Wild during the first period of an NHL preseason hockey game, Saturday, Oct. 9, 2021, in Chicago.

The Chicago Blackhawks are looking to bounce back after an underperforming season that saw them missing key players and failing to capitalize on late game opportunities.

With a new year comes new questions about the potential of head coach Jeremy Colliton’s young and hungry team.

Captain center Jonathan Toews will return to the Hawks after missing the entire 2020-2021 season with a chronic immune response syndrome he could only describe as leaving him “drained and lethargic.”

Joining him will be Kirby Dach, a young center with immense promise, who missed most of the 2020-2021 season after suffering a wrist injury during the 2021 World Junior Ice Hockey Championships.

Dach hopes to have a breakout season like he was having prior to his injury last season.

Right winger Patrick Kane, the leading scorer for the Hawks last season with 66 points, is looking as sharp as ever and should have high expectations for the organization.

Right winger Alex DeBrincat also looks to have a huge season after finishing last year with 32 goals. As a 23-year old, DeBrincat has a very high ceiling for the organization.

The Hawks’ defense lost a centerpiece when they traded defenseman Duncan Keith to the Edmonton Oilers, but they gained an important piece in return.

Defensemen Caleb Jones joins the team along with his older brother, defenseman Seth Jones. The Hawks acquired Caleb Jones in a blockbuster deal that saw them send defenseman Adam Boqvist, two first-round picks and a second-round pick. Chicago is trying to prove that they are no longer in rebuild mode.

The Hawks also made a big change in net when they acquired future first-ballot hall-of-famer and three-time Stanley Cup Champion goalie Marc-Andre Fleury.

The former Vegas Golden Knight came to Chicago in exchange for an AHL prospect and cash considerations, which was a steal for the Hawks.

Second-year goaltender Kevin Lankinen, who had an astounding season last year, will serve as the backup goalie but should see a fair number of starts.

These two netminders could be huge for the Blackhawks as they look to make the postseason for the first time since the 2020 COVID-19 shortened playoffs.

The fans will be back in the United Center. After a long 2020-2021 season with no fans in the stands and no singing along to Chelsea Dagger, the crowd will be even more electric than it has been in a long time.

Beer will be chugged, the boards will be banged on and the Chicago Blackhawks will waste no time trying to rile up the Madhouse on Madison.