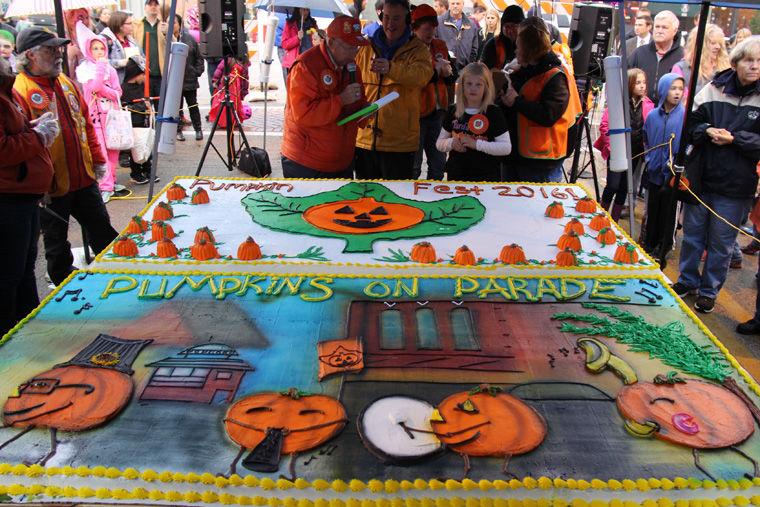 The 55th annual Pumpkin Fest is kicked off by Jarry Malmassar, president of the Pumpkin fest Committee. Malmassar thanks Hy-Vee for the 8 feet cake that will provide up to 1400 to 1600 pieces of free cake for the festival-goers.

The festival will include many activities to choose from, including an opening ceremony, various food vendors, a parade, a carnival, face painting, a pie eating contest, a 10,000-meter road run, fireworks and more.

The annual cake cutting ceremony marks the beginning of the festival and will take place at 5 p.m. on Oct. 27, according to the Sycamore Pumpkin Festival committee’s website.

The theme for this year is “Old Fashioned Pumpkin Festival.” The festival is family friendly, open to the public and free to attend.

There will be a pumpkin contest hosted by the Sycamore Lions Club where pumpkins will be on display on the DeKalb County Courthouse lawn. There are many different categories for the pumpkins that are submitted. The contest will have a president’s pick, pick of the patch, and then first, second and third places within each category, said Jennifer Diehl, the 2021 Sycamore Pumpkin Festival president and chair of the theme contest.

Michael DeVito is the vendor chair for the Sycamore Pumpkin Festival committee and has been on the committee since 2017. DeVito said he wanted to join the committee because it was a family tradition, part of his childhood and that the festival is a great way to connect with other members of the community.

“I think my favorite part of the festival is the parade; I absolutely love the parade,” Diehl said. “It’s one of the largest in the state of Illinois, and it’s just so fun.”

“My father was one of the originators of the Pumpkin Festival,” Diehl said. “It’s something that my family has attended since I was a child, and now my children have attended so just a lot of family traditions and a lot of history.”

“People should attend this event because it is the Sycamore staple,” said DeVito. “It’s been around for years and years and if you really want to just immerse yourself in the Sycamore culture, coming to the Sycamore Pumpkin Festival will do just that.”