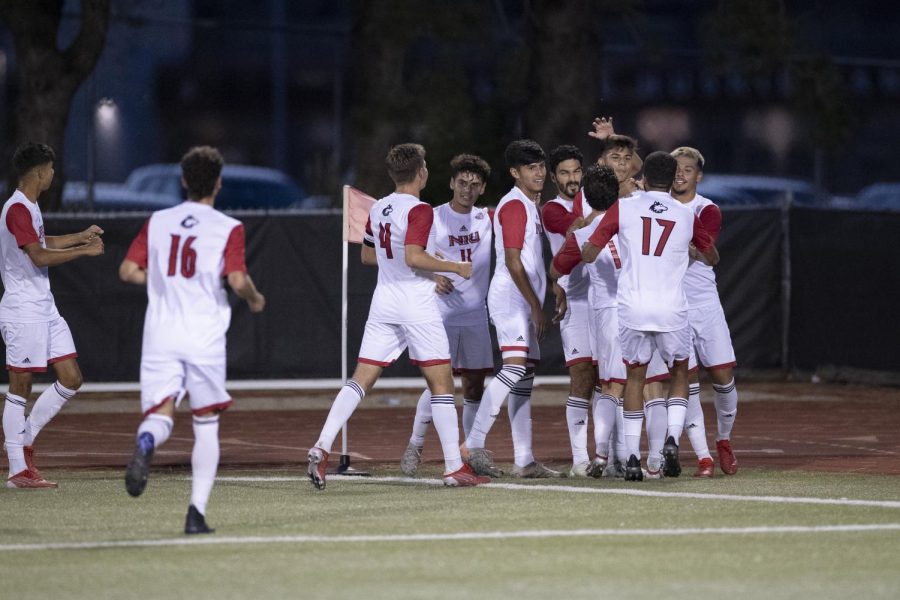 The NIU men's soccer team celebrates a goal in the first half of their 3-0 victory against the Marquette University Golden Eagles on Sept. 10 in DeKalb.

DeKALB—The NIU men’s soccer team entered the United Soccer Coaches Poll as the  22nd-ranked team in the country this week for the first time since September of 2011.

The 10-1 Huskies new ranking comes off a 2-0 win against the then fourth-ranked West Virginia University Mountaineers.

Men’s head coach Ryan Swan knows that while there’s still work to be done, cracking the top-25 is a great recognition of the team’s body of work thus far.

“We always talk about the fact that the rankings don’t really matter until the end of the year, but it is nice to get some recognition for what we have done so far,” Swan said. “It is something we are aware of from week-to-week, where we stand in the regional, or in this case national rankings. It is pleasing, but the big thing for us is not to get caught up in it. It doesn’t change who we are as a team, and we have to make sure our goals stay the same and we remain focused on the next game at hand.”

The Huskies will have another tough test ahead of them at 7 p.m. Saturday as they host the No. 17 Bowling Green State University Falcons. Both teams sit atop the conference at 2-0.