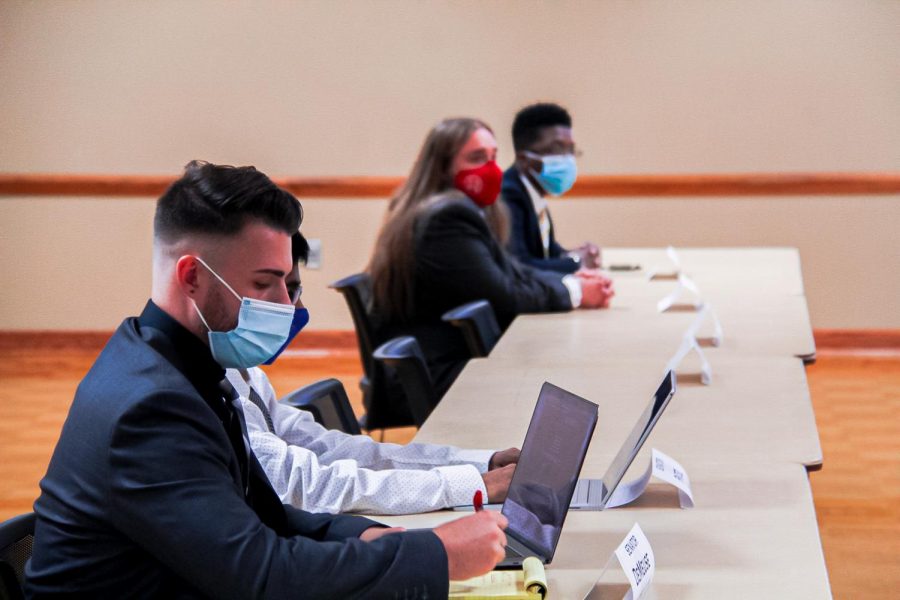 Senator Ethan DeMeuse (left) takes notes during the Aug. 29 Senate meeting. SGA Senate meets at 5 p.m. every Sunday in the Capitol Room of the HSC.

DeKALB — The Student Government Association swore in Sohum Khaladkar as a new senator at its Senate meeting on Sunday.

Sohum Khaladkar, a sophomore marketing student, spoke in front of the Senate and outlined the goals he wanted to meet as a senator.

“I know that increasing security can be a little controversial, especially with armed guards,” Khaladkar said, suggesting use of security cameras to increase campus safety instead of increased police presence.

There was also a motion to pass an Enrolled Senate Bill, which outlined changes in expectations and roles for the SGA.

The Senate first voted on a motion to remove the striking of the Director of Advertising position from the bill. This motion was denied in a vote of nine to five, leaving the clause of the bill that eliminated the position intact.

The Senate then voted on a motion to remove the striking of the Director of Athletics and Recreation position from the bill. This motion passed unanimously, retaining the position.

Due to the changes that would have to be made to the bill following the removal of the clause to strike the Director of Athletics and recreation, the senate then voted unanimously to table the bill for their Oct. 17 meeting pending revision to the bill.