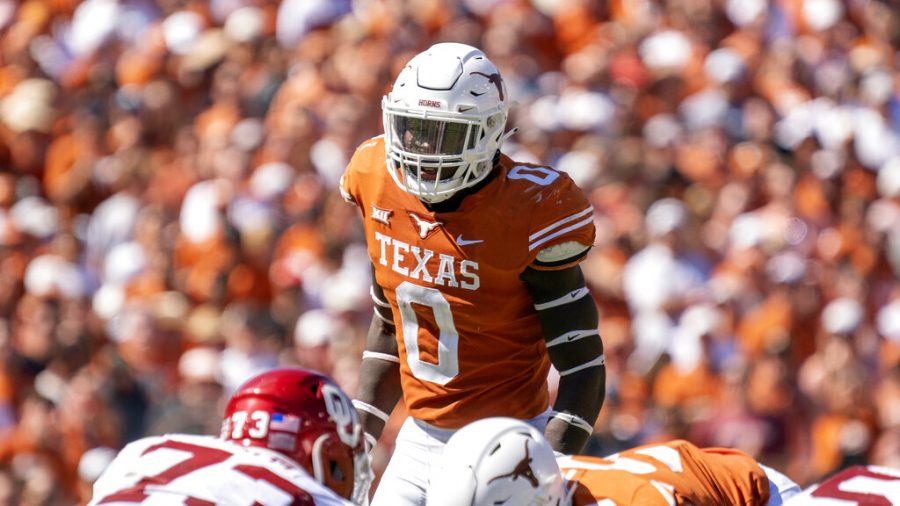 Texas linebacker DeMarvion Overshown (0) waits for the snap during the first half of an NCAA college football game against Oklahoma at the Cotton Bowl, Saturday, Oct. 9, 2021, in Dallas. Oklahoma won 55-48.

The 5th ranked University of Alabama Crimson Tide enter week seven coming off a loss against unranked Texas A&M University. Alabama’s defense was eaten alive by the Aggies, while the offense was unable to move the ball down the field in the first half. The Mississippi St. Bulldogs come off a bye week after defeating Texas A&M a week earlier. Alabama will look to regain championship form against the Bulldogs. This game should not be close.

The University of Texas Longhorns blew a huge lead against the University of Oklahoma Sooners last week in the Red River Showdown losing 55-48. Now, the Longhorns will have another tough test ahead of them against the Oklahoma St. University Cowboys, fresh off a bye week. Texas’ defense has been the third worst in the Big-12 allowing 29.2 points per game and nearly 200 rushing yards per game. OSU on the other hand has been porous on offense ranking near the bottom of the Big-12 with 25.4 points per game. Expect a messy game.

The University of Cincinnati is rolling into week seven as the third best team in the country after  a 52-3 thrashing of Temple University last week and a 24-13 win over then ninth-ranked University of Notre Dame. Many still are skeptical about the group of five teams standing, citing they have very few statement wins to place them so high. Cincinnati will go up against the University of Central Florida Knights this week who defeated the Eastern Carolina University Pirates last week after losing two games to The United States Naval Academy and The University of Louisville. This should be a drubbing.

The University of Georgia Bulldogs claimed the top spot in the AP top 25 rankings this week after an easy 34-10 win over the eighteenth ranked Auburn University Tigers. Georgia’s defense has been lights out, allowing only 5.5 points per game and two total touchdowns in six games. They will face-off against the surprising University of Kentucky Wildcats whose defense is the third best in the SEC allowing only 17.5 points per game and 305 total yards per game. Georgia’s defense should lead them to a win.

The Biggest story out of Norman Oklahoma is who will be the quarterback for the University of Oklahoma Sooners. Quarterback Spencer Rattler was pulled during the first half of last week’s game for backup true freshman quarterback Caleb Williams. The Sooners under Rattler have seemed anaemic at times, as the former Heisman front runner has been unable to extend plays and find open receivers. Williams showed his strong arm and ability to escape in Oklahoma’s premier game against the Longhorns. They take on Texas Christian University who are coming off a big win against Texas Tech University last week, while keeping the game close in a 32-27 loss to Texas. If Rattler plays, expect the game to be close. If Williams is in, it should be easy for the Sooners.