What White Sox need to do in offseason

After an ALDS exit at hands of Houston, White Sox ponder their winter moves 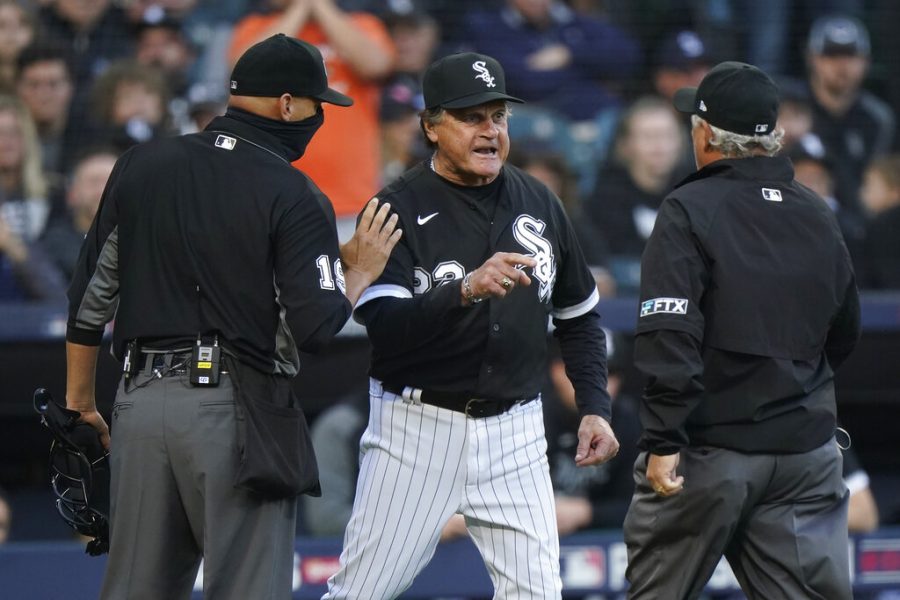 Chicago White Sox manager Tony La Russa argues with umpire Tom Hallion as home plate umpire Vic Carapazza tries to hold him back after Jose Abreu was hit by a pitch against the Houston Astros in the eighth inning during Game 4 of a baseball American League Division Series Tuesday, Oct. 12, 2021, in Chicago.

The Chicago White Sox failed to advance past the first round of  playoffs for the second straight season, losing to the Houston Astros in the American League Divisional Series 3-1.

After years of tanking and trading away star players for future assets, the White Sox have finally put together a solid core on the verge of contending.

They have the reigning AL MVP in first baseman José Abreu and All-Star shortstop Tim Anderson to hold down the infield. The White Sox roster is full of talent at nearly every position. Young prospects like outfielders Luis Robert and Eloy Jiménez, who both won AL Silver Slugger Awards last season, will only make the team better with experience.

Even with so much talent scattered across the field, the Sox have not reached the expectations that were set for the South Siders coming into this year’s postseason.

“We accomplished the first goal but were disappointed we only got one win and not two more,” manager Tony La Russa said postgame following the White Sox game four loss. “It’s bittersweet.”

One of the main reasons  the White Sox struggled was because of their pitching, which was a surprise considering their pitching is what helped them surge through the regular season. The White Sox pitchers only gave up 3.73 runs per game, fifth-best in the MLB.

Throughout the ALDS, the Sox pitching was not up to standard, giving up 7.94 runs per game to the Astros. White Sox Cy Young award hopeful pitcher Lance Lynn posted a 2.69 earned run average for the Sox this season. In Lynn’s only appearance in game one, Lynn finished with a lowly 12.27 ERA, his lowest since 2013.

Carlos Rodón, who made his first career All-Star game this year, failed to make it out of the third inning in his game four start, giving up four earned runs before getting hooked.

Unfortunately for the White Sox, the bullpen couldn’t pick up the slack for the starters.

Reliever Michael Koepech had an ERA of 18.00 over a two-game stretch, and All-Star Liam Hendricks had a 9.00 ERA. Newly acquired Craig Kimbrel blew his first opportunity in game two, coming in relief for the White Sox down 5-4 in the seventh inning. Kimbrel gave up a two out double with the bases loaded to Astros’ outfielder Carlos Correa, scoring all three runs.

The Astros’ two-out hitting was dominant all series long. Of the 31 runs the Astros scored in the series, 18 of them came with two outs.

“More than anything else was two-out hits,” La Russa said when asked about the game four loss. “Count the number of RBIs we gave up with two outs. We couldn’t get that last out. You count them today, and that’s a big difference maker.”

The White Sox will now look to the offseason to improve on some of their issues. If the White Sox keep Tony La Russa for next season, he needs to work on glaring holes in the team’s defense, which ranked 28th in defensive runs saved. Catcher Yasmani Grandal struggled throwing out Astros’ base stealers all series.

The team also has to look into tuning up the rotation. Lynn and Giolito are under contract for next season, with Rodón likely to leave via free agency unless the White Sox are willing to spend on him.

The White Sox still have former Cy Young winner Dallas Keuchel, who was left off the ALDS roster after struggling in his second season with the club. The White Sox have a good base for starting this off-season, but they need to think big when looking into free agency.

The biggest name on the pitching market is three-time Cy Young winner and future Hall-of-Famer Max Scherzer. The current Los Angeles Dodgers pitcher is still firing missiles and is on his way to winning his fourth Cy Young.

All off-season moves and decisions will be pending on what happens with the owners and players Collective Bargaining Agreement, which is set to expire Dec. 1. If either side decides on a work freeze, then no transactions can be made. If no conflicts arise before the Dec. 1 date, the White Sox will have access to sign any player five days after the World Series ends.