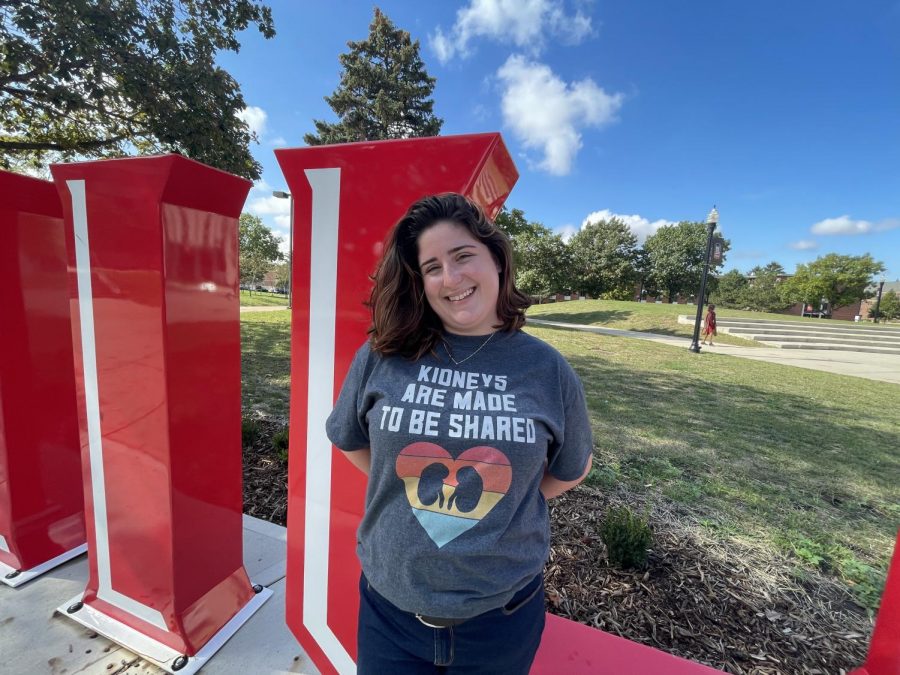 Amanda McGovern, a junior communicative disorders major stands in front of an NIU sign wearing a shirt that says "kidneys are meant to be shared."

DeKALB — After years of struggling with kidney failure, Nicole Mayweather of Aurora posted to Facebook in September 2020 in hopes of finding a kidney donor that could save her life.

Eight months later, Mayweather received a message in May from a former coworker, Amanda McGovern, a junior communicative disorders major. McGovern met Mayweather seven years ago when they both worked at a Chase Bank, 2500 Westfield Drive in Elgin. McGovern left the bank after a year of working but remained friends with Mayweather on Facebook.

Mayweather said that she started having kidney problems when she was pregnant with her son, who is now seven years old.

“When I had my son Kai when I was pregnant with him, my kidneys stopped working,” Mayweather said. “I went to a nephrologist, and he told me that my kidneys were in stage four kidney failure.”

Mayweather said that she was eligible for a kidney transplant evaluation after her diagnosis in 2014. At Northwestern Memorial Hospital in Chicago, she was evaluated with a CT scan, an echocardiogram and a stress test. Mayweather was later placed on the United Network for Organ Sharing list for deceased kidneys.

“They put you on the UNOS list, and you typically wait on that list for a deceased kidney from between five to six years in the State of Illinois,” Mayweather said.

In September 2020, Mayweather posted on Facebook that she was in need of a kidney, where she tried to appeal to her friends and family to obtain a donor. Mayweather’s Facebook post allowed for anyone to take a living donor evaluation screening test.

“I knew she had kidney problems, but this was the first time she had posted about it on Facebook,” McGovern said. “She was going to be going on a list for donors and said that a live donor is always the best.”

Mayweather said it’s best to have a living donor because you can do the transplant on your own time, and the donated kidney is more likely to function properly.

“Amanda said that she did it,” Mayweather said. “I didn’t try to get my hopes up because I thought like ‘this can’t really be true.’”

Mayweather was shocked when the hospital called McGovern for further evaluation, but she said she still tried to remain neutral and indifferent.

McGovern said that the process didn’t feel real for her as about 90% of prospective donors are denied since donor compatibility is difficult to match. McGovern went through a series of tests in January, and she chose to schedule the surgery in May because of waiting periods in the hospital and so it wouldn’t interfere with school. Once the surgery was scheduled, it was when it started to feel real.

McGovern is now fully recovered from the surgery. The only restriction she has is that she cannot take a lot of non-steroidal anti-inflammatory drugs like Ibuprofen and Aleve.

Mayweather is also fully recovered, and she has to take anti-rejection medicine for the rest of her life. Mayweather said there are currently no signs of rejection and that her kidney is functioning very well.

Mayweather said her children were very excited for her to have the surgery, and she had additional support from her aunt and father.

“I think that it was such a very selfless thing for her to do,” McGovern’s aunt Louann Engler said.

Many people questioned McGovern for donating her kidney but, she said, “it’s not my place to be like ‘oh you’re, you’re worthy of it’ like ‘you’re that close to me,’ or like ‘you are a good enough person,’ to me it was like, well, she’s just, ‘she’s worth getting to live longer.’”

McGovern and Mayweather don’t see each other often, but they each bought a shirt that reads, “kidney buddies for life.”

“It was so amazing and so special, and I cannot thank her enough,” Mayweather said.