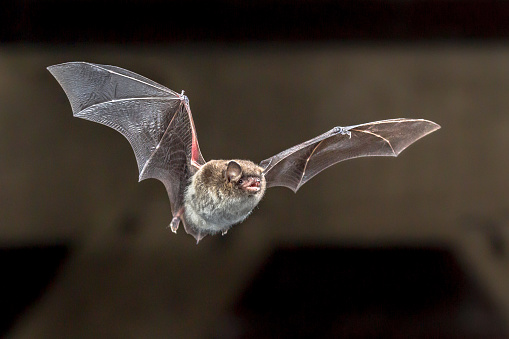 Daubentons bat (Myotis daubentonii) flies on the attic of a house.

DeKALB — The Dekalb County Health Department confirmed that a bat found on Oct. 9 tested positive for rabies. The bat was found near Sycamore Road by a vaccinated dog who had to receive a booster shot after coming in contact with it.

Bats are the number one primary carrier of rabies in Illinois. It’s important to take precaution for handling a rabies-infected bat.  A bat that’s active during the day and on the ground may have rabies.

Rabies isn’t going to be determined by any visual symptoms or aggression. If you ever come in contact with a bat, without putting yourself in harm’s way, cover it with a bucket or large can. Do not release the bat until after talking with public health officials.

Rabies can have serious effects on humans and other mammals’ nervous systems. Rabies can be transmitted through the bite of an infected animal. It can also be contracted through the saliva of a rabid animal that gets directly into the eyes, nose, mouth or an open wound. If you or a pet is bitten by a bat seek immediate medical attention. Without treatment, rabies can become fatal.