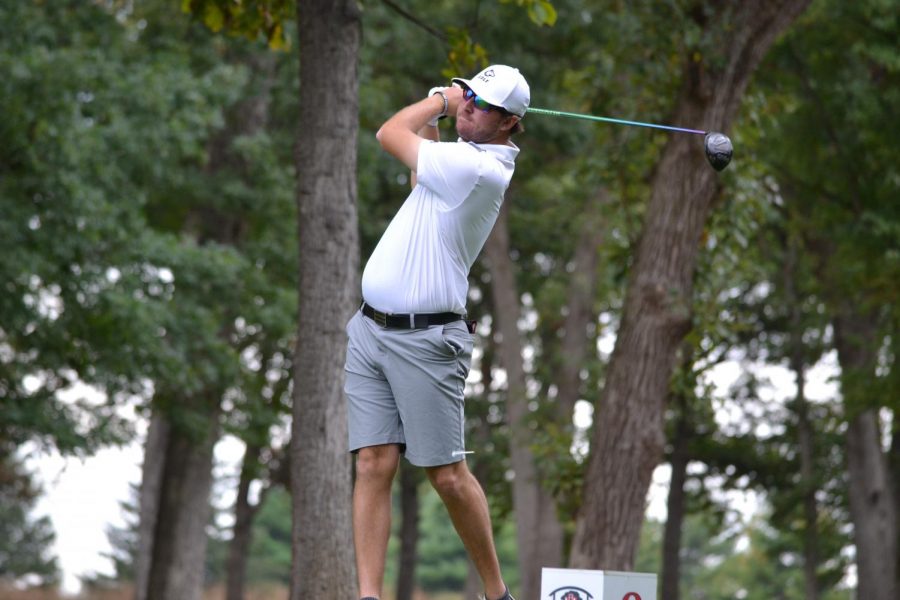 Senior Reece Nilsen practices at Rich Harvest Farms on Aug. 28. Nilsen gained his second top 10 finish of the year with a win at the Xavier Invitational.

DeKALB — The men’s golf team finished in a tie for first place with Morehead State University at the Xavier Invitational in Cincinnati, Ohio while senior Reece Nilsen was crowned as the tournament champion as an individual competitor.

Nilsen concluded Tuesday’s final round with a score of six-under par, seven strokes ahead of the runner-up, senior Adam Van Raden of Austin Peay State University. Nilsen’s first-place finish was his second top-five performance this season, finishing second at the Badger Invitational on Sep. 28.

“Regardless of where I play in the lineup, my expectations don’t really change,” Nilsen said. “Whether I’m playing one, five or as an individual, I still expect to go win in every tournament I play in. (After the first 14 holes), I just played really good golf and kept the ball in front of me and putted the ball well.”

NIU began the tournament with 15 bogeys and two double bogeys in the opening nine holes.  At the end of the first round on Monday, NIU was in third place behind Morehead State and DePaul University with a score of seven-over par.

NIU had jumped to second place on the team leaderboard by the end of play Monday, passing DePaul University with a stroke count of 13-over. Nilsen also rose to first place for individuals with a score of two-under par, having been tied for fifth at the end of the previous round.

On Tuesday, NIU briefly engaged in a duel for second place with Drake University before moving up to battle Morehead State for first place at 16-over par. During play at holes nine through 14, NIU was able to break the tie and take a two stroke lead.

The Huskies would hold on to first place up until the final holes, where a late push from Morehead State allowed them to tie with NIU at 12-over par to end the tournament.

Although Nilsen’s scores could not be counted towards the team’s score as an individual, NIU’s five golfers on the lineup had their best performance of the season as a unit.

Junior Luc Warnock was the highest ranked team competitor on the leaderboard for the Huskies. Warnock tied for sixth place with Xavier senior Imaad Qureshi at two-over par. Freshman Ben Sluzas was close behind in a three-way tie for eighth place with a par score of three-over.

Head coach John Carlson commended Warnock and graduate student Michael Cascino for their performance in the final nine holes of the third round that helped secure the tournament championship.

“(Warnok and Cascino) really carried us to the team championship,” Carlson said. “They put themselves in good positions off the tee, played from uphill and made putts when it counted.”

Following their successful performance at the Xavier Invitational, the Huskies will prepare to compete against tougher competition at the Poppy Hills Collegiate, their final tournament of the calendar year.

“We’re going to be jumping up our level of competition in the Poppy Hills,” Carlson said. “We’ll be ready for that test, not only on a great golf course against a great field, but in Monterey, California.”

The Poppy Hills Collegiate is scheduled to begin on Nov. 8. The three-day event will take place at the Poppy Hills Golf Course in Pebble Beach, California.