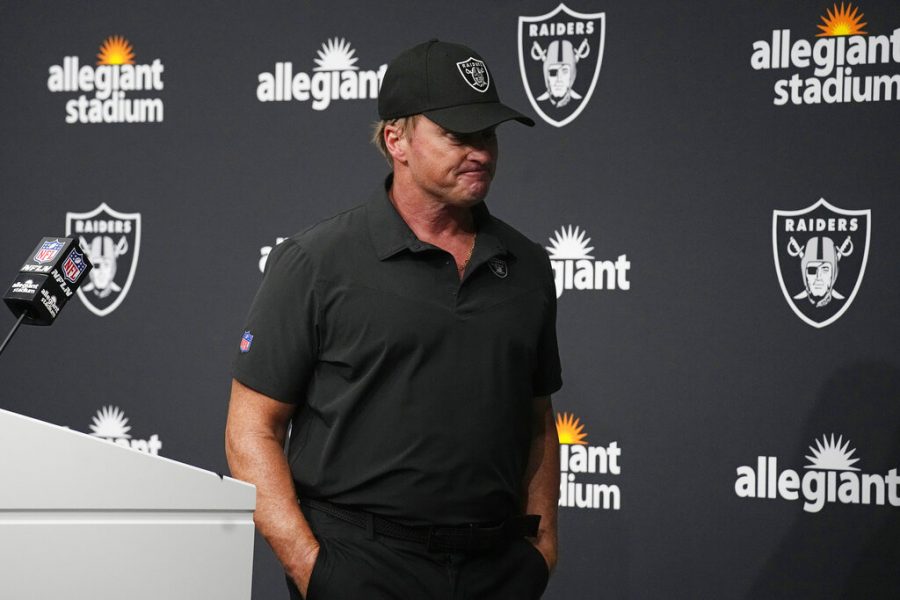 Las Vegas Raiders head coach Jon Gruden leaves after speaking during a news conference after an NFL football game against the Chicago Bears in Las Vegas, in this Sunday, Oct. 10, 2021, file photo. The Northern Star Editorial Board believes his former employer, ESPN, repeatedly failed to recognize the severity of his hate speech and were too quick to move on from discussing it.

The news broke right in the middle of Monday Night Football on Oct. 11. Jon Gruden had resigned as head coach of the Las Vegas Raiders after the New York Times released a report just hours prior detailing Gruden’s racist, sexist, homophobic and toxic emails between himself and football executives while Gruden was a commentator for ESPN.

The mood of the game between the Baltimore Ravens and Indianapolis Colts has already been altered, not just by the news but by the fact it was Gruden’s original employer who reported on it. ESPN announcer Louis Riddick took the wind out of any football fan who was hurt by Gruden’s comments.

“I feel sick to my stomach,” Riddick said after Gruden’s statement was read on the air. “I feel terrible for the players. Think about (Raiders quarterback) Derek Carr and all the blood, sweat and tears he put into this season, and it’s horrible. It feels terrible.”

It took less than 24 hours for ESPN to fall back on what they know, putting the thoughts of Black, gay and female fans on the backburner to focus on how the Raiders will maintain their sixth-seed in the AFC. On a day that should have been dedicated to having difficult discussions about the culture in the front offices of NFL teams, ESPN pivoted to Carr and any other topic they could to avoid touching the subject of what Gruden’s emails mean in a larger context.

The media failed to have an honest conversation about systemic racism, sexism and homophobia in football.

Among 650,000 emails, stemming originally from an investigation into sexual misconduct with the Washington Football Team, the Associated Press reported on Friday that no other teams or personnel were complacent in instances of xenophobic language on the level of what Gruden used. The AP report is based on an anonymous NFL source as the league has yet to release the emails publicly.

The NFL’s anonymous source may be correct that there’s nothing further to investigate. It may also be a cloak of disguise from the NFL being further pulled into the shame currently only occupied by Gruden. The Northern Star Editorial Board feels the role of the sports media for the coming days and weeks is to get the NFL to release those emails, investigate it themselves and report their findings.

In reality, Raiders defensive lineman Carl Nassib, who became the first openly gay active NFL player this summer, requested and was granted a day off Wednesday to process everything, according to reporting by the NFL Network on Oct. 13.

The media has failed football fans once. It can’t afford to do so again.