Colhoff driven by passion for soccer

In tough times for the women's soccer team, their head coach continues to be pushed by her passion for the game 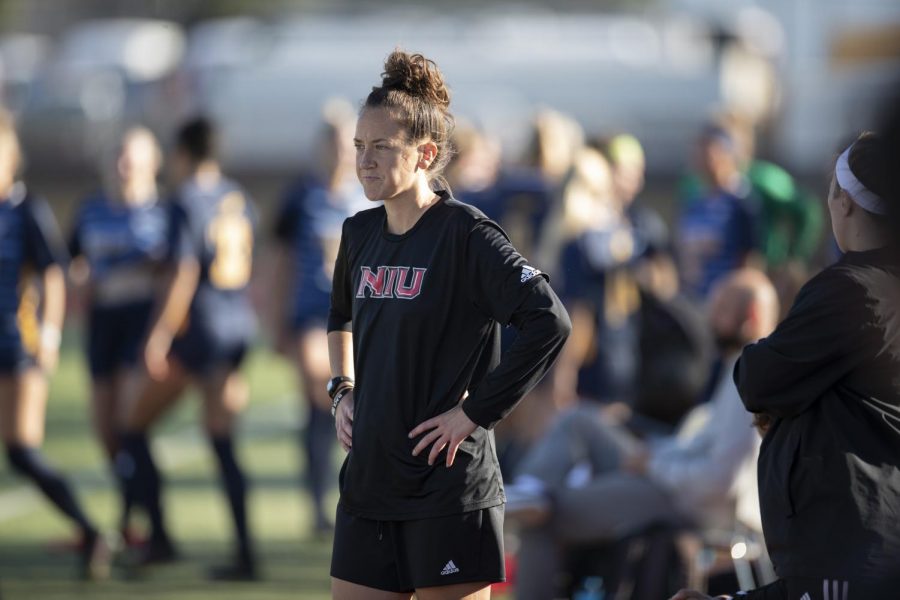 Passion is something that each of us have that lives within. For head women’s soccer coach Julie Colhoff, she is using her passion to inspire and help others.

From a young age, Colhoff has had a true love and passion for the game of soccer.

“Kindergarten or first grade is when I started playing,” Colhoff said. “I just love competing, the physicality of the game, and being on a team.”

Colhoff, a native of Buffalo, Illinois, played soccer all four years of college at Loyola University  Chicago as a center-back.

Colhoff and the Ramblers went on to win three conference championships, win the Horizon League title and advanced to the NCAA tournament in 2006 and 2007. The Ramblers obtained the league’s regular season championship in 2008.

Colhoff earned Horizon League honors in 2008 and 2009 and was a two-time all-conference selection along with the 2009 team captain. Colhoff finished her career third in all-time matches played at Loyola.

Colhoff earned her bachelor’s degree in human services from Loyola in 2010, ending her career as a four-time member of the Dean’s List and the Loyola All-Academic Team. She completed her master’s degree in organizational leadership and higher education from Lewis University in 2013.

Colhoff began her collegiate coaching career as an assistant coach at Lewis in 2011. Colhoff posted back-to-back winning seasons for the first time in 18 years in her tenure.

Colhoff coached the University of Illinois at Chicago Flames from 2014-2017, finishing 2017 with a winning record in the Horizon League for the first time in school history.  In her tenure, UIC players earned eight all-conference and six all-freshman team recognitions along with back-to-back goalkeeper honors.

Adding to her coaching resume, Colhoff spent time coaching internationally for a year as the international team leader for Soccer Without Borders in Solola, Guatemala. Colhoff also gained summer experience with the Hercules women’s professional soccer club in Alicante, Spain.

In 2018, Colhoff became the head coach of the Huskies and attempted to rebuild and lay the foundation for the team, introducing a more possession-based style of soccer.

In her first season, 11 Huskies earned Academic All-MAC honors, the second-highest total of any program in the conference. Colhoff was dedicated to making sure her players excelled on and off the field.

Colhoff continued to showcase steps in the right direction in 2019 with an overtime victory at Marquette, NIU’s first win over a Big East team in 14 years. Colhoff fielded a young lineup as 83% of Huskies’ goals were scored by freshmen and sophomores.

Colhoff has been able to change the overall culture since coming to NIU, and it has been visible to some of her players.

“She’s shared her passion for soccer and making the world and community around us a better place,” senior midfielder/defender Kylee Hermeyer said. “I think each year that is one of the first things that incoming freshmen notice.”

In the spring 2021 campaign, current sophomore forward Kierah Meier became the first Huskie named to the MAC All-Freshman Team since Colhoff arrived. The Huskies had another phenomenal off-field year with 13 Academic All-MAC honorees.

Colhoff has been able to leave an impact not only on her team, but for her staff as well.

“Julie is great at motivating the athletes,” Assistant Coach Eddie Garza said. “Seeing how she can impact the players individually, that’s probably the biggest thing I’ve taken away from her and how you impact them not only on the field but off the field.”

Colhoff’s tireless work and dedication to the game, shows in every one of her players and staff members.

“It’s hard to imagine my life without (soccer),” Colhoff said. “My career, it’s my passion, I love it, so to say where I would be is almost impossible.”