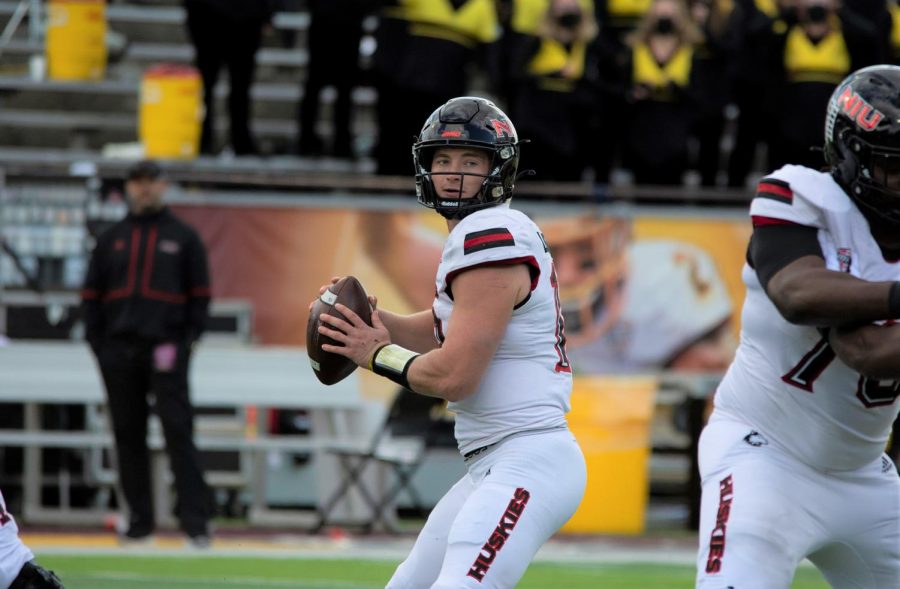 DeKALB — The Huskies sealed a comeback victory over the Central Michigan Chippewas 39-38 with a game-winning field goal by freshman kicker Kanon Woodill.

Woodill, who filled in for an absent redshirt sophomore kicker John Richardson, kicked a 26-yard field goal with 54 seconds left to give NIU the lead. A bad snap on the Chippewas field goal attempt was recovered by the Huskies to secure their fifth straight win.

Head coach Thomas Hammock said his pride continues to grow as the Huskies came back from a double-digit deficit.

“For us to be down 18 points near the half and find a way to score just one more point than them, that’s what we got done,” Hammock said. “Proud of our kids and our coaches. We’ve worked extremely hard to build this thing back up the right way. I couldn’t be more excited about the direction we’re heading.”

Down 28-10 in the second quarter, the Huskies rallied behind junior quarterback Rocky Lombardi’s best passing game for NIU. Lombardi threw for 320 yards and three touchdowns after NIU put an emphasis on a more balanced attack on offense.

“We knew we’d have to play a game like this at some point,” Hammock said. “We have tremendous confidence in our quarterback and our receivers, but we wanted to make it a premium.”

Lombardi made a habit of finding redshirt senior wide receiver Tyrice Richie and COVID-freshman wide receiver Trayvon Rudolph. Richie finished the game with eight catches and 147 yards. Rudolph had 160 yards and two touchdown catches, saying the attention the passing game got from coaches helped his confidence.

“I feel like (the passing game) was always there,” Rudolph said. “The confidence wasn’t there, and we got to work on the confidence more and build the chemistry more…This week helped us out confidence wise, showing we can catch, and we don’t have to be just a run-only offense.”

CMU redshirt freshman running back Lew Nichols III torched the Huskies’ defense early with a 66-yard touchdown run in the game’s opening minutes. The redshirt freshman had another rushing touchdown in the first quarter on a goal line dive and finished the game with 192 rushing yards.

The Huskies kept pace in the first with a 21-yard touchdown pass from Lombardi to redshirt senior wide receiver Tyrice Richie.

Rudolph had several highlight reel worthy plays in the first half, including a bobbling 46-yard reception to set up an NIU field goal by Woodill.

The Chippewas made another splash play for a touchdown in the second quarter. CMU redshirt freshman quarterback Daniel Richardson connected with junior wide receiver Kalil Pimpleton for a 72-yard passing score.

Richardson struck again later in the second quarter with a 22-yard pass to senior wide receiver JaCorey Sullivan to make it 28-10.

Rudolph gave the Huskies momentum into halftime with a 15-yard touchdown catch. On the ensuing two-point conversion, Rudolph caught the Chippewas off guard by throwing a pass to redshirt freshman tight end Tristan Tewes to make it 28-18 at the break.

The Chippewas struck first in the second half on a four-yard touchdown pass from Richardson to sophomore tight end Joel Wilson, but NIU only took one play to respond.

Lombardi put a long pass right in the hands of Rudolph before the receiver did the rest, scoring a 75-yard touchdown. The Huskies closed the third quarter with a field goal to make it 35-29, CMU advantage.

Lombardi made a big play with his arm again, connecting with Richie for 50 yards to put NIU at the goal line. Redshirt senior running back Clint Ratkovich punched the ball in to give NIU their first lead of the ball game.

CMU was able to retake the lead with 6:01 remaining off a field goal by freshman kicker Marshall Meeder. NIU went on a lengthy drive highlighted by a fourth down conversion and a 26-yard run by Ducker to set up the Woodill field goal.

The Chippewas got three quick completions to move the ball into NIU territory despite having no timeouts. CMU lined up for a 39-yard field goal attempt with 11 seconds left, but the snap rolled by the holder and was recovered by sophomore cornerback Jordan Gandy to seal the win.

NIU moves to 6-2 overall, and 4-0 in Mid-American Conference play. With six wins, the Huskies are bowl eligible for the first time since Hammock joined the program.

The Huskies will be off next week before starting midweek ‘MACtion’ on Nov. 3 against the Kent State University Golden Flashes in Kent, Ohio.