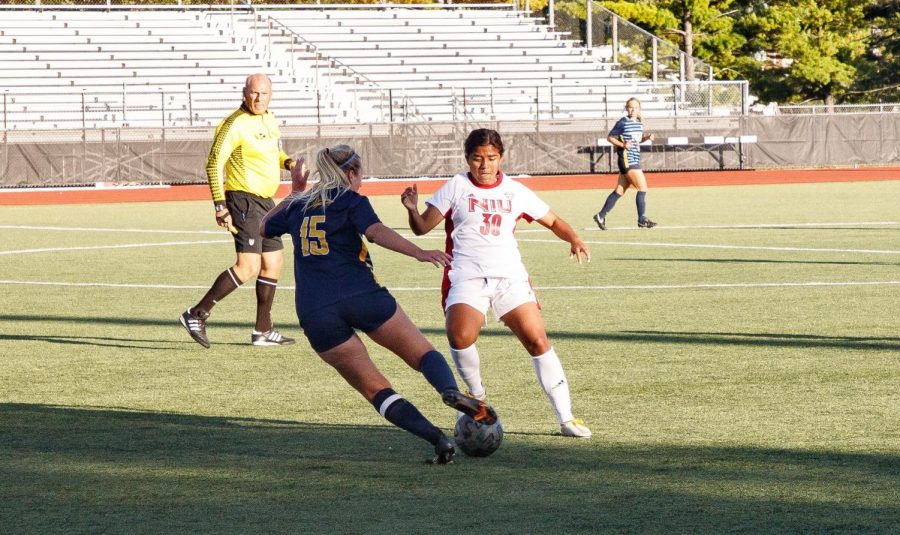 DeKALB — The women’s soccer team suffered a 5-0 blowout loss against Ball State University as the Cardinals scored five first half goals against the Huskies Sunday afternoon.

NIU entered Sunday’s game with a record of 5-10-2 as they traveled to Briner Sports Complex in Muncie, Ind. The hosting Cardinals, who stood at 4-9-2, were hosting their Senior Day.

The Cardinals began attacking the net first as senior defender Kennedy Metzger missed a shot in the fifth minute of the game. Four minutes later, an own goal by NIU gave Ball State an early 1-0 advantage.

In the 17th minute, Metzger found the back of the net to add a second goal to the scoreboard for Ball State. Redshirt senior midfielder Nicky Potts assisted Metzger.

The Huskies attempted a shot of their own seconds later as sophomore forward Kierah Meier made a kick toward the net from outside the box. Cardinals senior goalkeeper Alex DeRuvo saved the shot.

Ball State scored once again in the 29th minute, with sophomore midfielder Avery Fenchel scoring a goal that was assisted by senior midfielder/defender Jenna Dombrowski.

The Cardinals continued their scoring affair with yet another goal in the first half. Freshman forward Lexi Fraley of Ball State made a successful goal shot low left in the 32nd minute. Dombrowski provided the assist on the second consecutive goal.

Ball State scored their fifth and final goal of the game in the 35th minute of the first half. Ball State sophomore defender Abby Elgert scored with an assist by freshman midfielder Katelyn Fraser.

Despite a flurry of scoring in the first half, both teams went scoreless in the second half.  Ball State attempted 10 of its 18 total shots in the final 45 minutes. NIU had a sole goal attempt in the 64th minute from graduate forward Haley Hoppe, which missed just above the crossbar.

Senior goalkeeper Julia Lentz allowed all five Ball State scores in the first half while also recording two saves. After the period concluded, Lentz was replaced by junior goalkeeper Sadie McGill, who had four saves during her time holding down the net in the second half.