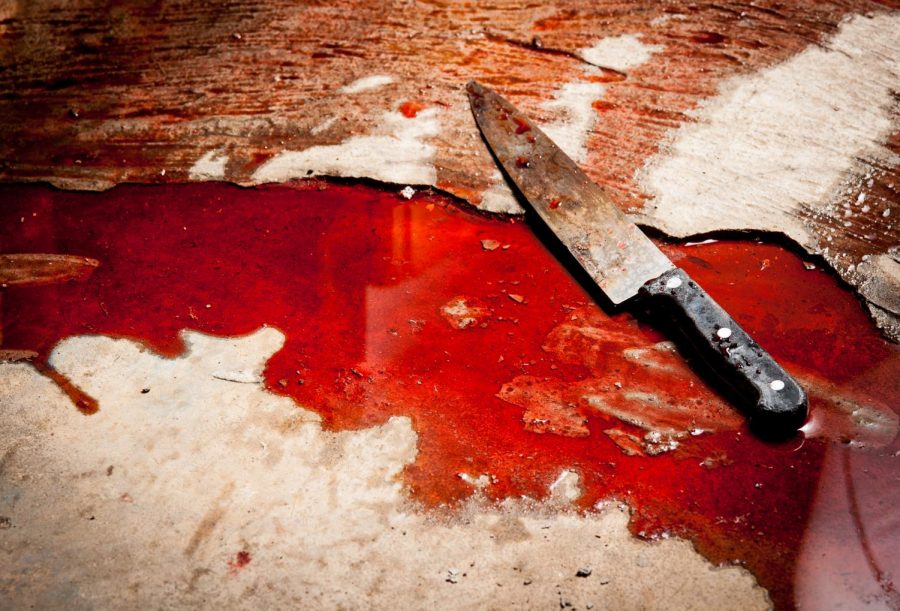 Sharp knife with blood on floor.

“Halloween” is a 1978 slasher film directed and scored by John Carpenter. Arguably one of the most popular franchises in this horror genre, and the introduction to Michael Myers, portrayed by Tony Moran, started with this film.

Taking place in the fictional Haddonfield, Illinois, Michael Myers, a patient incarcerated in a sanitarium for the inexplicable murder of his sister when he was 6 years old, escapes from the sanitarium the day before Halloween. Myers then continues on a murder spree to his hometown of Haddonfield. The terror increases as Michael stalks high school student Laurie Strode, portrayed by Jamie Lee Curtis in her debut film acting role. Michael’s psychiatrist Dr. Samuel Loomis, played by Donald Pleasence, is in a race against time to assist in the capture of Myers, who Loomis  believes is the essence of evil. He also uncovers the mystery of why Myers has come back to stalk Laurie Strode in particular, ensuing a trail of death and terror on Halloween night.

On initial release, the film performed well with audiences despite having little advertising and being an indie film. Praised for its climax and thrill but heavily criticized, this film eventually  became a legendary cult classic and even selected for preservation in the United States National Film Registry as  culturally, historically and aesthetically significant.

Themes that steer this film and resonate throughout the entire franchise include fear and the embodiment of evil. It has fascinated me how Michael Myers is not a supernatural character in nature, has no powers that we know of or does anything that specifically makes him a fearful presence. Myers doesn’t even move at a fast pace for most of the film but is still a menacing figure with his iconic mask, which was actually an old prop William Shatner mask that had been painted white for the film.

The bulk of the horror comes from the mystery of Myers’ actions, and what drives him to be so murderous. Nothing or anyone can get in his way, and the idea that evil never stops is spine tingling. This point is really touched upon thanks to the performance by Donald Pleasence as Dr. Loomis. In a relationship comparable to the fictional Van Helsing and Dracula, Dr. Loomis makes it his mission to make sure Michael Myers never escapes.

“Halloween” is a must-watch for any horror aficionado and is a classic frightful film that has spawned an iconic film franchise synonymous with the same celebrated tradition it is named after. The trail of terror begins with this film but has continued to this day with the most recent release of “Halloween Kills” on Oct. 15 in theaters and streaming on Peacock.