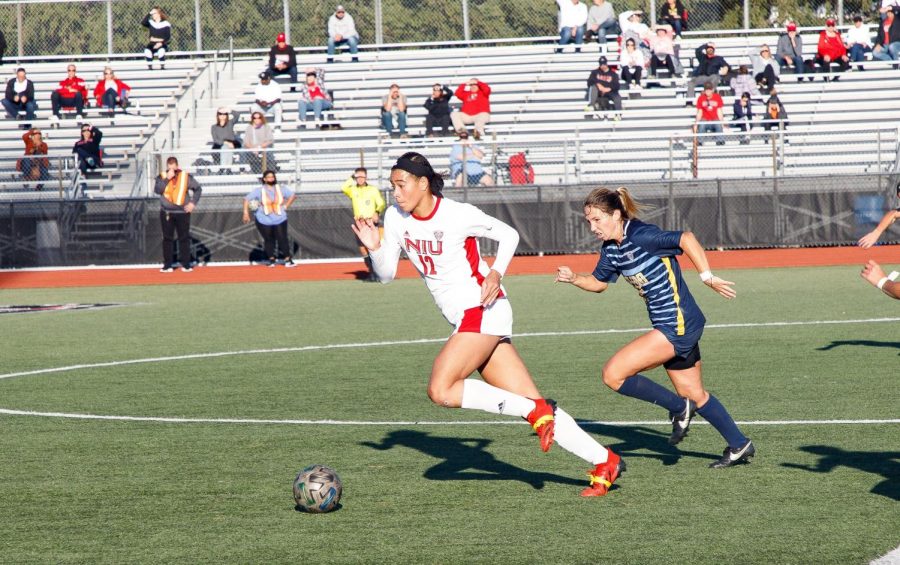 Graduate student forward Haley Hoppe dribbles past a defender during a match on Sept. 23. Hoppe is helping the next generation of women's soccer players while continuing to lead the Huskies offense.

DeKALB — The Huskies women’s soccer team and the Western Michigan Broncos faced off Thursday with the Broncos defeating the Huskies 6-0.

The first shot of the contest by redshirt senior midfielder Grace Louis came from the bottom center but was saved by fifth-year goalkeeper Maggie Rogers. The Broncos would respond in the next minute when fifth year forward Bailey Korhorn would attempt a shot but would not connect with the back of the net.

In the 23rd minute, sophomore forward/midfielder Jenna Blackburn scored for the Broncos with an assist by senior defenseman Kai Sugiyama to give the Broncos a 1-0 lead.

The goal by the Broncos carried their momentum, with another two shots coming in the 26th and 29th minute by Korhorn. Korhorn was unable to score.

Redoute and Korhorn acted as a catalyst for the Broncos, setting their teammates up for goals along with being aggressive in finding their own shot chances. The Huskies finished the first half with two saves, yet the Broncos had a total of nine shots and a 3-0 lead going into halftime.

WMU continued their aggressive play on offense in the second half, shooting the first three shots of the period.

In the 54th minute, senior defenseman Claudia Schilling scored a goal assisted by freshman midfielder Mary Dziuba to extend the Broncos’ lead to 4-0. NIU attempted to get to the box and score but was unable to get things going offensively.

In the 63rd minute, freshman midfielder/forward Edith Delgado attempted a shot in the bottom left, but it was saved by Rogers. A few minutes later, the Broncos would respond back at the other end.

In the 75th minute, Redoute scored another goal off an assist from junior midfielder/forward Jorden Campbell, stretching the lead to 5-0.

In the 82nd minute, Korhorn made her way back in the box for a goal, coming off an assist from Campbell, giving the Broncos a 6-0 lead over the Huskies.

After WMU’s final goal, the Huskies never scored or attempted another shot in the contest. Senior goalkeeper Julia Lentz finished with eight saves for the Huskies.