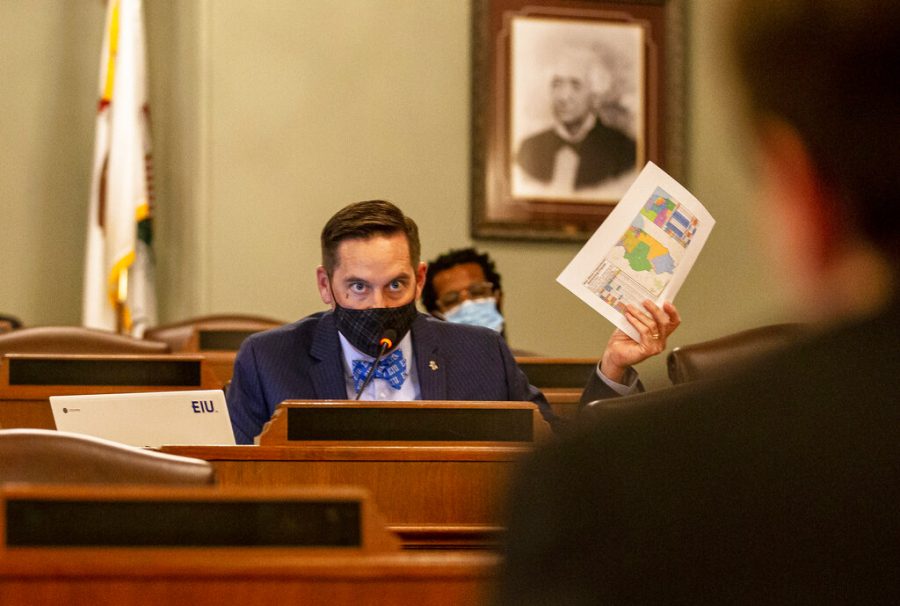 Representatives in Springfield passed a new congressional district map to take effect for the 2022 midterm.
The vote passed straight down party lines and Gov. Pritzker is expected to sign the map into law.
NIU does not expect to see a change in how it conducts business in Washington.
The university’s top priority in Washington remains to advocate for a doubling of the federal Pell Grant.

DeKALB— The Illinois General Assembly approved, down straight party lines, a new map of Illinois congressional districts during the early morning hours Friday. This was the legislature’s fourth version take at the process to appease the Illinois Democratic caucus and Democratic leaders in Washington who are looking to maintain power after the 2022 midterm election.

The voted upon map sees Rep. Bill Foster (D-11) as the representative for the NIU, DeKalb and Sycamore community, according to a FiveThirtyEight interactive map. NIU is expected to fall into the 11-congressional district which is held by Rep. Lauren Underwood (D-14). NIU was previously represented by Rep. Adam Kinzinger (R-16). Kinzinger announced Friday he would not be seeking reelection in the 2022 midterms.

Congresswoman Underwood has officially visited NIUs campus on many occasions and is looking forward to building her relationship with the university and its students further over the next decade.

“Congresswoman Lauren Underwood is looking forward to deepening her relationship with the students and community of Northern Illinois University. Just last week, she met with a group of NIU student leaders on campus to hear about the issues that matter most to them. The Congresswoman has always been committed to making sure young people have a seat at the table and will continue to make sure their voices are heard in Congress.” Underwood said in a statement to the Northern Star.

Illinois lost one congressional seat during this decade’s redraw due to a population decrease from the U.S. Census conducted in 2020. The loss of one seat, while impactful to regions of the state, does not seem to change how NIU will conduct business in Washington going forward.

“I view it as we (NIU) have the whole delegation,” said Anna Quider, assistant vice president for Federal Relations. “We have people across the whole state, so that’s how I approach it.”

Quider said that NIU has students and faculty that come from every congressional district in the state, so keeping a relationship with the whole delegation is beneficial.

“Plenty of the things that we advocate for, like student financial aid, are a people-based thing,” Quider said. “Where are they considering themselves a constituent.”

NIU’s role in Washington is strictly non-partisan, meaning that the university does not take a stance on political issues, regardless of how the districts might swing.

“(NIU) is still going to work with the members of Congress that are sent to Washington by the people of the state of Illinois,” Quider said.

As the new maps take effect for the 2022 midterm elections, the university’s position and process have not changed with the news.

“Our number one priority is increasing student financial aid and specifically Pell Grants,” Quider said. “Our job is to elevate the needs and priorities of our students, faculty, staff and so that’s what we will do to evaluate our primary needs.”

Regardless of who physically sits in NIU’s backyard, the university’s influence in Washington is expected to remain strong throughout the process.

Gov. J.B. Pritzker is expected to sign the new legislative boundaries once they arrive at his desk.

This story was updated to include Congresswoman Lauren Underwood’s statement on the drawing of the 11 congressional district which she represents.