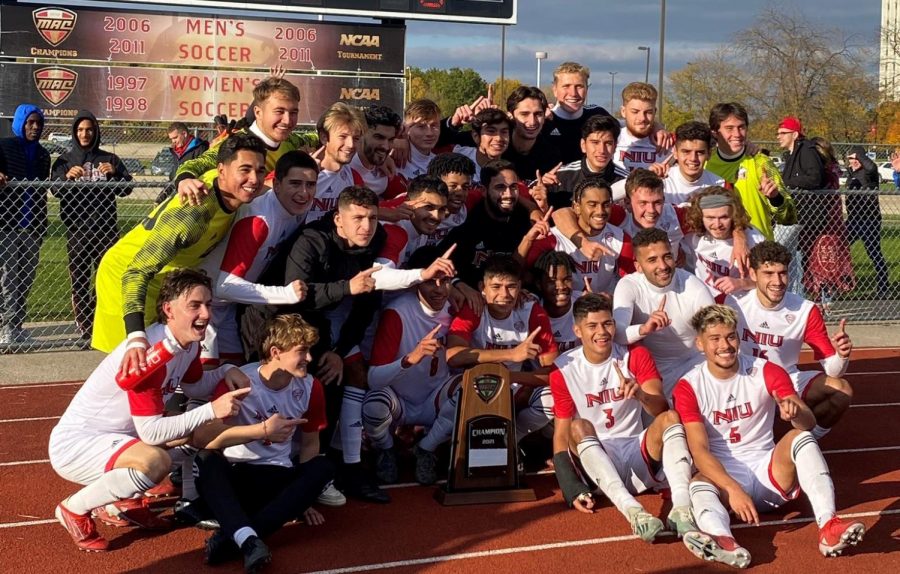 The first big chance of the game came in the eighth minute when redshirt junior forward Enrique Banuelos shot towards the bottom right of the goal. The shot was saved by senior goalkeeper Will Meyer keeping the game scoreless.

“I just grabbed it and as soon as it left my foot I knew it was going in,” Martinez said.

Only a couple moments later in the 24th minute, senior defenseman Anthony Markanich crossed a ball to Nick Markanich, who volleyed the ball off his right foot and shot towards the net. Meyer made the save and cleared it out for the Zips.

At the end of the first half, NIU held 48% of the possession and put seven total shots on goal. The Zips held the majority of possession but were held to only three total shots.

In the 55th minute, Akron had a chance to tie the score. Freshman midfielder Dyson Clapier sailed a ball high for redshirt junior goalkeeper Martin Sanchez to deflect over the crossbar, leading to an ensuing corner kick for the Zips.

Akron evened the score in the 63rd minute when a botched clearing attempt by NIU opened a scoring chance for sophomore forward Ryan Kingsford to put the ball in the net and make the score 1-1.

A hand ball by Akron set up Enrique Banuelos to become the hero with a chance to take the lead with a free kick in the 81st minute, but the shot sailed over the top of the net.

In the 84th minute, Anthony Markanich passed a through ball to Nick Markanich, who fought off his defender and put the ball in the back of the net for his 14th goal of the season making it a 2-1 ball game.

“We felt it coming,” Nick Markanich said. “I told him (Anthony) to look for me and it happened. We are happy it worked out.”

With the win, the Huskies clinched the number one seed in the MAC tournament and also ensured that the tournament would be played in DeKalb starting Nov. 10.

“I thought the Huskies crowd was tremendous,” head coach Ryan Swan said. “It truly makes a difference when the guys are getting excited about scoring and the crowd is there making so much noise. The whole crowd was really into it today. While the victory obviously goes to our guys, everyone with Huskie Athletics and Huskie nation can take credit for some of this championship.”

NIU will be back in action 6:30 p.m. Wednesday as they travel to Portland, Oregon to take on the University of Portland Pilots in their regular season finale.