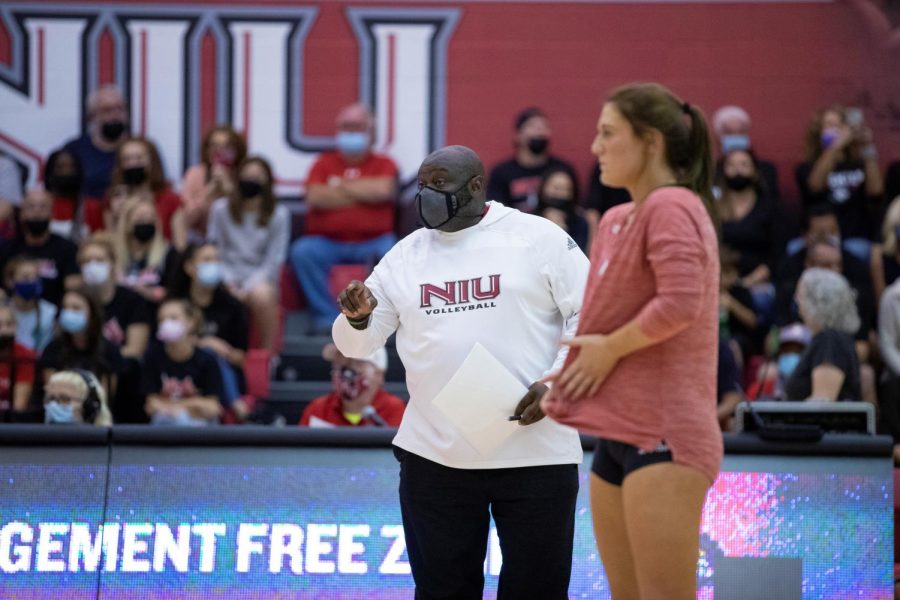 Head volleyball coach Ray Gooden coaches on his team during a Sept. 18 game against Wisconsin at Victor E. Court.

DeKALB — With the Mid-American Conference tournament happening in less than a month, the volleyball team was unable to take sole possession of the sixth and final playoff spot after being swept in straight by the Ohio University Bobcats.

Bobcats freshman outside hitter Caroline Clippard and fifth-year right-side hitter Maggie Nedoma each recorded a kill to tie the game.

The teams stayed tied until Bobcats junior outside Oliva Margolies sparked a 3-0 run to give Ohio a 7-4 lead over the Huskies. Freshman middle blocker Charli Atiemo brought the Huskies within one after a kill and block on two straight plays. The Huskies caught a break with a Bobcats service error that led to a kill by freshman outside Nikolette Nedic to tie the game at 10-10.

The Bobcats responded with another 3-0 run, with Clippard putting down two more kills to give them a 13-10 lead. The Bobcats kept growing the lead, using a flurry of smart shot selections from Nedoma, Margolies and Clippard, respectively.

The Bobcats were not afraid to tip the ball over blocks or give up a power shot for a more accurate one, something that Huskies head coach Ray Gooden was not expecting.

“I did not do a good job of getting our team ready to play (Ohio) tonight,” Gooden said. “I take full responsibility for that output.”

The Bobcats were able to grow the lead to 18-12, forcing a Huskies time out. The teams traded possessions back and forth, until a Margolies kill ended the set 25-16.

The second set was a rollercoaster for the Huskies. NIU’s sloppy play early, alongside the Bobcats’ stellar offense play, led to a 9-4 deficit for the Huskies that forced a timeout.

Clippard put two straight kills down to cut the Bobcats deficit to one. Atiemo and Clippard traded kills back and forth on three straight possessions and eventually the teams reached a 22-22 tie. Junior setter Grace Balenseifer gave Nedic a shot on the next possession, but Nedic hit it wide and gave the Bobcats the lead. Nedic got another shot at tying the game and capitalized with a kill off a Bobcats blocker to tie the game 23-23.

Ohio’s Nedoma responded with a kill, putting the team one point away from winning the set. Ohio sophomore libero Sam Steele would end the set with an impressive short serve to give the Bobcats a 25-23 win over the Huskies.

The Huskies put in all their energy into that second set, and it showed in the third. The Bobcats took a quick 4-1 lead to start the set and would not look back. As the Bobcats lead grew to eight, the Huskies burned their two timeouts but it wouldn’t help to slow down their opponent. The Bobcats eventually won the set 25-16.

“We’re gonna keep battling, the mission is simple, we have to go out there and have positive outcomes,” Gooden said. “We just gotta continue to trust ourselves and get better each night.”

The Huskies return to action at 6 p.m. Friday when they play the University at Buffalo Bulls at Victor E. Court.