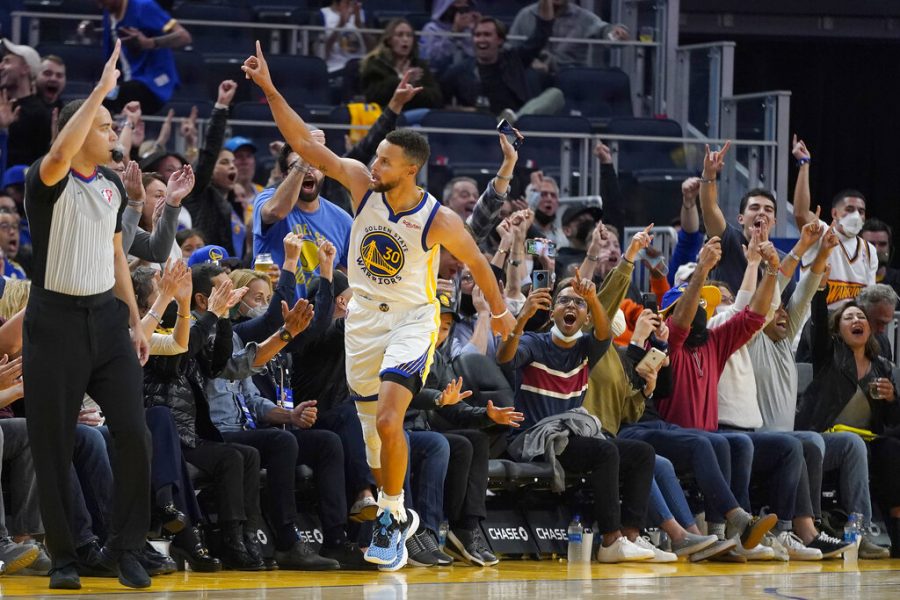 The 2021-22 NBA season has begun, and there are many favorites who may win NBA regular season awards. Players such as guards Ja Morant, Lamelo Ball and Anthony Edwards, along with forward Miles Bridges are having breakout seasons and chasing regular season awards early-on.

Curry has had to carry the Warriors for two seasons now, with Thompson being out. Thompson’s injury has made Curry more focused and aggressive as a player.

Golden State missed the playoffs last year despite Curry averaging 32.0 points-per-game and finishing in the top three in MVP voting. Unfortunately, Curry did not win MVP, and many believed he was robbed.

Curry won the scoring title, moved up to second on the all-time three-point-scoring leaders, yet still did not win MVP.

This year, Curry will become number one on the three-point-scoring list and take home the MVP, making it his third since 2016.
Most Improved Player: Miles Bridges
Charlotte Hornets forward Miles Bridges will claim the most improved player award. After averaging just 12.7 points last season, Bridges has already doubled that early into this season, averaging 25.5 points-per-game .


Defensive Player of the Year: Bam Adebayo
Miami Heat center Bam Adebayo being six-foot-nine does not stop him from being a defensive threat.

Adebayo gives his all on defense with his hustle to guard every position and his shot-blocking ability. Adebayo totaled 93 blocks in the 2019-20 season and 66 blocks in the 2020-21.

Adebayo will win Defensive Player of the Year because he’s a versatile and active defender with great lateral speed and is the anchor for his team’s defense.
Rookie of the Year: Scottie Barnes
Toronto Raptors forward Scottie Barnes was selected fourth overall in this year’s NBA draft and has been making noise.

Barnes can give teams trouble on both ends of the court, averaging 17.7 points-per-game and 8.3 rebounds-per-game. On the defensive end he tends to guard team’s best ball handlers such as Dallas Mavericks guard Luka Doncic, Chicago Bulls forward Demar Derozan and Boston Celtics forward Jason Tatum.

Barnes will win Rookie of the Year because he has shown that he is not scared to play in the big leagues and makes his presence known every time he steps onto the court.
Executive of the Year: Bulls general manager Marc Eversley
The Chicago Bulls general manager Marc Eversley made many changes this summer to make the Bulls great for the first time since 2017.

Eversley made new additions to play alongside guard Zach Lavine, like forward Demar Derozan, guard Lonzo Ball and guard Alex Caruso. Eversley even drafted Chicago’s very own and 2020 Bob Cousy Point Guard of the Year Award winner Ayo Dosunmu out of the University of Illinois.

This new Chicago team is off to a great start because of Eversley making the changes that need to be made. The team started off last season great but ended badly due to injury and not having star players to step up. Eversley will win Executive of the Year in the process of the Bulls having a great season.
Sixth Man of the Year: Montrezl Harrell
Washington Wizards forward Montrezl Harrell has benefitted his new team and is on his way to winning his second Sixth Man of the Year trophy.

For years, Harrell has made it clear that he can get the job done by coming off the bench, and he has done that so far this season. Harrell is averaging 19.2 points and 9.4 rebounds per game so far.

Spoelstra has managed to rotate these players on the court so they make an impact right when they need to. The Miami Heat are now 5-1 in the east and are ranked number four in defense according to NBA statistics.

His brilliant coaching abilities will win him his first Coach of the Year because of how talented his team is and how his team shows hustle every time they step on the floor.