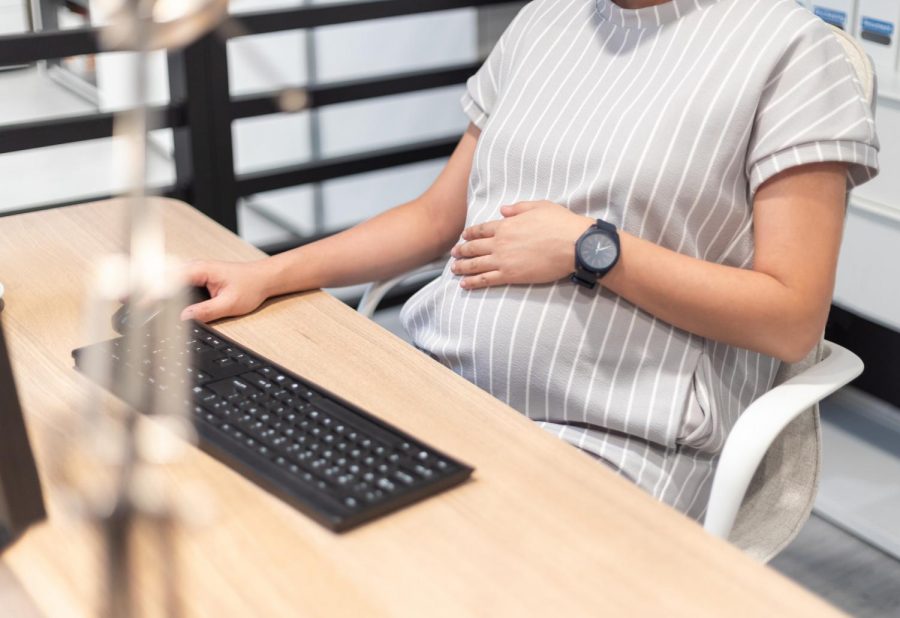 A pregnant women sits at a desk. Maternity leave is time that mothers take off after childbirth. This time not only allows them to recuperate after such a physically demanding ordeal but also allows time for them to bond with their children.

Maternity leave is time that mothers take off after childbirth. This time not only allows them to recuperate after such a physically demanding ordeal but also allows time for them to bond with their children.

This time is especially important for a child’s development because the infant discovers trust in the mother, their needs and how those needs are met. Mothers also begin to practice breastfeeding, which can take time to adjust to, said Melissa Clucas Walter, a professor in NIU’s College of Health and Human Sciences. By the time the infant is eight months old, true attachment has occurred.

But in the United States, mothers are allowed only 12 weeks of unpaid leave per year under the Family and Medical Leave Act of 1993. The criteria for those 12 weeks are that you have to work at a company of 50 or more people that’s 75 miles from where you live, have worked with said company for one year, and have clocked in 1,250 hours in that year.

In the eight months it takes for the infant to truly attach to the mother, only the first three are guaranteed before the mother has to go back to work.

The time allotted is simply not enough. These 12 weeks can be applied to mothers taking maternity leave, people recovering from serious illness or people caring for sick relatives. If someone gave birth in January and used all 12 weeks but had to care for a sick relative in November, they would have to dig into their sick days or vacation days.

While some states do have paid maternity leave, like New York’s eight weeks, it’s still incredibly rushed. Having short maternity leave feels less like wanting the mother to connect with their child and more like rushing women to get back to work. This rush is completely unnecessary.

This is part of a larger issue of America not respecting mothers and families through legislation. For many of us, our mothers are hard-working role models, but there’s no nationwide law guaranteeing paid maternity leave.

Unfortunately, it will take time for America to warm up to giving mothers the proper amount of time off. So, for now, the best and most realistic goal is to get the 12 weeks of guaranteed paid leave, Clucas Walter said. Even this has proven to be tough.

Section 130001 of the Build Back Better Act would have originally given 12 weeks of paid leave. However, negotiations amongst Democrats have ground that number down to four weeks which President Joe Biden revealed on Oct. 21 at his CNN town hall in Baltimore, Maryland.

At this point, fighting for four weeks just doesn’t seem worth it. There should be a greater push to either amend the FMLA or to enact new laws guaranteeing 12 paid weeks of leave.

Call and write your representatives and senators and tell them you support these changes as well as the original version of Section 130001 of the Build Back Better Act.

There are 42 states that don’t have publicly funded paid maternity leave. Illinois is one of them. Contact your local representatives and senators and tell them you support legislation that gives Illinoisans 12 weeks of paid leave. If the federal government doesn’t support mothers, maybe state governments will.