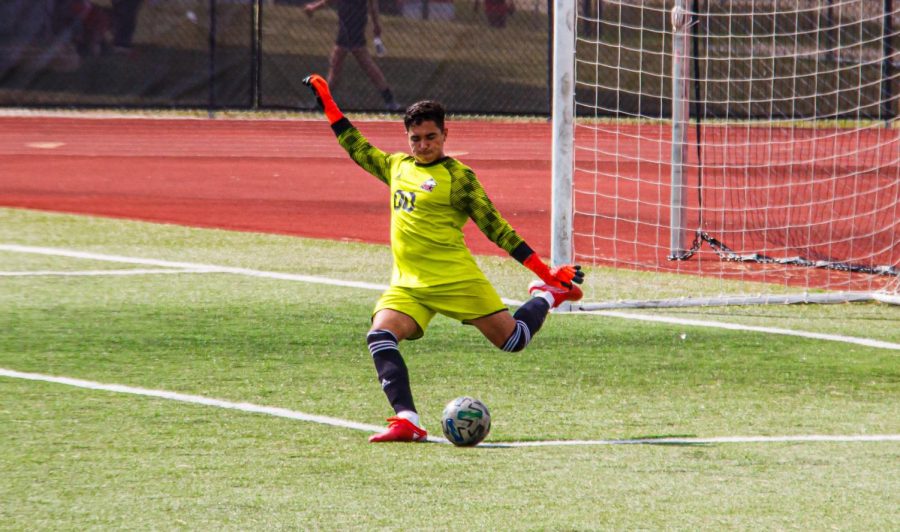 Redshirt junior goalkeeper Martin Sanchez lines up for a goal kick in NIU's match on Aug. 26 against Purdue-Fort Wayne. The Huskies haven't allowed a goal in 501 minutes of play, or five complete games.

DeKALB — Poor defensive play and scarce shooting chances for the Huskies led to the NIU men’s soccer team falling to the University of Portland Pilots 4-0 Wednesday night in Portland, Oregon.

With the loss, the Huskies end a 13-match unbeaten streak and fall to 12-2-2 to finish the regular season.

“The result was probably a fair reflection of the game,” head coach Ryan Swan said in a Wednesday NIU Athletics news release. “Portland was better than us tonight, almost everywhere. It was a poor outing from us, and obviously that is a big disappointment, both in the way that I prepared the team and in the way that we came out and performed today.

From the opening kickoff, NIU looked a little out of sorts but still had a few good chances to take the lead early. In the sixth minute, senior forward Nick Markanich hit the crossbar on a shot from the top of the 18-yard box.

A few minutes later in the 16th, Portland freshman defenseman Kevin Bonilla found sophomore midfielder Jacob Babali, who scored from inside the six-yard box to make the score 1-0.

In the 22nd minute, the Huskies redshirt junior forward Enrique Banuelos shot a ball that hit the bottom of the post and bounced out of bounds for a goal kick.

Coming out of halftime, NIU once again had a prime opportunity to score as Nick Markanich crossed a ball in the box to freshman forward Zachariah Thomas, but the ball was tapped away by the Pilots defense.

In the 60th minute, a turnover by the Huskies led to Atem Kato scoring for the pilots and putting Portland up 3-0.

In the 77th minute, sophomore forward Buba Fofanah found the back of the net from the six-yard box to put the pilots up 4-0.

“After Saturday’s excitement, this was always going to have a different feel to it,” Swan said. “We knew this was an important game for Portland, and for ourselves. I certainly didn’t think we came out with the same energy and excitement as we had the last couple of conference games.”

NIU will have the week off before returning home to host the Mid-American Conference tournament. The first-seeded Huskies will face off in the semi-finals at 6 p.m. on Nov. 11 against the fourth-seeded team.

The tournament will be set following the conclusion of conference play on Thursday.