NIU puts up a fight Friday, gets blown out Saturday in losses to Maryville 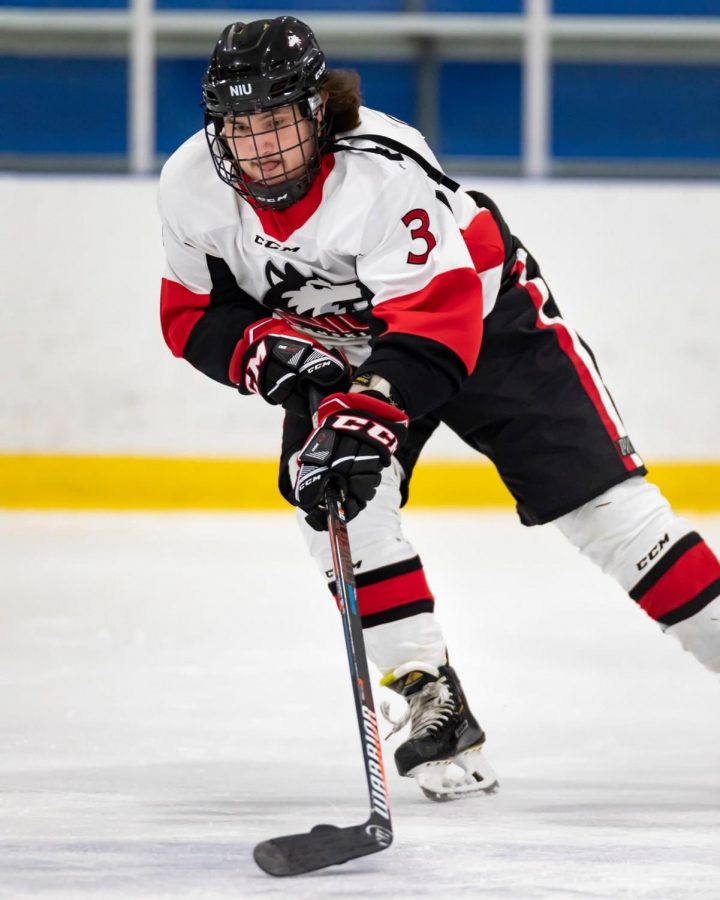 Junior defenseman Drake Gieseke handles the puck during NIU's Sept. 24 game against Purdue Northwest. The two losses to the Pride put NIU at 0-4 to start the season.

DeKALB — The NIU hockey team suffered consecutive losses against the Maryville University Saints by 6-3 Friday and 8-1 Saturday.
Friday: Saints 6, Huskies 3
Maryville’s early start on Friday allowed them to claim the lead early and maintain the advantage throughout the game.

“We knew we were going up against a tough team,” head coach Nicholas Madonia said. “It was going to be our toughest test. We had chances and gave them a really tough game (Friday).”

The first period of Friday’s game featured two consecutive goals by Maryville and a goal by NIU. The Saints scored first with a strike toward the back of the net by Maryville freshman center Will Smith in the eighth minute. Maryville senior left winger Kole Mudra followed up with an additional goal just under seven minutes later.

NIU responded with its own goal as the period was winding down as junior forward Hunter Wahl sent the puck into the net with 19 seconds left, putting Maryville at a 2-1 advantage.

The game’s second period saw a similar pattern of scoring as the first. The Saints tacked on goals from senior right winger Damian Caringi and senior center Jack Harrison in the third and 16th minutes of the period. NIU junior forward Rodahn Evans notched a goal in between the two Maryville goals, scoring in the tenth minute.

An additional three-score period between the two teams in the final period allowed Maryville to secure a 6-3 win on the opening day of the series. Caringi scored for the second time of the game on a power play just under three minutes into the period. Huskie junior forward Nicolas Gonzalez scored NIU’s final goal of the game with five minutes remaining before Maryville junior center Bradley Boudreau answered with the game’s final goal on an empty net.

“For four periods, we had our best defensive effort of the season,” Madonia said. “On Friday and the first period Saturday, they had to earn everything they got.”
Saturday: Saints 8, Huskies 1
NIU opened Saturday’s game with the first score as senior forward Brandon Ledyard made a goal at the seven-minute mark. The momentum shifted soon afterward as Maryville went on a scoring streak. The Saints answered Ledyard’s goal with one from Maryville’s Harrison to even the score at 1-1.

From there, Maryville ran up the score with three goals in the second period and four in the third. Harrison and Boudreau of Maryville both led the game in scoring after each recorded two goals. Maryville’s Caringi also had a goal during the game, which allowed Boudreau, Harrison, and Caringi to finish the weekend with three goals each.

“They took advantage of some situations,” Madonia said. “That was a good hockey team. It’s the best team we’ve played so far this season.

The series allowed all three goaltenders on the roster to see game action. Senior goaltender Brian Eisele defended the net for the Huskies Friday. Eisele was able to save 37 of 42 scoring attempts at the net. After playing in five consecutive games, Madonia gave Eisele time to rest.

“(Eisele) played very well on Friday,” Madonia said. “He wasn’t 100% on Saturday, so we decided to go with some fresh legs.”

Saturday’s game saw sophomore goaltender Benjamin Vutci and freshman goaltender Grant Goodson split time. Vutci manned the goal for the first 50 minutes of the game before he was relieved by Goodson, who closed out the game. Vutci had 30 saves on 37 shots toward the goal, while Goodson recorded seven saves on eight attempts.

The Huskies will return home for their next game as they prepare to take on a familiar opponent in the Midland University Warriors. In their last two games earlier this season, the Huskies fell to Midland 4-1 on Oct. 22 and 5-2 on Oct. 23.

“Obviously, it’s been a struggle this season,” Madonia said. “We know that we have a big hill to climb because it’s only our second year playing at the Division I level.”

The first game of the series will begin at 7:30 p.m. Nov. 19 at Canlan Ice Sports in West Dundee.