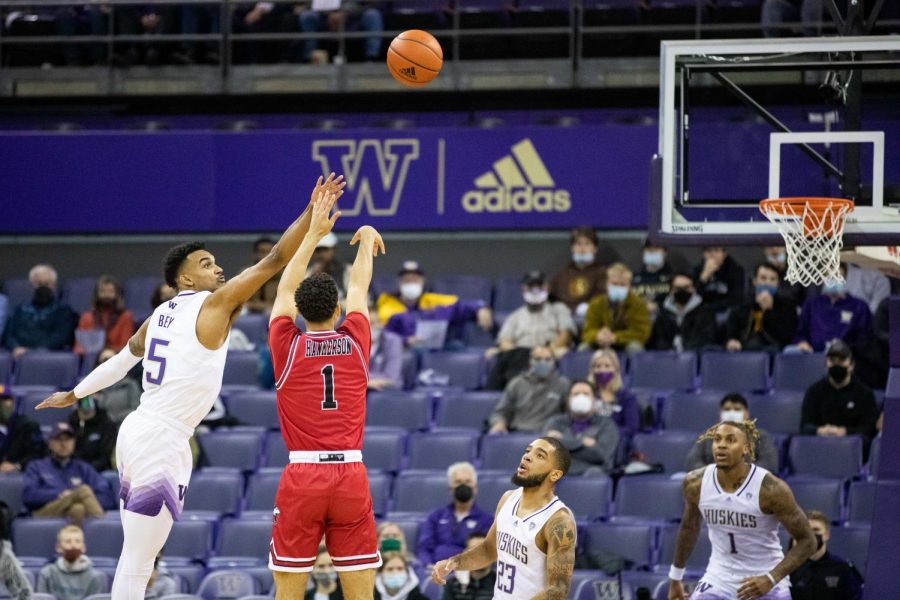 DeKALB — The first game of the coaching tenure of men’s basketball head coach Rashon Burno saw the NIU Huskies earn a 71-64 victory on the road against the University of Washington Huskies Thursday in Seattle, Wash.

A career-best outing for senior guard Trendon Hankerson, who posted 28 points for the game, helped guide NIU to its upset win over Washington.

“A lot is expected of (Hankerson), and he rose to the challenge,” Burno said. “He’s had some good, bad and ugly days, but he’s always willing to show up the next day and put a hard day’s work in. I’m super excited for him.”

NIU began the scoring with a successful free throw attempt by senior center Adong Makuoi within the game’s first minute.

NIU’s largest advantage of the first half occurred after a jumper by senior forward Chinedu Kingsley Okanu that put NIU ahead by 16 points at 33-17. Senior guard Anthony Crump assisted Okanu’s shot.

Hankerson finished the opening half as the only player from either side with double-digit points, totaling 11 points after 20 minutes of play. Hankerson closed out the scoring in the first half with a three-pointer in the final seconds of the half. NIU entered halftime, holding a 36-27 advantage over Washington.

Washington eventually stormed back in the second half to tie the game at 51-51 with 5:47 remaining in the game. Redshirt junior forward Nate Roberts of Washington made a free throw soon after to give them their first lead since the seventh minute of the first half.

A three-point jumper shot by Hankerson allowed NIU to move back in front. NIU remained as the frontrunner until the final buzzer, securing their first win of the 2021-2022 season.

The upset victory for the Huskies from DeKalb was also the first win in Burno’s head coaching career, previously being a Pac-12 assistant coach at Arizona State University.

“It feels good,” Burno said. “I’m super excited for the players. I tell my guys that this is about the team. We wanted to make this a team game. (Washington) had to beat us as a better team.”

In anticipation of their next matchup against the University of Indiana-Bloomington Friday, NIU plans to celebrate their season-opening victory but plans to learn from their mistakes on Thursday.

“There’s a tremendous amount of learning from this footage,” Burno said. “We gave up 27 offensive rebounds, so there’s a ton we have to get better at. There’s no riding this (victory) into Indiana. We’ll start from ground zero. The motto of our program is that the next day, you gotta be willing to start over.”

Friday’s road contest against the Indiana Hoosiers is set to start at 6 p.m. at Simon Skjodt Assembly Hall in Bloomington, Indiana. The game will be broadcast on BTN+.