The over and underachievers of the NBA so far 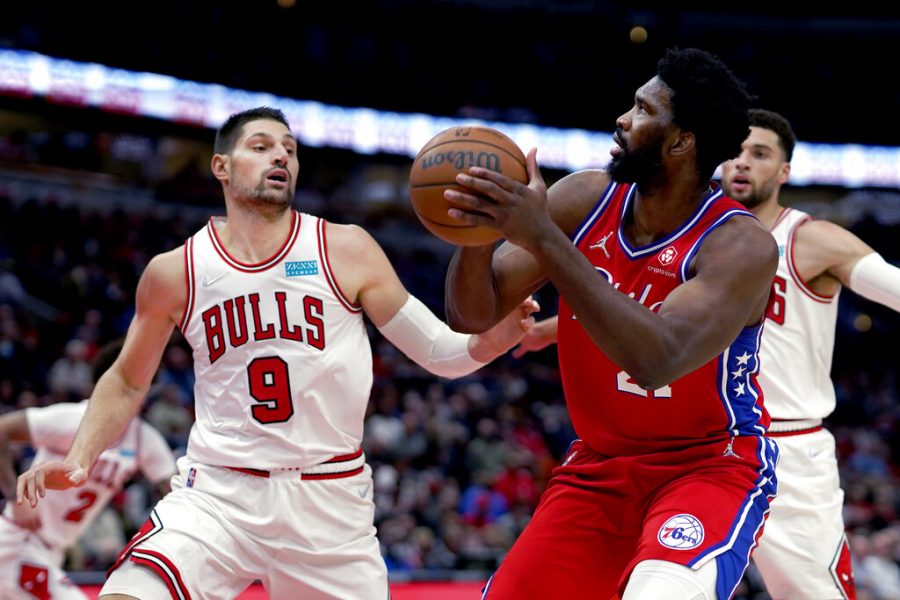 Philadelphia 76ers' Joel Embiid looks to shoot as Chicago Bulls' Nikola Vucevic (9) and Zach LaVine defend during the first half of an NBA basketball game Saturday, Nov. 6, 2021, in Chicago.

Some teams are raising eyebrows early in the NBA season, while other teams have underachieved thus far.

A few teams that have been performing above expectation this season are the Golden State Warriors, Philadelphia 76ers, and the Chicago Bulls. The Los Angeles Lakers, Brooklyn Nets, and Atlanta Hawks have shocked fans most in how they’ve failed to live up to high hopes.

The Golden State Warriors have the best record in the NBA at 9-1 and lead the NBA in points per game, defense and three-pointers. Golden State is also second in three-point percentage.

The Warriors have gotten off to a hot start despite not having center James Wiseman and five-time NBA All-Star guard Klay Thompson. Depth has been big for the Warriors this season, receiving a lot of production off the bench from guard Damion Lee, guard Gary Payton II, forward Otto Porter, Jr. and former NBA champion forward Andre Iguodala.

Many did not expect  the Warriors to get off to this hot start, and the Warriors have put the rest of the league on notice.

The Philadelphia 76ers are another team surprising most this season. The Sixers are currently half a game behind first in the Eastern Conference without the help of three-time All-Star Ben Simmons.

There were questions coming into the season on whether the 76ers would be able to compete at a high level with all the drama surrounding Simmons’ unwillingness to play.

Center Joel Embiid, guard Seth Curry, forward Tobias Harris and center Andre Drummond have been stepping up in the absence of Simmons. Harris, Embiid and Curry are all averaging over 15 points per game. Drummond comes off the bench providing a spark of energy and effort for the Sixers, averaging 6.7 points and 10.1 rebounds per contest.

The Sixers are not a favorite to come out of the east but are not to be taken lightly.

The Chicago Bulls are another team staggering the rest of the league. The Bulls are 8-3 and are tied for the best record in the conference.

In the offseason, teams questioned if the Bulls’ additions of guard Lonzo Ball, guard Alex Caruso, guard DeMar DeRozan and others would be enough to propel them in the Eastern Conference.

The Bulls won eight straight games before a loss to the New York Knicks on Oct. 28. During the course of their season, rookie guard Ayo Dosunmu, forward Derrick Jones Jr. and guard Javonte Green have given them great contributions off the bench in each game this season.

The last time the Bulls had a stretch of 11 games, this good came in the 1996-97 season when they won a title.

The Los Angeles Lakers season could not have gone any different than they had planned.

The Lakers are currently in eighth place in the Western Conference, just above .500, with a 7-5 record.

Westbrook currently leads the league in turnovers with 4.9 per game, and it is evident that the turnovers are affecting the success of himself and the Lakers.

LeBron is no stranger to coming back from a large deficit, but with this additional help, many question how and if they will be able to exceed expectations.

The Brooklyn Nets’ season has not gone the way they imagined by starting without superstar guard Kyrie Irving.

Many experts and websites have the Nets as a favorite to win the title, but not with guard James Harden playing below expectations this season. Forward Kevin Durant has been continuing his tear from last season, leading the league in scoring with 29.5 points per game.

Without the help of Irving and struggles from Harden, the Nets have not been the team they saw from last season. The bench has improved for the Nets, but they have to pick up more of a load which may be more than they can carry down the stretch.

The Atlanta Hawks have not been able to get it going, currently sitting 12th place in the Eastern Conference.

Last season, the Hawks made it to the Eastern Conference finals and lost to the Milwaukee Bucks 4-2. Guard Trae Young has had to adjust to the new foul call, which has decreased his scoring significantly. The Hawks made a deep postseason run last year but won’t be able to repeat such fortune if the offense can’t click like it once did.