Veterans Day ceremony thanks members for their service 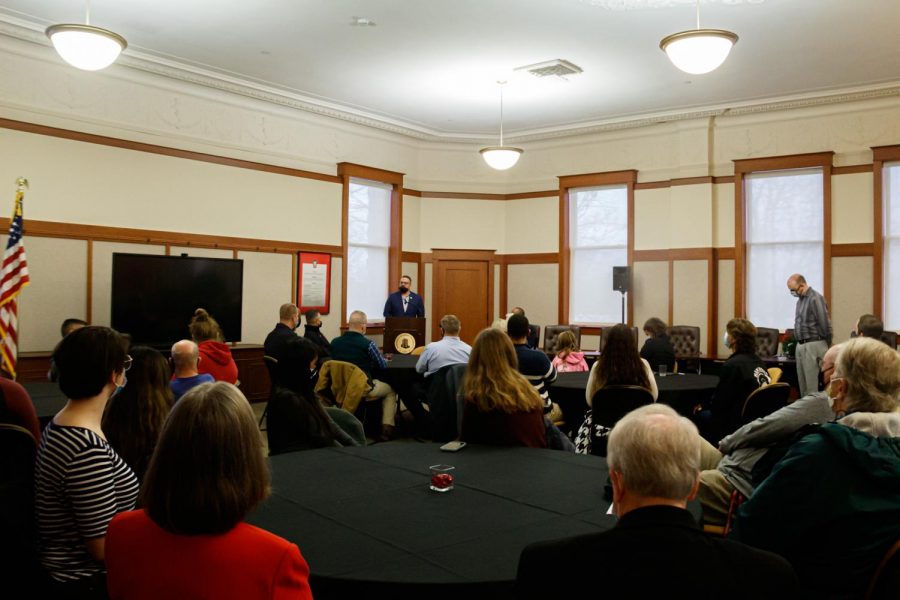 By Aidan Bengford and Yari Tapia

DeKALB — Nate Johnson, a veteran and NIU alumnus, spoke about his own struggles Thursday: getting his degree and overcoming the obstacles he faced right out of the military. Johnson was homeless and had to wait to attend NIU and continue to persevere into his master’s in public administration.

“Everyone has roadblocks and pitfalls, but this is not what ultimately defines our presence in this world,” Johnson said.

This Veterans Day, the Military and Veteran Services held a ceremony and Warrior’s Brunch to honor veterans, especially those here at NIU. The ceremony was to be held at 11 a.m. outside of Altgeld Hall, but it was not held outside due to weather concerns.

The ceremony discussed issues with mental health that are common among veterans. Veterans like Johnson often have difficulties coming out of the military.

“One suicide a day is too many, today we average in between 20 and 22 suicides per day,” Johnson said. “We are not expecting handouts, but we do expect an opportunity to be great.”

Stephen Frohling, a first-year history major, attended the event and is currently serving with the army.

Kirk Williams is a senior nonprofit and NGO studies major and is a veteran.

Frohling and Williams said they had just met each other Thursday. Their service gives them a unique perspective and experience.

“We all have a big respect for each other because we know what it took to become a veteran,” Williams said.

There were other veterans at the ceremony who were not NIU students. Don Willrit, a 75-year-old Malta resident, served during the Vietnam War. He said the military service was valuable to him.

“I was a veteran in ‘71 or ‘69 to ‘71, served in Washington, DC,” Don Willrit said. “It was a great time in my life and they helped me and educated me, and I learned a lot about government.”

Susan Willrit, Don Willrit’s wife, expressed her gratitude towards all the veterans and everyone who helped at the event.

She also said she tries to be patriotic during Veteran’s Day.

“My dad really instilled that in me, and he was a World War II veteran and he’s no longer living,” Susan Willrit said.

Don Willrit gave his input on the event.

“It was good,” Don Willrit said. “It was short and sweet.”