Soccer one win away from NCAA tournament berth 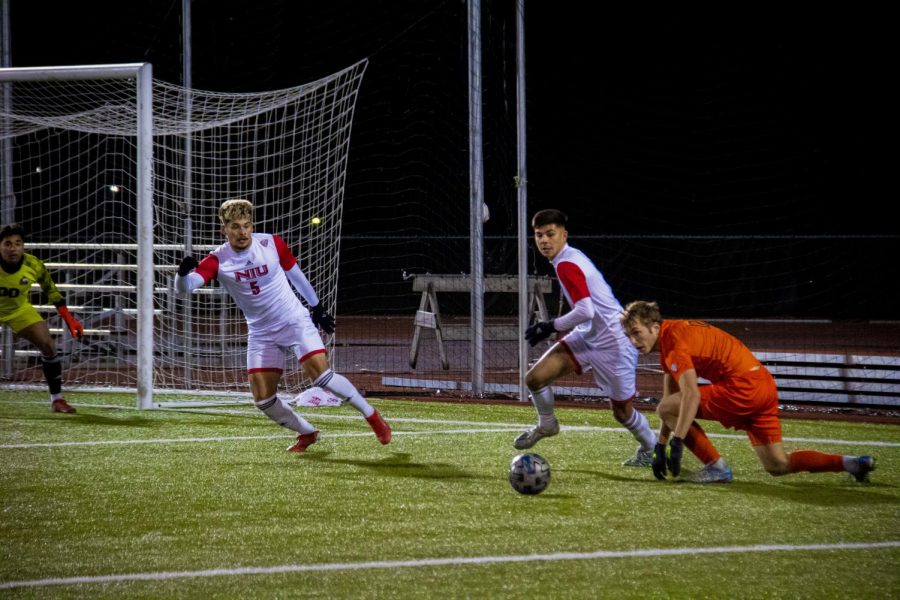 Junior defensemen Adrian Lara (no. 5) tracks down the ball during a defensive stand during NIUs 5-2 victory over Bowling Green in the Mid-American Conference semi-final Thursday. The Huskies advance to Sunday's tournament championship against Georgia State University. (Summer Fitzgerald | Northern Star)

“The focus this week was making sure we were composed on the ball and didn’t get caught just sending the ball along as we have done in the past,” head coach Ryan Swan said. “When we played them last time here, we scored first, and we know they are dangerous from set-pieces, and they’ve managed to capitalize on us and other teams, so for us, it was to keep the ball.”

In the 41st minute, Thomas received the ball on the right side of the 18-yard box. Thomas Maneuvered around defenders and took a shot off his left foot that went bar down, putting the Huskies up 1-0.

“I just knew that they were running toward the right side, so I just took my touch inside and caught them off guard,” Thomas said.

At the end of the first half, the Huskies held 51% of the possession time.

In the first minute of the second half, sophomore defenseman Harry Jolley had to be helped off the field after suffering what appeared to be a leg injury. Jolley’s status is currently under evaluation with more information becoming available Friday.

In the 53rd minute, senior forward Roque Viegas Jr. received the ball after a turnover and made the Falcons pay as he put a beauty into the back right corner of the net to put NIU up 2-0.

In the 57th minute, Thomas found Nick Markanich, who beat his defender in the box and scored to put the Huskies up 3-0.

In the 67th minute, Nick Markanich found senior forward Miguel Maynez Jr., who added on to the lead, making it 5-0.

In the 81st minute, Bowling Green tacked on another goal as Buescher found redshirt senior defenseman Jacob Erlandson, who put the ball in the back of the net to make the score 5-2.

The Huskies outshot the Falcons 10 to nine and had more shots on goal with six to the Falcons three.

The Huskies will face Georgia State at noon on Sunday for the MAC title in DeKalb. The winner will receive an automatic bid into the NCAA tournament.