Huskies get critical win versus Bulls 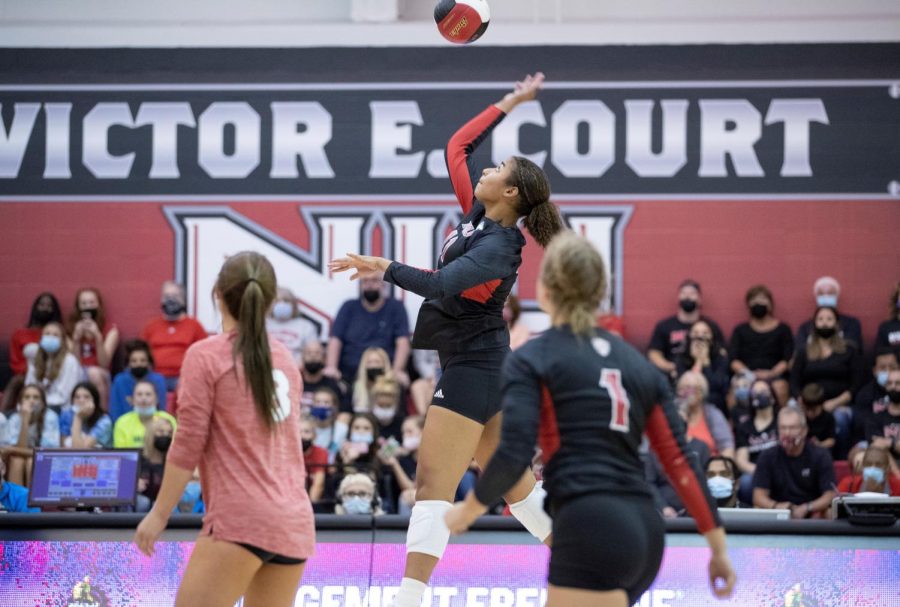 Head coach Ray Gooden spoke of his team being able to pick up a huge win in such a hard fought match.

“It’s awesome we know what’s in front of us right now,” Gooden said. “We continue to handle things our way and it’s been good. All these (Mid-American Conference) matches have been battles, and they’re going to continue to be battles. For us to be able to fight through that and play some tough volleyball at the end is a good sign for our group.”

In the first set, the Huskies got off to a red hot start, taking a 13-5 lead that would cause the Bulls to take a timeout only minutes into the game. The Huskies continued their dominance not letting the Bulls take any ounce of momentum leading 18-9 that led to another Buffalo timeout.

The Bulls battled back to trim the Huskies lead to five before a kill by junior outside hitter Kaitlyn Bell killed all the momentum Buffalo was gaining. NIU won the set with a final score 25-21.

In the second set, the two teams went back and forth and were tied at 9-9 in the early going. Buffalo went on a 4-0 run to create a 12-9 lead for the Bulls. Soon after, the Huskies went on a 4-0 run of their own to tie the score 15-15. The two teams finished with seven lead changes and tied 17 times by the end of the match. Buffalo finally put an end to the set with a final score of 26-24.

The third set started off with another 9-9 score. Buffalo took a slight lead before the Huskies went on a 4-0 run to take a lead 13-11. The Bulls never trailed by more than four, but the Huskies stayed ahead the rest of the way to win the set with a score of 25-22.

Buffalo took momentum away in the fourth set, taking a 11-6 lead that made the Huskies call a timeout. The Bulls continued to increase their lead and did not let up, winning the match by 12 with a score of 25-13.

In the fifth and final set, both teams once again reached a 9-9 tie. The Huskies took momentum to create some breathing room for themselves, taking a 14-10. Freshman middle blocker Charli Atiemo ended the match with a kill to win the set for the Huskies with a score of 15-11.

Junior outside hitter Katie Jablonski and Atiemo each finished with 16 kills, while senior setter Grace Balensiefer added 25 assists to help the team.

The Huskies next game will be at 6 p.m. Saturday at Victor E. Court, facing Buffalo once again.