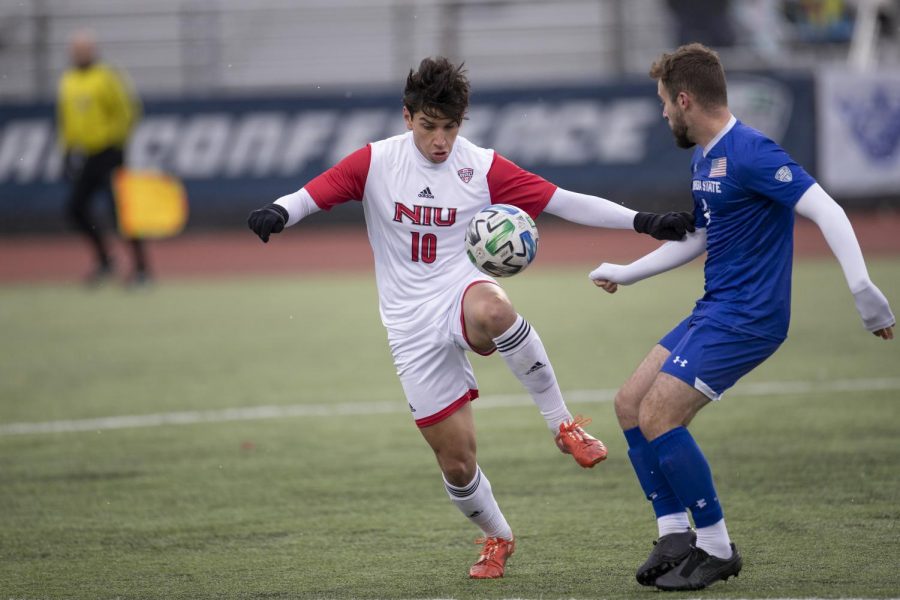 Senior forward Miguel Maynez Jr. takes the ball on the attack against Georiga State University during Sunday's MAC Championship game in DeKalb. Maynez scored the tying goal in the second-half of NIU 2-1 2OT victory against the Panthers.

DeKALB — Double overtime heroics by senior forward Nick Markanich led the NIU men’s soccer team to a 2-1 win over the Georgia State University Panthers to win the Mid-American Conference championship for the first time since 2011.

“It is fantastic,” head coach Ryan Swan said in an NIU Athletics news release. “I thought our guys were fantastic today, and we are delighted to come away with the trophy. The first half was tough against the wind and Georgia State scored a really fantastic goal on the counterattack. We kept probing and had a couple decent looks late in the first half. I thought we were dominant in the second half, and I’m really delighted with the way the guys performed today.”

A first-half rush
The Huskies came into the championship game strong, tallying three shots on goal in the first nine minutes. All of which were saved easily by junior goalkeeper Gunther Rankenburg.

In the 22nd minute on a Panthers odd man rush, freshman midfielder Bryan Silva found junior forward Max Wilkins on a cross, who put the ball in the back of the net to make the score 1-0 Georgia State.

At the end of the first half, NIU held a majority of possession time, with 67% to the Panthers 33%. The Huskies outshot Georgia State five to two in total shots. The Huskies also led in shots on goal with three shots on goal to one for the Panthers.
Second-half heroics by NIU
In the 51st minute, senior forward Andrew Miller-Bell for the Panthers fouled the Huskies to set up an NIU free kick. Senior forward Miguel Maynez Jr. lined up for the kick from 35 yards out and miraculously scored off the kick to even the score at 1-1.

In the 73rd minute, the emotions started to show in a close game as members of the Panthers and Huskies engaged in a bit of a shoving match after a whistle. No cards were shown and the game resumed.

NIU had a chance to break the tie in the 82nd minute when Nick Markanich took a shot from the top of the box, but it was bobbled and saved by the Panthers goalkeeper.

NIU stifled the Panther offense for the majority of the second half, only allowing one shot on goal while taking six shots against the Georgia State defense.

After a long hard-fought second half, nobody was able to capitalize and overtime would be needed.
Sudden-death to decide the championship
In the 97th minute, a clearance by the Panthers defense led to a scoring opportunity for Wilkins, who took a shot from the left side of goal and missed wide right. In the 103rd minute, Nick Markanich took a beautiful shot that hit off the woodwork resulting in a goal kick.

Finally, in the 106th minute, Nick Markanich scored off a corner kick to win the game for the Huskies 2-1.

“We had some really good looks during the game,” Swan said. “Even in overtime, we hit the crossbar, but it felt like we were going to find a way through. Nick is so sharp in the box, when it broke to him, there was a lot of relief, but it was kind of expected as well, because it has happened so often. It was tremendous.”

Markanich’s goal was the 39th of his career as a Huskie and his sixth game-winning goal this season.

“This is awesome!” Nick Markanich said. “This is the greatest feeling ever. I’ve been wanting this all four years and finally it happened my senior year. I really do think we deserve it. We’ll keep it moving on into the NCAA Tournament.”
What’s next for the Huskies
With the victory the Huskies have secured an automatic bid into the NCAA Men’s Soccer tournament, which starts on Thursday. The tournament format and who NIU will face will be announced noon Monday on NCAA.com.