Raiders in need of new leadership

After several off-the-field issues and losing two in a row, owner Mark Davis needs to reevaluate his decision makers 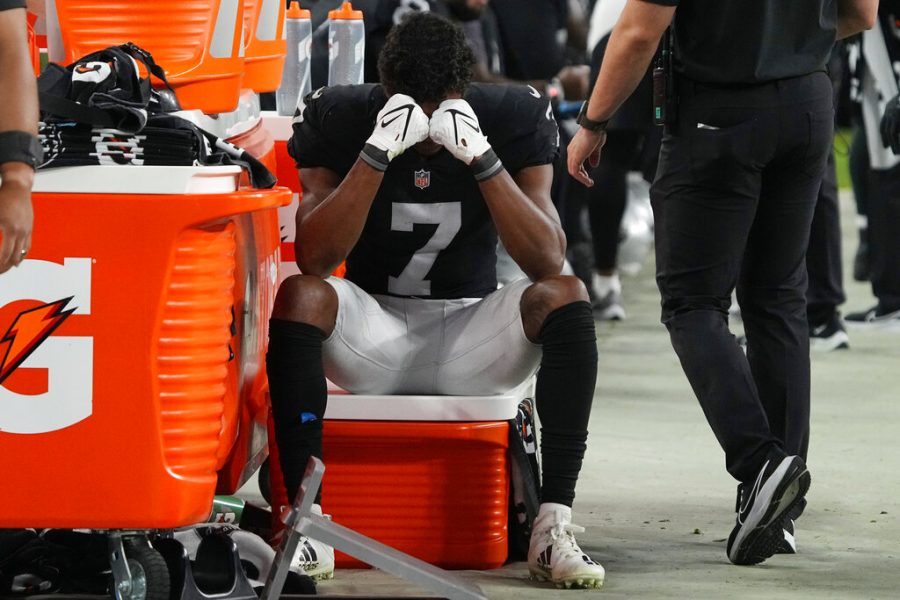 Las Vegas Raiders wide receiver Zay Jones (7) sits on the sidelines with his head in his hands during the second half of an NFL football game against the Kansas City Chiefs, Sunday, Nov. 14, 2021, in Las Vegas.

The Las Vegas Raiders have had numerous issues off the field this season, and things seem to continue spiraling.

The Raiders recently released cornerback Damon Arnette after he posted a viral video with a gun threatening to take someone’s life.

Arnette was the 19th overall pick in the 2020 NFL Draft and has been on injury reserve since Week 4.

Raiders general manager Mike Mayock acknowledged that there was significant concern with Arnette prior to the draft.

“Obviously, we missed,” Mayock told ESPN reporter Paul Gutierrez. “That is 100 percent on me.”

Others are beginning to speculate if the culture of the Raiders organization may potentially be the reason for many of the off-the-field incidents.

Earlier this month, former Raiders wide receiver Henry Ruggs III was involved in a fatal car crash where he ended up killing someone and their dog. Ruggs was released by the Raiders following the incident and is being charged with two counts each of driving under the influence, causing death or substantial harm and reckless driving.

The Raiders selected Ruggs in the first-round of the 2020 NFL draft at 12th overall out of the University of Alabama.

Culture begins to become a question when both the first round picks you invest in are no longer in the league due to off-the-field problems.

The Raiders had five picks in the first three rounds of 2020 and seven picks in total.

With this cast of picks, it is up to the front office to make sure they do what is necessary to get a fair return on their investments and build these young men to be prepared on and off the field.

In that same draft, Lynn Bowden was selected as a converted running back from quarterback. He was traded in the same summer he was drafted before even playing a snap for the Raiders.

Also, safety Tanner Muse was a bust. He didn’t play a single game for the Raiders and spent his rookie season inactive before being released this past summer.

Former Raiders linebacker Khalil Mack was traded for first-round draft picks in 2019 and 2020, a sixth-round pick in 2021, and a third-round pick in 2020 alongside some less significant picks heading to Chicago.

Mack was traded because former Raiders head coach Jon Gruden decided he was not worth paying elite money for. Last month, Gruden resigned as head coach of the Raiders once his racist, misogynistic and homophobic emails were discovered and released to the public.

The Raiders organization will plummet to the ground at this rate if there is not some sort of change within the organization.

The change must begin with the front office. The people leading these men out to battle on the field have not stepped up to the plate and truly been leaders.

Mark Davis has to take time this offseason and look through the front office to find candidates that will not only encourage players to be their best selves on the field but more importantly, off the field.

Leadership is not something to be taken lightly, but when it is, situations like the Raiders’ occur.