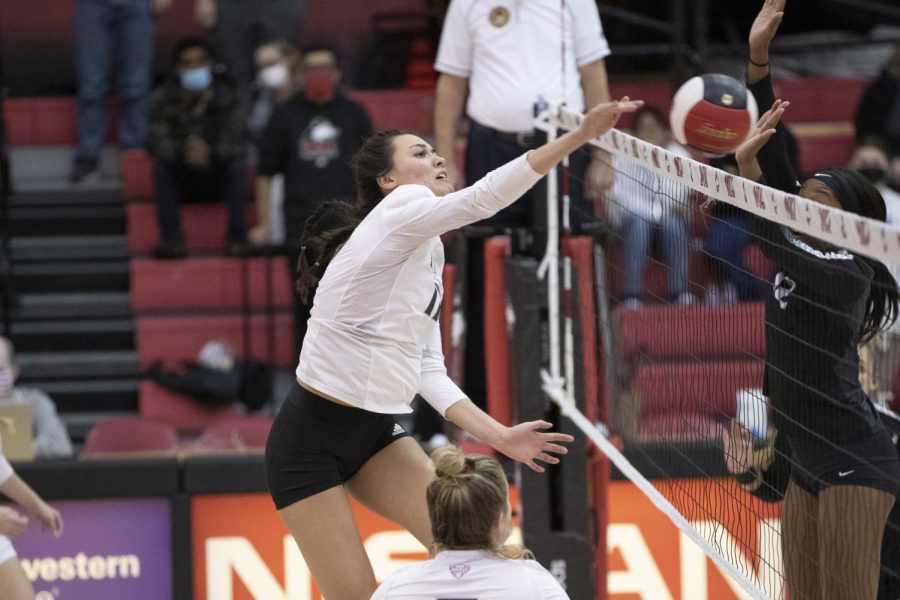 Senior middle blocker Angie Gromos spikes a ball in NIU's win on Nov. 13 against Buffalo. The victory sealed NIU a spot in the MAC tournament.

DeKALB — The NIU volleyball team extended its longest winning streak of the season to five, with a win in four sets on Wednesday in their last home game of the season against the Western Michigan University Broncos.

The Huskies are undefeated in the month of November, going 5-0. NIU was able to avenge an early-season loss against the Broncos by winning the last match of the Mid-American Conference regular season.

“Playing a division match, especially a rival in Western, we know it’s going to be a battle,” head coach Ray Gooden said. “I think both of our teams came in at a high level, and I thought we did a good job winning tough points, our defense was solid and our serve and pass were really good.”

The Huskies saved their best passing of the season for this game, combining for 96 digs as a team for the game. Freshman libero Francesca Bertucci was all over the court covering all tips or power shots that came her way. Bertucci ended the night with a career-high 40 digs.

NIU got some of its best production from the middle blockers. Freshman Charli Atiemo, senior Angie Gromos and senior Jasmine Kemp brought great energy to the court. Atiemo who played produced a team-high 13 kills to go along with four blocks.

“We played them earlier this year, so we wanted to accomplish some things we couldn’t last time around,” Atiemo said. “I know, as a team collectively, we looked at them hard in film and realized what we needed to do.”

Kemp had nine kills and Gromos had eight kills and four blocks. Gooden wanted to see how a rotation of the three middles would do with all three have performed well as of late.

“I think all of them have earned the right to get some reps,” Gooden said. “Angie has come alive the last few days, Charli continues to be steady and Jasmine also had a really good match as well, that’s just our crew of middles and they.”

NIU got out to an early lead that they would hold onto the entirety of the first set. The Huskies got out to a 5-1 lead, with three of the team’s points coming off kills by Kemp and Atiemo. Kills by junior outside hitters Katie Jablonski, Kaitlyn Bell, and sophomore outside hitter Ella Mihacevich gave NIU an 8-3 lead. The Huskies lead would grow to as big as eight before winning the set 25-18.

The second set was very competitive, with five lead changes and ten tied scores throughout the set. The score stood tied at 18-18 when the Broncos broke through with four straight points. The rally was led by Broncos’ junior outside hitter Maggie King, who had three kills on the run. The Broncos would eventually take the set 25-20.

The third set started off close with the Huskies leading 8-7 early on. The Huskies would go on an 8-3 run with kills from four different Huskies, including back-back kills by Atiemo, to give NIU a 15-10 lead at the media timeout.

The teams traded a couple of points out the timeout, but the Broncos would use three straight points to cut the lead to 18-14 forcing a Huskies time out. The Huskies collected themselves and were able to keep their lead at five for the rest of the set until Mihacevich got the set-winning kill to finish it 25-20.

The fourth set was owned by the Huskies with NIU’s lead growing to as high as eight before they closed out the Broncos with an emphatic Gromos kill to secure a 25-20 set and match win.

The Huskies have gotten hot at the right time with the MAC tournament starting this Sunday. Gooden is proud of the way his team closed out the regular season.

“We started off the season playing so much on the road,” Gooden said. “So, for us to close out at home and get to 10 wins in conference with that stretch at the end I think our team did a good job playing together.”

The Huskies will be traveling to Muncie, Indiana for the first round of the 2021 MAC volleyball championship at 6 p.m. Sunday when they take on the University of Ohio Bobcats.