COLUMN: ‘The dip’ a key factor in NIU rebound 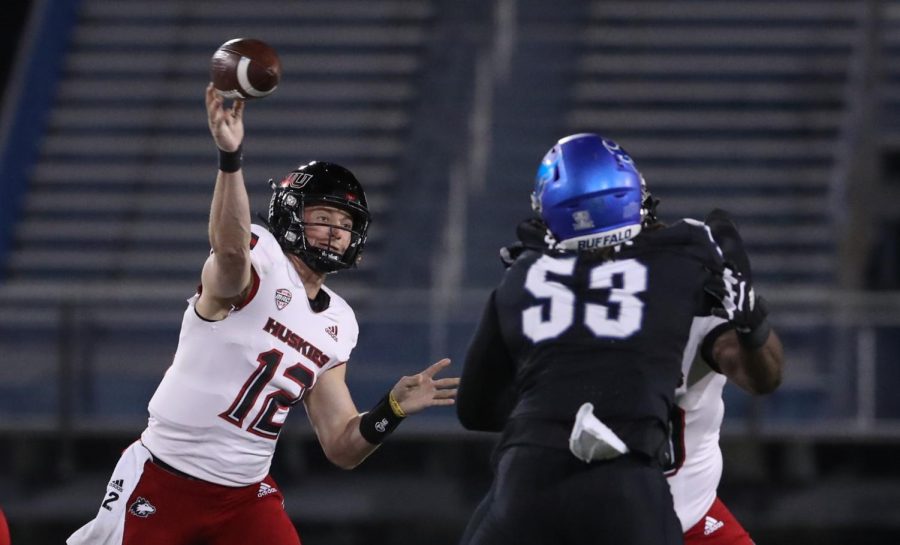 Junior quarterback Rocky Lombardi throws a pass in the first half of NIU's 33-27 overtime victory over Buffalo on Nov. 17.

After answering a question at the post-game press conference Wednesday night following NIU’s win over the University at Buffalo Bulls, junior quarterback Rocky Lombardi shouts across the room to head coach Thomas Hammock.

“You got to buy it,” Hammock said off in the distance.

What is the dip? It’s not literally, at least we’d assume. It’s also not a throw away line like when Drake said he wanted his “chips with the dip” after the Toronto Raptors won the 2019 NBA championship. Hammock said that he needed players to buy into the process he had envisioned when arriving at NIU, even if it meant a turbulent start.

“When I say buy the dip…we were a senior heavy team in 2019,” Hammock said. “We signed a great recruiting class in 2020 and knew we were going to have to play a lot of those players. I said ‘Buy the dip.’ I know the type of evaluation and recruiting we do as a staff and the players we bring into this program. If you stay committed and buy the dip, it’s going to be a rough season but we’ll eventually get to this point.”

While the dip might be metaphorical, Hammock didn’t mince words on the problems he was faced with upon arrival to NIU. Despite being fresh off winning a conference championship in 2018, frustration had been building up in and around the program for years. Hammock had to reshape the program to the standard he was held to as a player.

“When I took over the program in 2019, (NIU) had a championship team but not a championship program in my opinion,” Hammock said. “I don’t think there was a mentality of doing all the things right that it takes to be a college football player. There is a standard and expectation for guys in this program of how you’re supposed to act on and off the field. We held them to that standard.”

The three-year head coach posted a video on Twitter of several pundits in college football treating his team as an afterthought following the win Wednesday. Even the most optimistic of those who cover NIU had the Huskies being a really good team…in two or three seasons. NIU’s rebound has exceeded expectations of basically everyone but themselves.

“It’s not quicker than what I expected,” Hammock said.