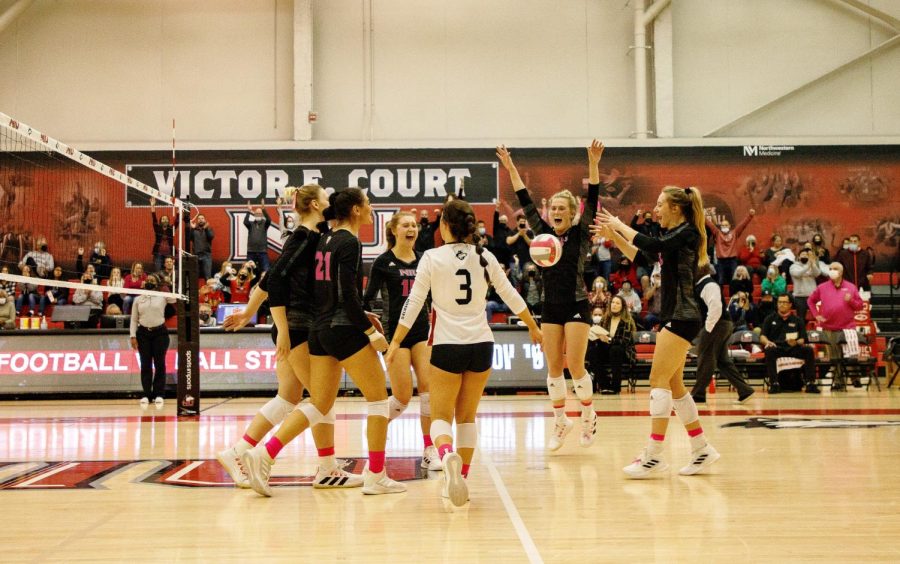 DeKALB — The NIU volleyball team clinched a spot in the Mid-American Conference championship tournament for the first time since 2018, using an impressive second half of the season to reach 10 conference wins and claim the sixth seed.

NIU had a 3-6 conference record halfway through the season after dropping back-to-back games against the Ball State University Cardinals, finding themselves in a similar situation to last season. That mindset and experience the Huskies gained from last season had a huge impact on the team’s play this year.

“Last year, we had a similar record at the middle of the season, and we were like ‘Okay, here’s the turning point’ and we couldn’t get it done,” sophomore setter Ella Mihacevich said. “This year, we came together as a group to nail it down. That mindset really locked us in, so it’s exciting to have some momentum going into the tournament.”

The Huskies closed out the season with a 7-2 record in their last nine games, including a 5-0 record in November. During that span, NIU played against three MAC playoff teams, going a modest 2-2. The Huskies split games with the University of Toledo and beat Western Michigan University in the final game of the season.

The Ohio University Bobcats, the third seed in the tournament, beat the Huskies in straight sets on Oct. 30. The Huskies will have a chance to redeem that loss when they play the Bobcats in the first-round of the MAC tournament Sunday.

“Since we faced Ohio, we might be at an advantage,” Mihacevich said. “They’ve only seen us play three sets and not at our best. So we feel pretty good because we’re a completely different team than when we played them three weeks ago.”

Head coach Ray Gooden knows the last matchup between the two teams won’t have any impact on their upcoming game.

“We hope we are a better team than we were before, but we know (Ohio) is a better team as well,” Gooden said. “We know that they are very physical and confident. We just have to do a good job on our side of the ball.”

The Huskies have a fairly young team with only four seniors on the roster who have experience in the MAC tournament. Yet, all the Huskies players, including the freshmen, are ready for this moment.

“I’m really excited. Coming in as a freshman, I didn’t know if I would start or play,” freshman middle blocker Charli Atiemo said. “So given that opportunity and that chance, it’s gonna be really fun. Just being out there with the seniors is a fun experience. Hopefully, we can send them off with a good hoo-rah.”

The Huskies play 6 p.m. Sunday against Ohio at the hosting Ball State University in Muncie, Indiana.