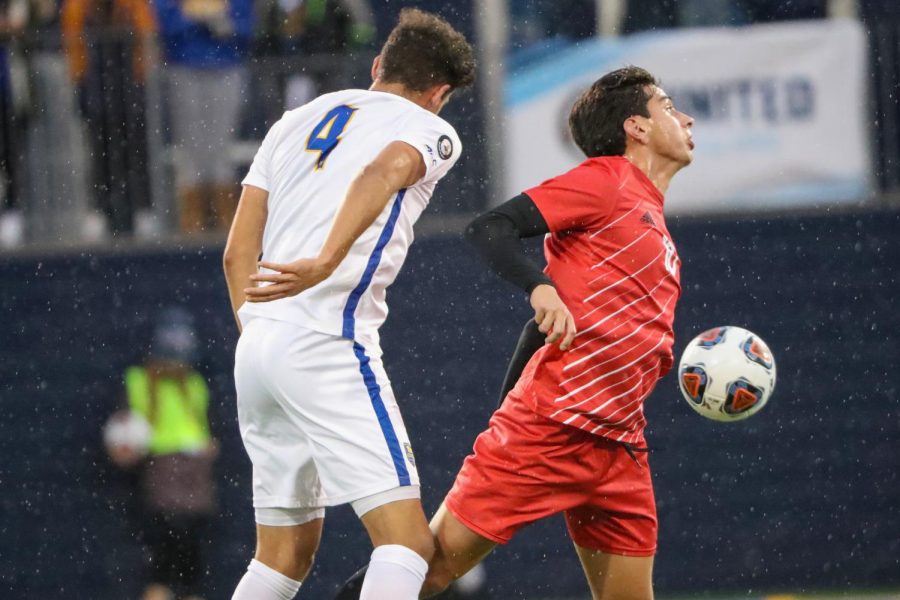 DeKALB — NIU’s season came to an end Sunday as an overwhelming offensive performance by the fifth-seeded University of Pittsburgh Panthers led to a commanding 5-2 win over the Huskies.

“I’m really proud of my team,” NIU head coach Ryan Swan said in a Sunday NIU Athletics news release. “It has been a fantastic season and it was always going to be tough when it came to an end. There is a lot of emotion in our locker room. I’m proud of our guys and everything they have accomplished. We got to see today what the next level looks like and where our goals need to be.”

With the win, the Panthers will move on to the third round of the NCAA Tournament where they will face Hofstra University.

NIU entered the scoring column first in the fifth minute with a goal by senior defenseman Anthony Markanich, assisted by senior forward Roque Viegas Jr., to make the score 1-0.

Less than a minute later, the Panthers responded when sophomore forward Bertin Jacquesson found freshman midfielder Guilherme Feitosa, who evened the score at 1-1 with a goal.

In the 29th minute, sophomore midfielder Filip Mirkovic passed the ball to Jaquesson, who added a goal to his box score to make the score 2-1 Panthers.

With only seconds to go before halftime, the Panthers added one more goal. Freshman forward Luis Sahmkow passed to graduate midfielder Jackson Walti who put the ball in the back of the net to go up 3-1.

Right out of halftime, the Huskies cut the deficit to one as senior forward Miguel Maynez Jr. assisted on a goal by Viegas Jr. to make it 3-2 Panthers.

In the 52nd minute, however, Jacquesson connected with junior midfielder Valentin Noel, who scored to make it a two-score game again.

NIU was almost able to cut the lead back to one in the 58th minute when a shot by senior forward Nick Markanich was saved by graduate goalkeeper Nico Campuzano. The ball deflected back to Markanich, who regathered before the ball was cleared out.

Jacquesson added his third assist of the night in the 74th minute when he passed to graduate forward Alexander Dexter, who scored to make it 5-2 Panthers.

Pitt outshot NIU with 14 shots to the Huskies nine. NIU, however, had more shots on goal with seven to the Panthers’ six.

The Huskies season ended after going 15-3-2, winning the MAC regular season and championship titles, and winning in the first round of the NCAA Tournament.