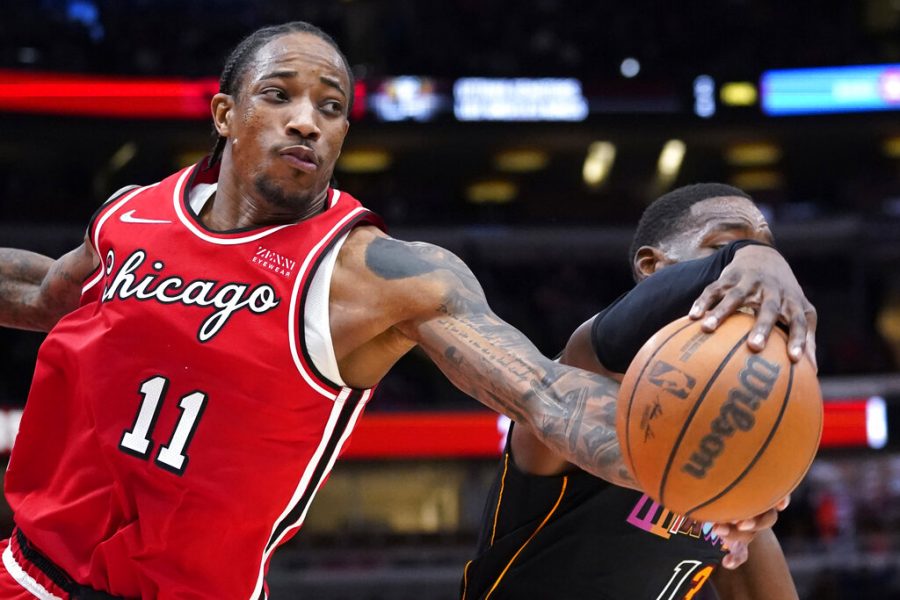 Chicago Bulls forward DeMar DeRozan, left, and Miami Heat center Bam Adebayo reach for a rebound on Saturday, Nov. 27, 2021. Through December, DeRozan is proving to be a valuable pickup for the Bulls.

This season, the Chicago Bulls All-Star combination of forward Demar DeRozan and guard Zach Lavine is the best scoring duo in the NBA.

Initially, people were skeptical about DeRozan coming to the Bulls and playing alongside Lavine. ESPN staff writer Kevin Pelton graded this trade for Derozan and gave it a “D-” and many others have said this may be the worst signing of 2021.

Deeming DeRozan as the worst signing of the offseason seems overdramatic in hindsight. Still, it was very difficult to imagine these two great scorers playing alongside each other without competition for the lead role. Last season, Lavine had a usage rate of 30.5% compared to DeRozan’s 25.5%, making it hard to foresee whose rate of handling the ball would suffer most.

Once the two started playing alongside each other, they quickly developed a strong chemistry. Lavine averages 25.3 points per game, with DeRozan averaging 25.8 points per game.

Only 21 games into the season, Lavine has 532 points, with DeRozan having 542, combining for 1,074 points. This makes them the highest-scoring duo in the NBA, which is tremendous considering many didn’t see the two co-existing.

There are many other scoring duos in the NBA, such as Golden State Warriors guards Stephen Curry and Jordan Poole. Scoring is not a problem for Curry, one of the greatest shooters in the NBA, but Poole has made a huge improvement in his scoring with his great three-point shooting and ability to score in the paint.

The two are a good shooting backcourt that likes to shoot three-pointers frequently, Curry has made 98 three-pointers, with Poole scoring 50, but they aren’t as efficient as the duo of Lavine and DeRozan.

Lavine and DeRozan are masters at shooting the midrange shot. Most of DeRozan’s shots are from midrange, and he shoots efficiently from there at 49%. Lavine can shoot the midrange shot great and shoots the three great as well. So far, Lavine has made 61 three-pointers.

Another notable scoring duo present in the league right now is Brooklyn Nets forward Kevin Durant and guard James Harden. Durant is currently averaging 28.6 points per game and has the best two-point percentage in the NBA at 58%.

He has not been the scorer he used to be due to the new foul change rule the NBA enforced in July 2021. This rule prohibits players from using their off-arm to initiate contact or kicking their leg out when shooting the ball.

Harden is the poster child of changed rules, having led the NBA in free throw attempts for years by frequently shooting for contact. Now that this rule has been implemented, it is hard for him to score points on the board because the free throw shooting played a role in him scoring points.

This year, Durant and Harden could have been the best scoring duo if not for Harden’s shooting slump and his inability to get to the line as much as he used to.

Lavine and DeRozan have taken over the league with their scoring and have displayed a remarkable ability to take over the fourth quarter. In fourth-quarter play, DeRozan leads in scoring with 141 points, and Lavine sits in second place with 130 points.