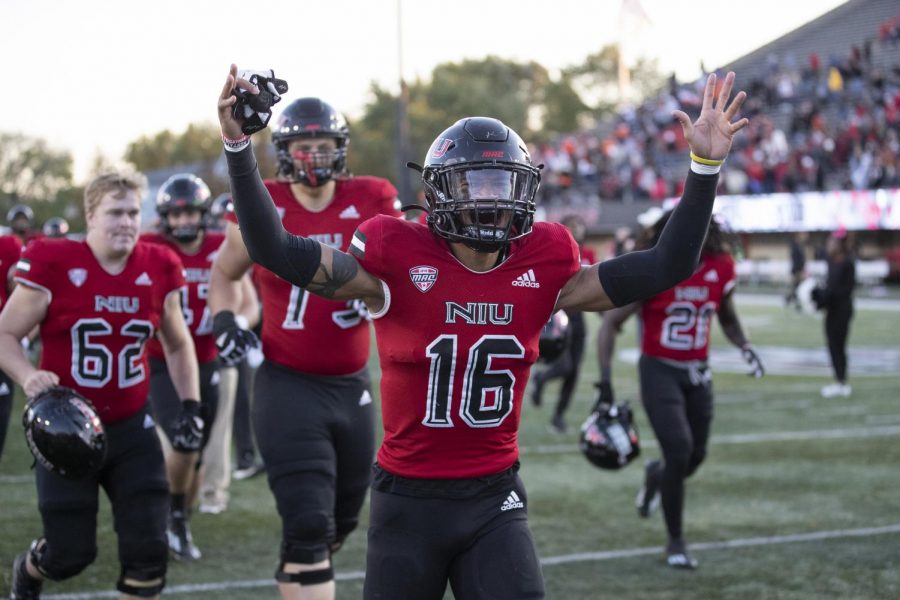 DeKALB — After going from worst to first in their division, the Huskies compete Saturday for the Mid-American Conference Championship against the Kent State University Golden Flashes at Ford Field in Detroit.

NIU, entering with an 8-4 record, is now a week removed from their 42-21 loss to the Western Michigan University Broncos in the regular season finale. The Huskies played without junior quarterback Rocky Lombardi and redshirt junior wide receiver Cole Tucker, both sidelined with injuries.

Besides the wear and tear, head coach Thomas Hammock said the Huskies’ energy hasn’t been as high since their last-second victory over Ball State University on Nov. 10. Hammock added that the 10-day layoff will give a chance to recover and rediscover that lost energy.

“I think we’re fully recovered, healthy and fresh,” Hammock said. “I saw a change in their energy (after the Ball State win) and energy is everything in college football. We were running on fumes the last couple of weeks, but how they’ve come out so far has me very excited for this opportunity.”

To secure the MAC Championship only a year after an 0-6 season, the Huskies will need to win a rematch of their 52-47 loss to Kent State on Nov. 3.

“Being so close that last game and allowing them to get away, it taught us a lot,” redshirt junior linebacker Dillon Thomas said. “Our coaches have a great game plan that’s going to allow us to fly around, especially the defense, and get a better feel for their offense to find ways to stop them.”

To better prepare this time around, Hammock said his staff tried to find a way to fully engage the entire defense.

“Everybody is available on every play,” Hammock said. “To simulate that, what we’ve done is try to add more footballs on the field to be honest. (Crum) does a great job with their design. It can be a run or a pass, but we want to make sure everyone is engaged on every play…I think it’s helped enhance our practice.”

While the opposing offense is familiar to NIU, Hammock said NIU will feel out a Golden Flashes defense after Kent State fired defensive coordinator Tom Kaufman on Nov. 12.

“Anytime you choose to change coordinators, they’re going to have their own things they like to put in on defense,” Hammock said. “We’ll get in Saturday, see how they want to play us and we’ll have to adjust. Whatever they want to present, we need to be able to adapt and adjust.”

Under interim defensive coordinator C.J. Cox, Kent State shutout the University of Akron before edging out Miami University 48-47 on Saturday to secure the MAC East.

Kickoff is scheduled for 11 a.m. CT on Saturday at Ford Field in Detroit. The broadcast will be on ESPN.