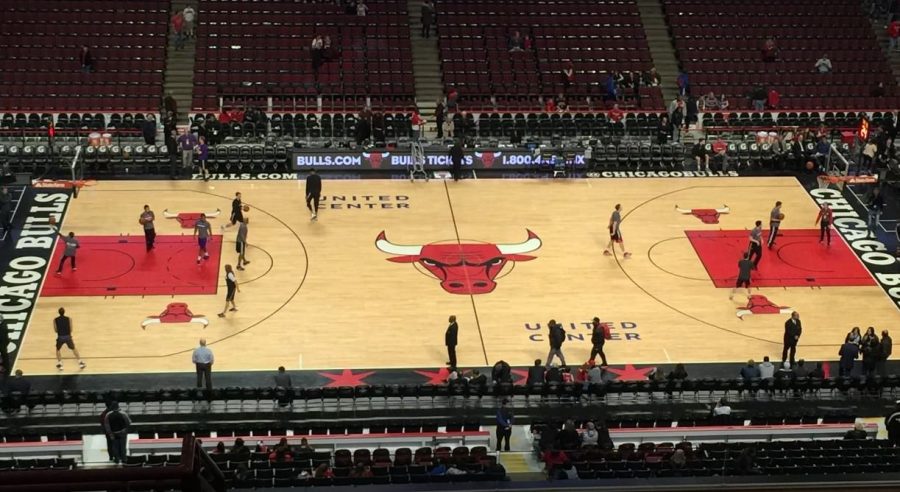 The scene pre-game on the United Center court.

Scottie Pippen, a six-time NBA champion and Hall of Famer, released his memoir “Unguarded” on Nov. 9, addressing the Bulls Dynasty in the ‘90s and his journey to the NBA after ESPN dropped a documentary series called “The Last Dance” in 2020 that massively featured Michael Jordan.

In the documentary, Jordan’s teammates such as Pippen, Steve Kerr, Dennis Rodman, Horace Grant and coach Phil Jackson talked about their run in the ‘90s, but Pippen had an issue after watching “The Last Dance.”

In a Nov. 8 interview with Good Morning America, Pippen said he thought the documentary was great, but the story glorified Jordan as a player and not the Bulls as a team. Pippen was the only teammate who had a problem with the documentary, which goes to show that the only problem was him.

Pippen called Jordan selfish in his first chapter, saying he was all about individual achievements.

“He was a great scorer, but a lot of things that he did was based on him as an individual,” Pippen said. “I think basketball is a team game.”

For 13 seasons, Jordan was the primary scorer on the Bulls. Of course, he will be glorified and receive individual achievements because he is the star of the team.

Pippen said, “The Last Dance” was for Jordan to tell his story, so Pippen wrote a book to tell his own story.

He wrote in his book how it was always about the team first. He wants the media to know that basketball is not an individual sport and that the greatness of Jordan glorifies them.

“You can glorify Muhammad Ali and Serena Williams because they play individual sports, but you can’t glorify somebody on a sports team,” Pippen said.

Jordan’s greatness was glorified because he is the greatest scorer ever to touch a basketball. Jordan’s career average was 30.1 points per game and is currently fifth on the all-time scoring leaders list with 32,292 points in only 15 seasons.

Pippen goes on to say that Jordan glorified himself the whole documentary, and the press fuels it by saying Jordan carried the Bulls in the ‘90s. The main purpose of this documentary was to talk about the career of Jordan and the Bulls Dynasty, so Pippen’s comment is foolish and sounds like jealousy.

He referred back to his book, saying how in the ‘80s on the playgrounds, you’d have everyone moving the ball around passing it to help the team, but that stopped in the ‘90s because kids wanted to be like Jordan. He says how Jordan didn’t want to pass, rebound, or defend the best.

Pippen’s statement is false. Jordan was a great rebounder and a phenomenal defender. He won the Defensive Player of the Year award in 1988 while averaging 35 points per game and 5.5 rebounds per game.

Pippen goes on to say he believes Jordan is not the greatest player of all time and that LeBron James is.

“That’s why I always believed LeBron James is the greatest player,” Pippen said. “He does everything.”

James is a great all-around player, but he comes second in the debate because Jordan was on another level with his scoring abilities and his championship success.

Pippen portrays Jordan as a selfish person because he believes Jordan was all about individual success and chasing fame. Jordan did not have to chase fame because it came naturally with his skills on the basketball court. Jordan deserved the fame because he won six championships with six Finals MVP awards to show for it and had multiple endorsement deals throughout his 15 seasons in the NBA.

In “The Last Dance,” Jordan mentioned how Pippen was the best teammate he ever played with and that he could not win those titles without his help. It seems like Pippen does not feel the same way about Jordan.