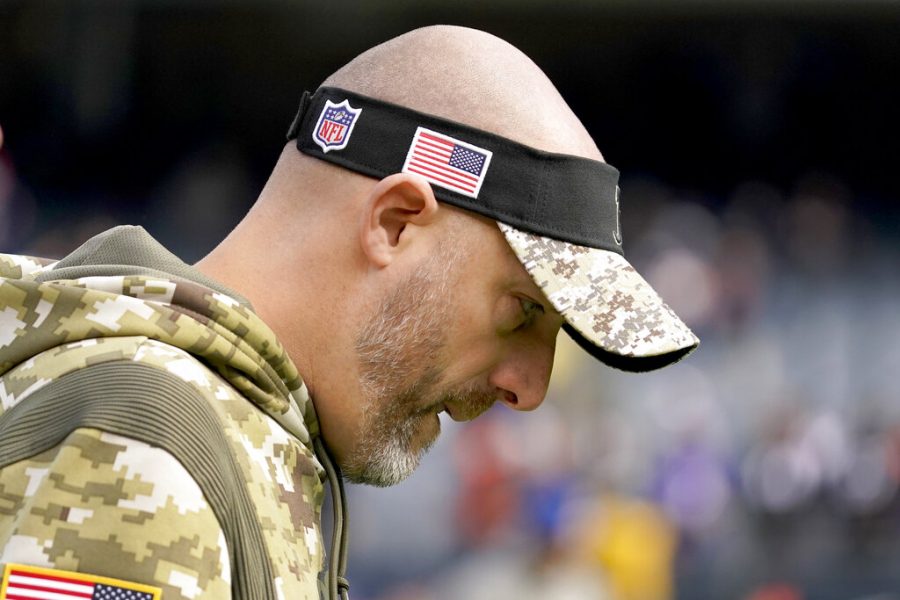 Chicago Bears head coach Matt Nagy walks onto the field before an NFL football game against the Baltimore Ravens Sunday, Nov. 21, 2021, in Chicago.

The Chicago Bears have been one of the most underwhelming teams over the past couple of seasons.

A lot of the Bears’ struggles stemmed from head coach Matt Nagy. Hired back in 2018 after the team parted ways with John Fox, Nagy was meant to be an offensive mind to help the Bears.

Over three seasons in Chicago, Fox had a 14-34 record, the second lowest winning percentage in team history. That being said, the Nagy era has been anything but an improvement. In fact, the Nagy era has been an even bigger disappointment. Nagy was one of the most sought out coordinators looking for a head coaching job because of the work he did as the Kansas City Chiefs’ offensive coordinator. With Nagy calling plays for the Chiefs in 2017, the team improved from 20th to 6th in the league. That’s the coaching the Bears thought they would get with Nagy, not the inconsistent play calling they’ve received thus far.

Although Nagy holds a steady record of 32-27 as head coach, the talent on the roster that Nagy has had over his tenure is a step above anything Fox had.

The Bears defense was already one of the best in the NFL, ranking ninth in total defense in 2017. The team then made some huge offseason acquisitions for the 2018 season, signing free agent wide receivers Allen Robinson and Taylor Gabriel, as well as tight end Trey Burton.

On the defensive side, they added cornerback Prince Amukamara, a seasoned veteran in free agency and linebacker Roquan Smith in the draft, but the biggest move came just a week before the start of the 2018 season, making a move for All-Pro linebacker Khalil Mack. In making the deal, the Bears all but sold their rights away to impactful players in the upcoming NFL Drafts.

With quarterback Mitchell Trubisky in his second season, the Bears were primed to take off with the right coaching staff.

That’s why the hiring of Nagy has been so deflating for Bears fans to watch. The team was set up for success, it just needed the right offensive mind to develop a quarterback.

Take Los Angeles Rams head coach Sean McVay, who, like Nagy, was hired to develop the Rams second-year quarterback Jared Goff. Goff put up some of the best stat lines with McVay’s coaching, reaching as high as 4,688 passing yards and 32 touchdowns in 2019. Nagy’s coaching and schemes failed to do the same for Trubisky or the Bears.

In his first season, things seemed to be going well. The Bears went 12-4 on the season and clinched a playoff spot for the first time since 2010. Trubisky had 3,223 passing yards with 24 touchdowns, but with a deeper look you could tell things were not as good as they seemed.

The Bears were still in the bottom third of the league in yards per game, going from 30th to 21st. It was clear the team was carried by their defense, which ranked first ranked first in points against, forced turnovers, interceptions and touchdowns allowed.

Things only got worse for the Bears offense in the playoffs that year. The Bears failed to score more than one touchdown in their 16-15 loss in the divisional round to the Philadelphia Eagles.

Chicago followed up that promising season with one of the most disappointing ones in recent memory. Finishing 8-8 in 2019, with the offense dropping back down to 29th in the league in yards, while Trubisky regressed throwing 3,138 yards and only 17 touchdowns.

Nagy and the Bears used the 2019 offseason to find a replacement for Trubiksy believing he was the one holding the team back. Nagy chose QB Nick Foles to come run his offense, believing the veteran would be better suited to run the team then Trubisky.

Foles didn’t do any better under Nagy, throwing for just 1,852 yards in nine games played before Nagy went back to Trubisky. The worst part of the whole situation is that Trubisky winning three out four games to end the season helped save Nagy’s job as the fourth-year quarterback led the Bears to the seventh seed. Still, Trubisky was gone at the end of the season.

Nagy has coached five different quarterbacks over the span of five years, none of which have looked better with his coaching. By failing to develop a quarterback or offense that could take pressure off the defense, Nagy has passed up his and the Bears opportunity for success anytime soon.