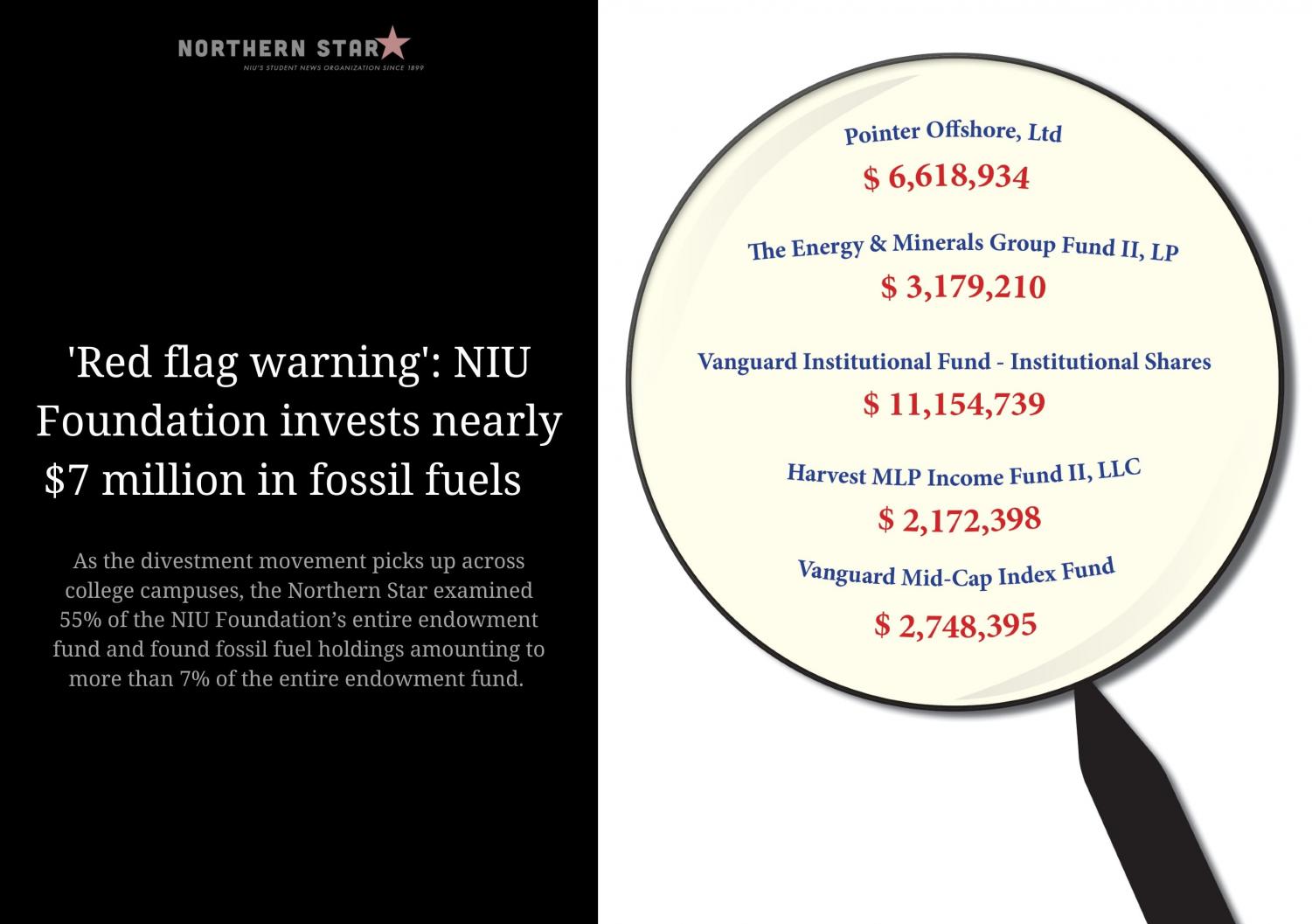 The Northern Star was able to report on the NIU Foundation’s endowment fund through documents obtained through the Freedom of Information Act. The Northern Star, along with the Institute for Energy Economics and Financial Analysis, was able to determine the amount of each fund’s holdings in fossil fuels by reviewing a fund’s publicly available fact sheet.

DeKALB – Within the NIU Foundation’s top 16 investments – worth $2 million or more – in its $95.6 million endowment fund, an estimated 13% is invested in fossil fuel stocks.

The Foundation has an endowment fund of $95.6 million with nearly 50 different funds the Foundation invests in, according to documents obtained by the Northern Star through the Freedom of Information Act. Private foundations must pay out 5% of their assets annually while the rest is invested.

The Department of Energy defines fossil energy sources, including oil, coal and natural gas, as non-renewable resources that formed when prehistoric plants and animals died and were gradually buried by layers of rock.

Most of the NIU Foundation’s investments are in private equity rather than in specific companies. It’s difficult to learn exactly what university foundations invest in their endowments because it’s not accessible information located online. Every year, nonprofits and foundations file 990 tax forms that are open to the public, though they don’t require a detailed list of each private equity investment.

The two funds the NIU Foundation invests in with the most fossil fuel-related investments are the Energy & Minerals Group and Harvest Fund Advisors.

Harvest Fund Advisors is also a private equity firm based in Philadelphia, Pennsylvania, and invests in U.S. midstream energy assets. The NIU Foundation invests nearly $2.2 million in the Harvest Fund and has an estimated amount of $1.9 million invested in fossil fuels.

Vanguard Institutional Fund is the largest fund the Foundation invests in, with $11.2 million. The fund has an estimated amount of $335,757 invested in fossil fuels.

“The Vanguard institutional fund is an index fund,” said John Seitz, a former Wall Street portfolio manager who runs FoundationMark. “It’s a passive index fund that just always all the same stocks as the S&P 500. So if you own that fund, you’ll have that company like Exxon Mobil or energy peak stocks, which are oil and gas exploration and production during the S&P, so you own them, but it’s a passive investment and a passive investment vehicle just choosing to get exposure to us.”

Jack Tierney, treasurer of the NIU Foundation, said the Foundation doesn’t have a stance on whether or not they should invest in funds that are tied to fossil fuels.

“Our number one goal at the Foundation is to produce a rate of return every year,” Tierney said. “That allows the Foundation to do the things they do: payout scholarship money and endowed professorships and building funds. So we really try to stay out of the political arena, if you will, when we’re managing the endowment fund.”

Tierney said index funds serve a good purpose for endowment portfolios because they have low fees and perform as the market does.

“We have not pursued the idea of disinvesting from the index funds because a portion of their holdings are in energy,” Tierney said.

Tom Sanzillo, director of finance for the Institute for Energy Economics and Financial Analysis, and Dan Cohn, a Global Energy Transition Researcher at the institute, said the NIU Foundation’s endowment fund is sufficient to call it a “red flag warning.” Meaning “there is a level of risk that requires further review and examination with a very high likelihood that corrective actions will be required.”

The divestment movement among college campuses took off nearly a decade ago with schools like Loyola University Chicago, Southern Illinois University, University of Illinois Urbana-Champaign, Harvard University and more. An October study shows that more than 1,485 institutions with assets over $39.2 trillion have committed to divest from fossil fuels or more than the combined annual gross domestic product of the United States and China.

“It is increasingly difficult for major institutions to make the argument that ongoing fossil fuel investment is wise,” the report reads.

Fossil fuels used to make a lot of money. They don’t anymore, but most people don’t recognize that.”

Sanzillo and Cohn said that if the NIU Foundation made a divestment from fossil fuels, it would make an impact.

“NIU’s divestment would put the school in the company of hundreds of forward-thinking universities and colleges around the world,” Sanzillo said. “Divestment from fossil fuels began with small non-profits and universities.”

Critics of the divestment movement argue that divesting could hurt investment returns and hinder foundations from maintaining their endowment size. A 2014 study from Divest Invest found that 94% of survey respondents who committed to divest reported that their financial performance has been neutrally or positively affected as a result.

“Fossil fuels used to make a lot of money,” Sanzillo said. “They don’t anymore, but most people don’t recognize that.”