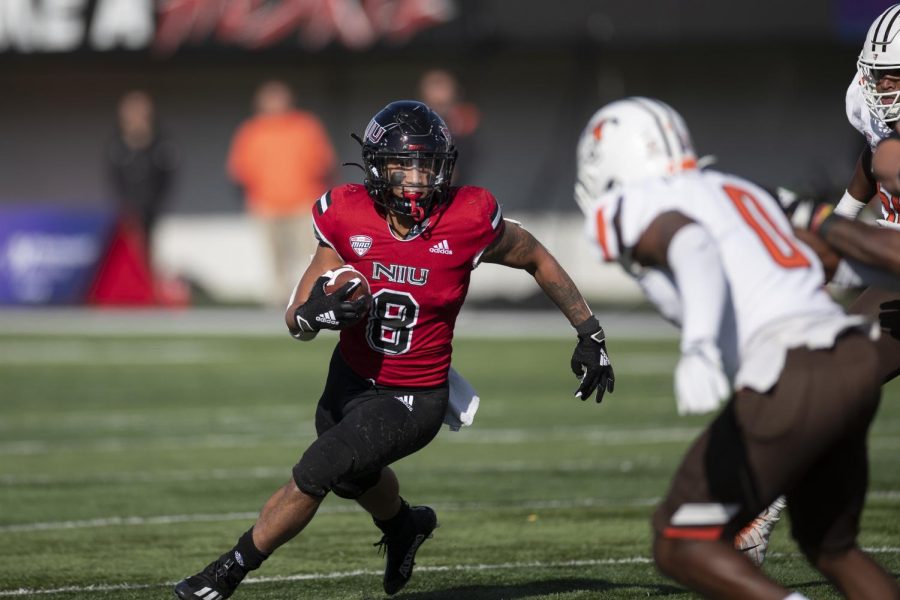 Freshman running back Jay Ducker carries the ball during the first half of NIUs 34-26 victory against the Bowling Green Falcons, Saturday in Dekalb.

Hammock was named MAC Coach of the Year after improving the Huskies record from 0-6 last season to 8-4 this year. Hammock led NIU to their eight MAC West title in 12 seasons and his first since taking command of the program in 2019.

Ducker was named MAC Freshman of the Year for his rushing efforts in 2021. Replacing redshirt freshman running back Harrison Waylee midway through the season, Ducker rushed for 892 yards and three touchdowns.

The breakout performance for the Bellevue, Neb. native was against Bowling Green State University on Oct. 16.

Another freshman, safety CJ Brown, was named to the All-MAC First Team after leading the Huskies with 94 tackles.

The Huskies look to complete a transformational season at 11 a.m. CT Saturday at Ford Field in Detroit when they face the Kent State University Golden Flashes for the MAC Championship on ESPN.