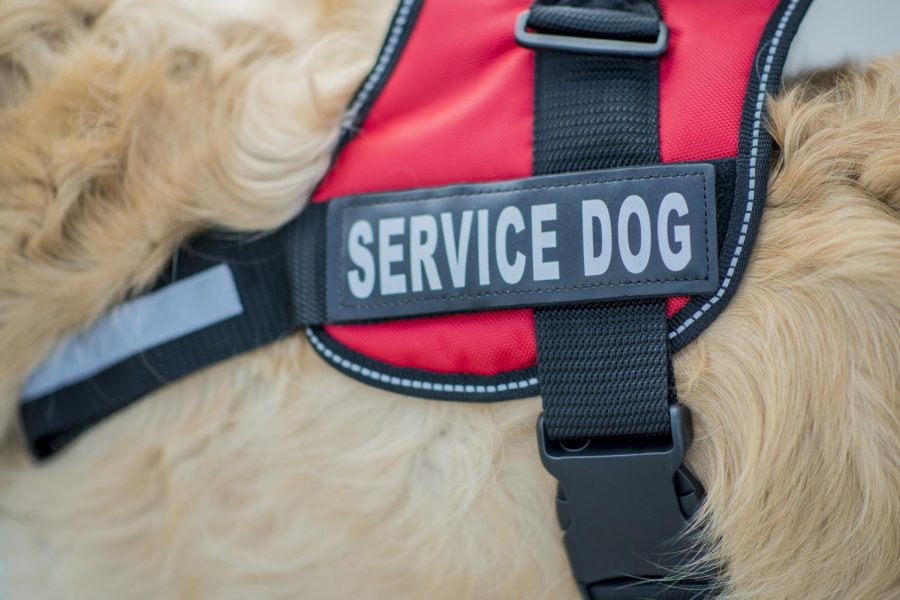 A purebred golden retriever dog wears a service dog harness, showing that it is a support animal with a job helping people in need.

Editors note: This story was updated at 6 p.m. Dec. 4 to change “service pet” to “service animal” and to distinguish the difference between an emotional support animal and a service animal.

Emotional support animals can help people with certain mental health conditions such as anxiety and depression. Having emotional support dogs specifically provides a sense of comfort for panic attacks and can even get medication for their owners, according to Healthline.

Owning a pet, in general, has its perks. Michelle Groeper, executive director of Tails Humane Society, said that animals make great companionship with their owners.

“Pets are a very good way to relieve stress,” Groeper said. “They’re always there for you, they don’t ask for anything. Pets are a great source of comfort, they don’t judge.”

There are emotional support animals, service animals and therapy animals, and they’re all different, said Shelley Pier, co-owner and therapist at Inner Path Counseling and Wellness at Westmont.

“Therapy animals are my own personal animals that have been trained and have been certified through an accreditation process to be therapeutic animals used in session with my clients,” Pier said. “The easiest example would be seeing dogs that go to a school and kids read to them or dogs and animals that go into hospitals.”

Service animals are typically owned by the client and receive an extensive amount of training compared to therapy animals. These animals are specifically for people with a disability including a physical, sensory, psychiatric, intellectual or other mental disability.

There are numerous roles for a service animal. They attend to needs such as fetching medication and water for anxiety attacks, performing safety checks around a room for their owner’s well being and others listed on MedicalNews. There are also financial benefits for having a service animal as well, such as the decrease in outside assistance and saving money by not hiring paid assistance.

Though having service animals doesn’t eliminate one’s disability completely, they do help make daily life much easier. The effects that animals have on people, in general, maintain the pre-made bond between the animal and the owner.