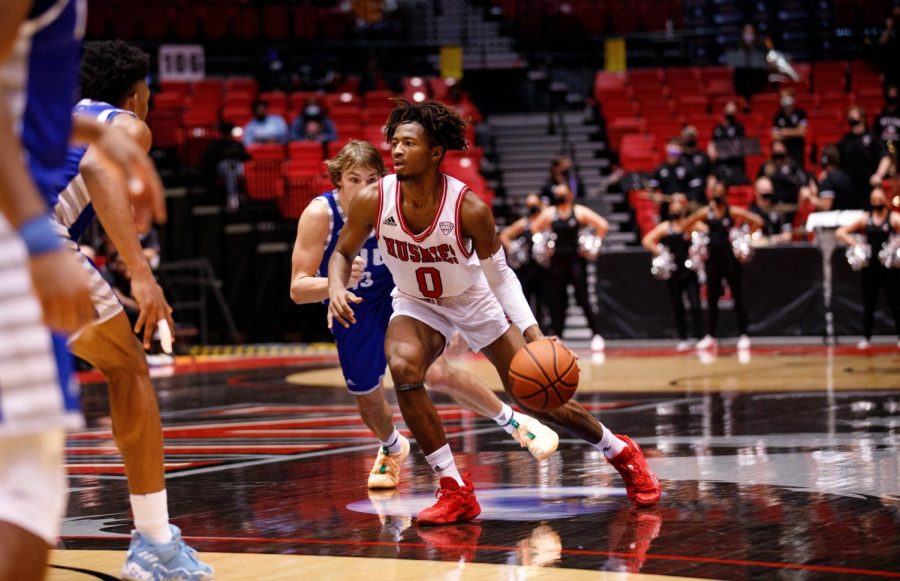 Sophomore guard Keshawn Williams drives against the Eastern Illinois defense during their game on Dec. 2. Williams scored a career-high 24 points.

Sophomore guard Keshawn Williams surpassed his career-high in points scored in a game, posting 24 points. Williams’ previous career-best performance came against the University of Indiana Hoosiers on Nov. 12, where he recorded 21 points.

“My first instinct is to score, but that’s not what I wanna do in games like that,” Williams said. “I had a lot of family out here tonight, so I had to go out there and play as hard as I can.”

The Huskies also secured their first win since their upset victory over the University of Washington Huskies in Seattle on Nov. 9.

“It feels good,” senior guard Trendon Hankerson said. “We always try to talk about how one win can carry us over to a streak. Tonight was really just a huge win at home.”

EIU opened up the scoring Wednesday night with a three-point jumper by fifth-year guard Keshawn Charles in the second minute of the game.

The Huskies took control of the game in the sixth minute after Williams scored for the third time off a layup.

The two squads would remain three points of each other until the ninth minute. NIU broke away with a three-pointer by Hankerson with 10:21 remaining in the first half to give the Huskies an 18-12 advantage.

NIU entered halftime with a 29-23 lead after closing out the first-half scoring with four-point run. The Huskies held a lead for 15:40 against EIU’s 47 seconds of game time with the advantage.

Williams and Hankerson headed the Huskies’ offensive efforts in the opening half with Williams leading NIU with 13 points, going 6-for-10 from the field and making his only free throw.

Hankerson was not far behind after posting 12 points of his own. The Huskie veteran made 4-of-6 three-point shots, having exclusively made attempts from behind the three-point land.

The Panthers began the second half aggressively as they made a three-pointer and a layup in the first 1:01 to reduce their deficit to one point at 29-28. NIU would soon respond with two free throws by junior guard Kaleb Thornton and two layups by senior center Adong Makuoi to extend their lead to 35-28.

The Huskies made a final run beginning in the 11th minute with a dunk by Williams. A combination of scores by Williams, Hankerson, and senior forward Chinedu Kingsley Okanu brought the score to 53-36.

“We didn’t do what we wanted to do on the offensive end in regards to execution,” Burno said. “We gotta do a better job of having more ball movement.”

The Huskies will prepare to head to Dayton, Ohio, to challenge the 5-3 University of Dayton Flyers. Dayton will enter Saturday afternoon’s matchup on a four-win streak, including an upset victory over the #4-ranked University of Kansas Jayhawks Friday.

“(Dayton) will be a tremendous challenge, but we also came off of playing in front of 17,000 in Bloomington at Indiana,” Burno said.” The schedule has prepared us to play Dayton. Now we just got to go out and execute the game plan.”

Game time in Dayton is set for 1 p.m. CT  Saturday in UD Arena in Dayton. The game will be broadcast on Bally Sports Ohio and ESPN+.