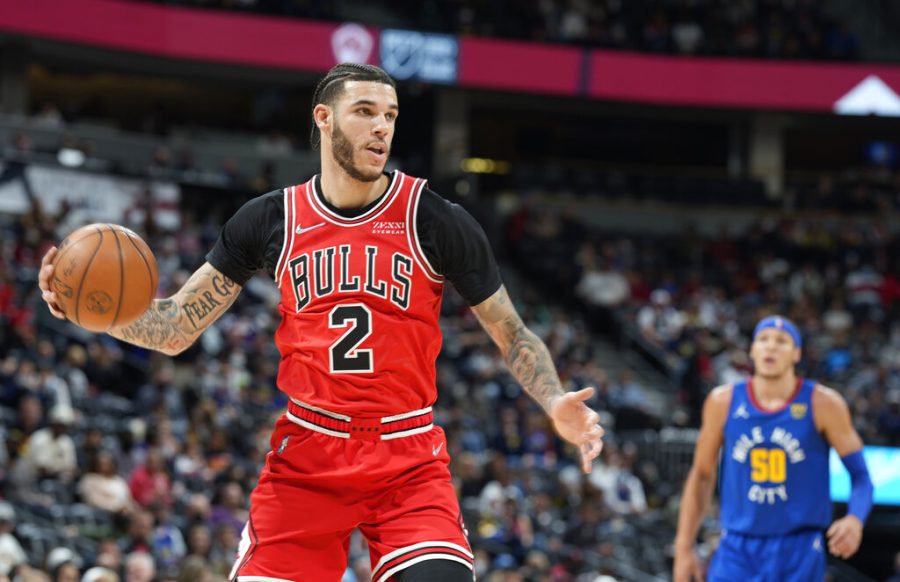 Chicago Bulls guard Lonzo Ball, front, pulls in a rebound as Denver Nuggets forward Aaron Gordon defends in the first half of an NBA basketball game Friday, Nov. 19, 2021, in Denver.

Lebron ends November with a suspension and COVID-19
The face of the NBA and Los Angeles Lakers forward Lebron James has had a tough week and a half, to say the least. The Lakers superstar was involved in an altercation with Detroit Pistons forward Isaiah Stewart during a game on Nov. 21. The incident was caused by James hitting Stewart in the face during a box out, resulting in the Pistons forward charging at James. James and Stewart were both ejected and suspended for their actions. James returned for three games before eventually testing positive for Covid-19 on Tuesday. James, who is vaccinated, will be in the Health and Safety Protocols for the next 10 days or until he produces two negative tests in a row.
The Phoenix Suns deserve their respect as the top team in the West
Is it possible for a team coming off an NBA Finals loss to be underrated during the season? The answer is yes, and the team is the Phoenix Suns. The Suns came off an incredible finals run last year led by guards Chris Paul and Devin Booker; however, after a slow 1-3 start to the season, it seems a lot of people brushed them off as a serious contender. All the talk has been about guard Stephen Curry and the Golden State Warriors as the top team in the Western Conference. Curry and the Warriors are having fantastic seasons, but the real talk of the West has to be the Suns.

Since their slow start, the Suns have won a Franchise tying 17 straight games this season. The Suns (18-3) currently have the best record in the NBA and are coming off their best defensive game of the season against the Warriors, when they held Curry to a career-low 19% on his field goals when attempting at least 20 shots, according to statmuse.com. The Suns won the game 104-96, all while Booker sat on the sideline with a pulled hamstring.
Chicago Bulls and Miami Heat punished for tampering
The Chicago Bulls and Miami Heat will be stripped of their 2022 second-round draft picks, the NBA announced Wednesday night. The decision came after a four-month investigation into tampering allegations about the teams’ acquisition of free agent point guards Lonzo Ball and Kyle Lowry, respectively. The Bulls signed Ball to a four-year, $85 million contract this past summer, but the team had shown heavy interest in him since last season, trying to acquire him at last year’s trade deadline from the New Orleans Pelicans.

The same scenario happened with the Heat and Lowry; with the Toronto Raptors tanking last year, the Heat made a huge push to try and trade for him back in February. But the Raptors asking price was too high, forcing the Heat to wait to sign Lowry in free agency. The NBA essentially gave both teams a slap on the wrist for their part in the tampering dilemma –  which almost every team in the NBA does –  it just so happens the Bulls and Heat were caught.