John Vinson’s pitch to be next police chief: ‘What do you need from us?’ 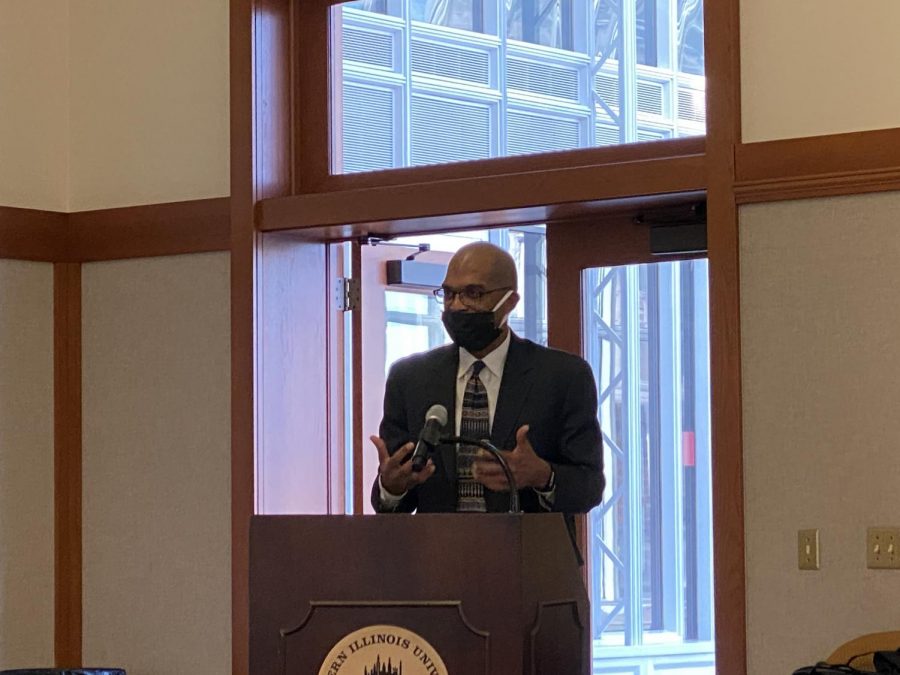 John Vinson spoke about his goals for the NIU Police Department if selected as the next chief of police Thursday during an open forum. (Wes Sanderson | Northern Star)

DeKALB — John Vinson, current director of strategic planning and accreditation at Indiana University, discussed in a Thursday forum a plan toward community policing not based on his wants but focused on the wants of the community.

Vinson discussed a vision for the NIU Police Department that didn’t just focus on safety from a sense of policing but also in pushing the department toward a more holistic approach of public safety on campus.

“That is my goal, and everything that I do, working with you, faculty, staff, student and community members in a holistic way focusing on the entire picture of public safety to include wellness in such a manner that we are working together to ensure that this campus is one of the safest campuses in the country,” Vinson said.

Vinson spoke to members of the NIU community as part of the university’s search process to find a permanent NIU Chief of Police that has been filled on an interim basis since April when former NIU Police Chief Tom Phillips retired from the department.
Addressing campus safety through communication
Vinson focused on the importance of campus safety through a model of communication with stakeholders, including students, faculty and administration, to address the needs those stakeholders view as important.

“Oftentimes we as police, we go in and want to tell the students what we think they need,” Vinson said. “One of the things I found when you talk about student safety is having a dialogue and asking the students, what do you need from (the police)?”

Vinson said that he’s found creating an extensive dialogue with students in multiple forums helps best identify students’ needs but believes that reaching students comes from a shared understanding of the experience.

“It’s really about, in my mind, being very thoughtful,” Vinson said. “Then making sure the students understand that collectively campus safety is a shared experience.”

As NIU continues with its plan to dismantle the emergency Blue Light phones around campus within the next two semesters, NIU looks to increase downloads of its NIU SAFE app to keep students safe. Currently, the number of downloads is lower than the current enrollment numbers.

Vinson said that was higher than most download rates on campuses.

“That low number isn’t uncommon,” Vinson said. “You’ll be lucky to get 5 or 10% download. That’s what the averages that I’ve seen.”

Vinson said he believes the marketing push in Washington helped boost the number towards the 20% mark.
Engagement with community
As a campus that overlaps with multiple jurisdictions, engagement and collaboration have been talking points throughout NIU’s hiring process. Vinson said that a campus police force needs to collaborate with others to be most effective at serving its students in a more thoughtful manner.

“In order to be successful in campus policing, you have to have a solid relationship with local police,” Vinson said.

Vinson said he met with commanders of local departments during his visit and saw a great willingness for collaboration and a will to do more and engage community members in future prevention strategies.

The biggest thing Vinson hopes to push for is garnering a larger sense of trust between the public and the department and understanding the expectations officers will have.

“I think it’s really about creating an open and honest dialogue and setting those expectations,” Vinson said. “So that officers understand how we serve our community and then what the ramifications and our repercussions are if we don’t treat our students with respect.”
Recruitment within the department
In addition to his roles as an officer, if hired, Vinson would be responsible for recruiting and retaining members of the NIU Police Department during a time that shows law enforcement struggling to find applicants, according to a report from the International Association of Chiefs of Police.

“It requires a very thoughtful approach,” Vinson said. “It’s really trying to identify those candidates who truly want to work in a campus environment.”

During his time at the University of Washington, Vinson said he implemented a more thorough interview process to give applicants a better understanding of the climate and responsibilities of the job.

“You want the potential employee to be there and understand the environment in which he or she is going to be joining,” Vinson said. “So we extended the hiring process.”

Applicants meet with various administrators, dispatchers and do a ride-along before leaving the interview to give a better sense of the job an applicant is in for if hired, Vinson said.

Vinson was the final of three candidates. Community members who attended in person were asked to provide contact information to fill out a survey on the candidate who presented that day, and those who watched via Zoom also received a survey, according to the NIU president’s office.

The university hopes to have a decision in the first part of 2022, said Rena Costones, senior associate vice president for outreach, engagement and regional developments. The NIU Chief of Police will report directly to Matt Streb, Chief of Staff to Lisa Freeman. The hiring decision is not subject to approval by the Board of Trustees.