Huskies go down to Leathernecks 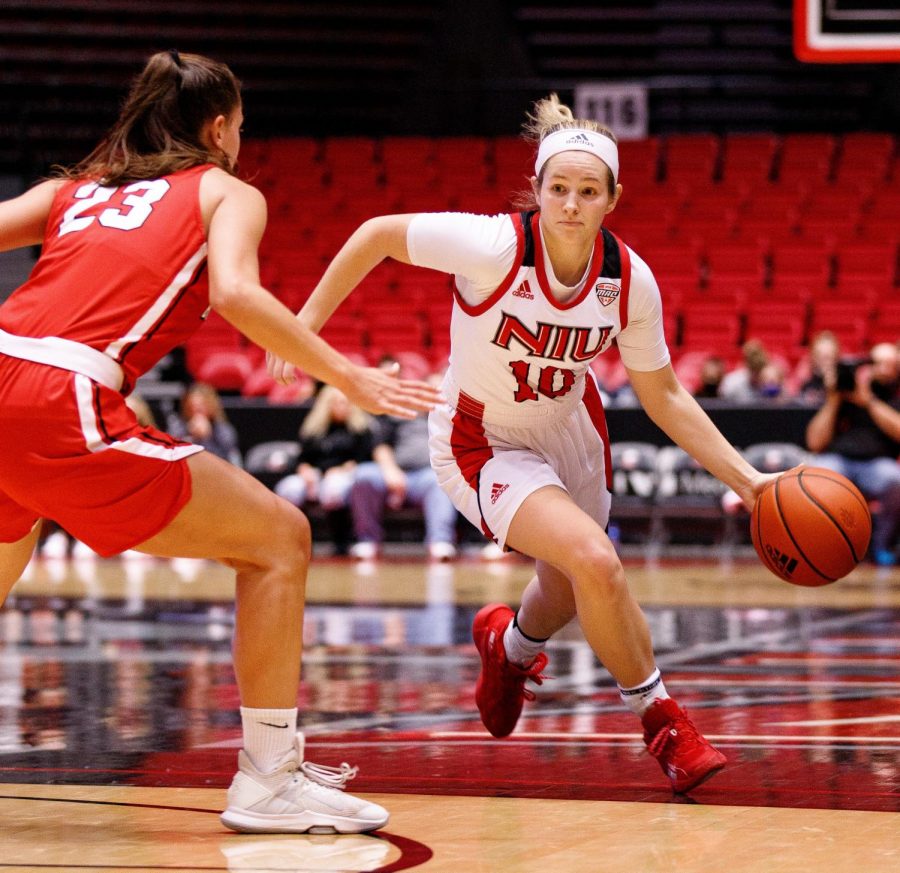 DeKALB — The women’s basketball team saw their two-game winning streak snapped after being defeated by the Western Illinois University Leathernecks 92-83 in overtime in the opening matchup of the Compass Challenge Friday night.

The Huskies played their most competitive game of the season, with a season-high 15 lead changes throughout the game. The Huskies got its usual production from junior forward A’Jah Davis, who put up her fifth straight double-double to start the season. Davis scored 21 points on 9-13 shooting from the field and grabbed a team-high 10 rebounds.

Junior guard Chelby Koker struggled with shooting and fouling. Koker shot 33% from the field and had a game-leading 10 turnovers. Koker fouled out with 2:38 left in the overtime period after receiving five fouls.

The Huskies received a much-needed boost off the bench from redshirt freshman guard Sidney McCrea in light of Koker’s struggles. The second-year Huskie made her collegiate debut Friday after suffering a knee injury that sidelined her for the entire 2020 season. McCrea shot 54% from the field, including five made three-pointers.

“Sidney did a good job of coming into the game and shooting the ball with confidence,” head coach Lisa Carlsen said in an NIU Athletics news release Friday. “This was her first real action coming off of the knee injury last season, and she showed what she can do on the floor, especially from the three-point line.”

NIU got off to a slow start from the field in the first, shooting 31% and allowing the Leathernecks to take a four-point lead into the second quarter. The Huskies bounced back on offense in the second quarter, scoring on 48% of their shots. The defense also showed a performance that held the Leathernecks to 13 points in the quarter on 28% shooting.

NIU started the fourth quarter down 57-56 but quickly took a lead off a three-point field goal by redshirt senior guard Janae Poisson. The teams stood within one score, trading baskets back and forth, until WIU senior guard Danni Nichols made two free throws, giving the Leathernecks a 74-72 lead with 47 seconds remaining.

The Huskies drew up a three-pointer for Poisson. Davis grabbed a rebound in the scramble following a missed three-pointer by Poisson, allowing NIU to tie the game with a Davis layup with 16 seconds remaining. The Leathernecks missed their final shot to force overtime.

The Leathernecks came out hot to start the overtime by scoring three straight on an 8-0 run. WIU would extend their lead to as high as 11 before eventually winning the match 92-83.

“Western made some big shots at the start of overtime that put us back on our heels,” Carlsen said. “Our biggest issue was our defensive intensity tonight, and that bore out in overtime.”

NIU will have a quick turnaround as they prepare to face off against Eastern Illinois University Saturday in Macomb at 4 p.m. for the second game of the Compass Challenge.