Huskies go from worst to first 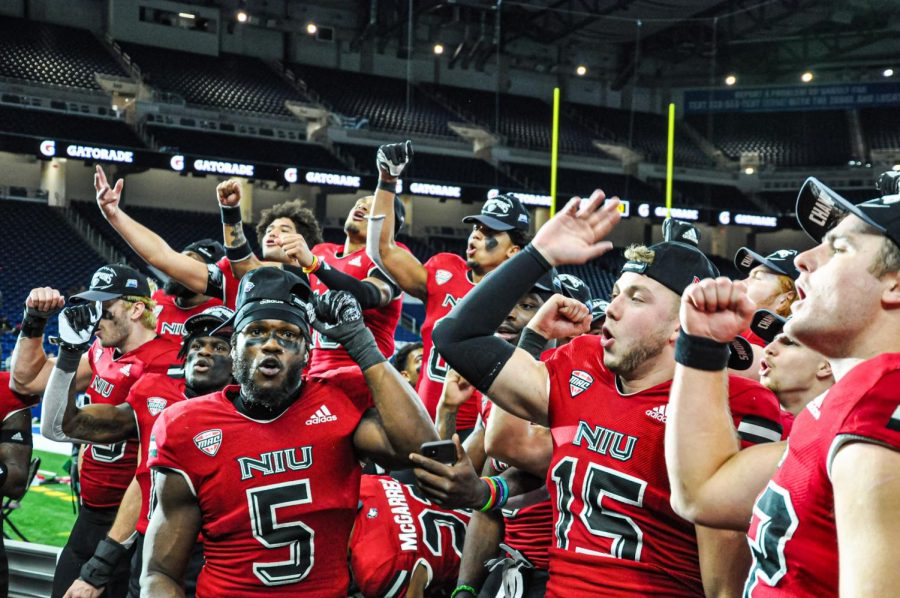 NIU players celebrate in front of their fans after their 41-23 victory over Kent State on Dec. 4 in Detroit. The Huskies become the first team in FBS history to win a conference championship game after going winless the year prior. (Wes Sanderson | Northern Star)

DETROIT — When NIU was voted to finish last in the conference, head coach Thomas Hammock had a message for his team.

Hammock brings his alma mater their sixth MAC Championship in program history. Hammock gave thanks after the game to the university and players for buying into his vision for the program.

“It doesn’t get lost that the university gave me an opportunity to come home,” Hammock said. “I couldn’t thank them enough. We had a plan and a vision. I told our players to buy the dip, and they did that. We built this thing with the right type of men in our program, and they did phenomenal today.”

COVID-freshman running back Jay Ducker ran for 146 yards, earning him Offensive Player of the Game. Ducker, who missed all of last season with an injury, surpassed 1,000 rushing yards on the season with his performance.

“I just think of the adversity,” Ducker said. “I knew my role coming in, and I was just waiting for my opportunity.”

Junior quarterback Rocky Lombardi rushed for three touchdowns, two coming on naked bootleg runs in the second half where the Michigan State University transfer was uncovered by the defense. The Huskies ran the ball a MAC Championship game record 60 times, and Kent State’s inability to stop the run enabled his added touchdowns.

“We were just running the ball so well,” Lombardi said. “They have to put guys in there to stop (the naked bootleg), and they didn’t honor me on the edge. It was as simple as that.”
Containing Crum
After intercepting only one pass all season, the Huskies defense picked off Kent State graduate student quarterback Dustin Crum twice. COVID-freshman safety C.J. Brown intercepted a pass in the third quarter and returned it 26 yards for a touchdown.

“We really wanted to get our linebackers downhill more,” Hammock said. “We had them confused and off schedule. That gave us the ability to run the football.”

The Huskies scored on their opening possession with a 37-yard field goal by redshirt sophomore kicker John Richardson.

After forcing a Kent State punt, the Huskies went on a lengthy drive highlighted by a 23-yard run by Ducker. Redshirt senior running back Clint Ratkovich scored on a two-yard touchdown to make it 10-0.

After a nearly eight-minute drive, Lombardi dove over the goal line for a touchdown with 8:33 left in the first half to make it 17-0.

The Huskies’ defense held strong again, forcing a Golden Flashes turnover on downs. NIU had another scoring chance in the final minute of the half snuffed out with an interception by Kent State graduate student safety Nico Bolden.
Pouring it on late
After Kent State scored an opening drive field goal, NIU burned seven minutes of clock on a possession that failed to net any points.

Crum was hit as he threw a pass to open the next possession, leaving a fluttering ball for Brown to intercept and take 26 yards to the endzone for the interception return touchdown.

Crum and the Golden Flashes responded late in the third with a 17-yard touchdown pass to graduate student Nykiem Johnson to make it 24-10 entering the fourth quarter.

After struggling in the third quarter, COVID-freshman wide receiver Trayvon Rudolph gave NIU a spark with a 33-yard catch to put the Huskies past midfield. Lombardi finished the drive with a five-yard touchdown run on a faked handoff that left him uncovered by the defense.

Lombardi scored on another bootleg run on the next drive after being given a short field by a Kent State turnover on downs.

The Golden Flashes didn’t go down without a fight, scoring two more touchdowns in the final five minutes to make the final score 41-23.

NIU’s record improves to 9-4 on the season. The Huskies now wait to learn when and where they play their final game of the season, a bowl game. The College Bowl selections will be announced Sunday.