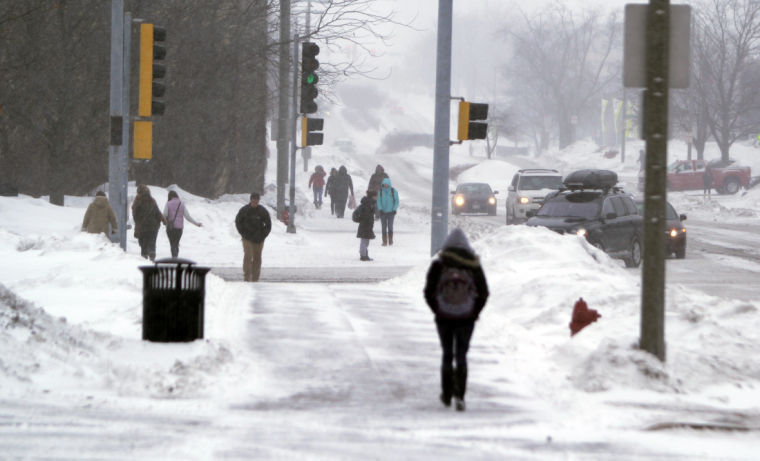 Students walk to class along Normal Road during a snow storm.

The past few weeks have been abnormally nice weatherwise. But, in the words of House Stark, winter is coming. The snow, the ice, the wind that feels like death when it blows across your face, there’s a Midwestern winter coming and it’s not going to be pretty. But there is a method of survival. While it won’t require you to reside in a horse carcass like Leonardo DiCaprio in “The Revenant,” these tips will definitely improve the winter experience.

Most of us are familiar with traditional winter wear like gloves, beanies and scarves. Not enough people understand the value of thermal clothing, which is designed to trap body heat. Thermal shirts, socks and long underwear can make time outside much more comfortable, especially the long underwear.

While it may not seem traditionally masculine to wear thermal leggings, my forefathers would wear them while working on the farm in the winter. There’s nothing manly about being frozen from the waist down.

Thermal gear is also incredibly affordable. Combined with traditional winter clothing and a good pair of boots, you should be set for the winter.

Have a Roadside Kit

For students with a car on campus, there is a set protocol for getting out of a hazardous situation involving your car. Having an ice scraper/snow brush will be handy, but you should also prepare an emergency kit in case an emergency occurs like slipping on black ice or being stuck in a ditch.

A standard, affordable kit should include the following:

Kitty litter: Even if you don’t have a cat, spreading this on your tires will provide the traction necessary to get out of a ditch.
Road flares: These surprisingly affordable devices are very handy for alerting passing traffic of your predicament. While you could have a flashlight, batteries can die and the light is much less apparent when you’re moving at 45 miles per hour.
Snacks: If you’re stuck on a backcountry road, having some long-term snacks like granola bars, beef jerky and fruit snacks might be good for sustenance. As for drinks, you could bring bottles of water but they’ll likely freeze.
Blankets: One of the worst things you can do when you are stuck for long periods of time is to leave the car running for a long time. For every hour you are stranded, run your car for only 10 minutes to save fuel, according to the Massachusetts Department of Transportation. To stay warm, use blankets to keep the heat in and periodically turn on the car. Keeping a spare beanie, scarf and pair of gloves could also come in handy.

Even if you wear warm clothing, try to cut through as many buildings as possible to get to class. By doing this, you reduce your time outside, which is always advantageous. Even if it adds a couple more minutes to your walking time, it’s just worth it.