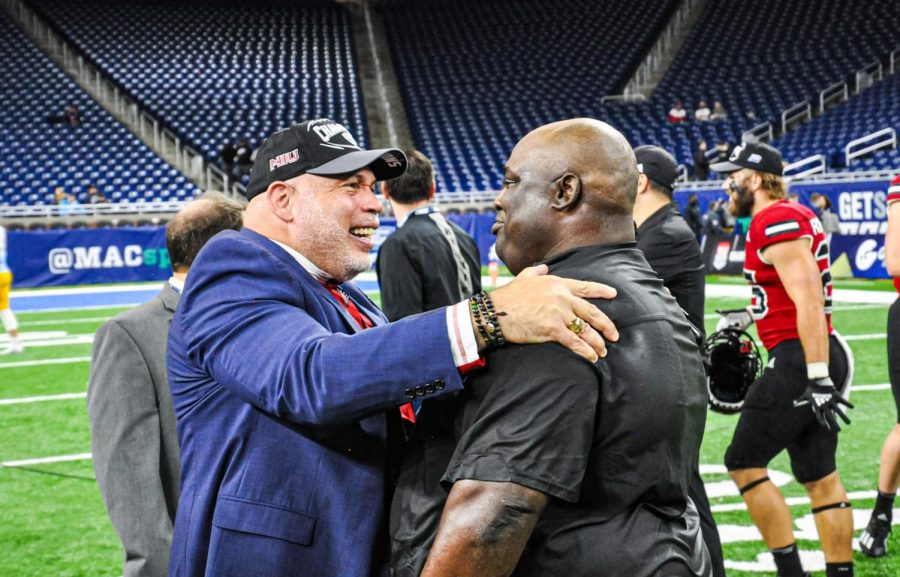 Everyone wanted to congratulate head coach Thomas Hammock after his Huskies won the Mid-American Conference championship Saturday in Detroit.

One interaction stood out to him: a “moment of reflection” with his grandmother on the field.

“My grandfather passed away a few years back and meant a lot to me in my development,” Hammock said. “He believed in me before anyone else did.”

Hammock previously told The Athletic about his last interaction with his grandfather, Charles, after the 2017 NFL season. The message to him then was the same as it was when he was eight years old.

“He was just smiling,” Hammock said. “We spent about four or five hours together, and he was just smiling. Right before I left, the last time I ever saw him, I said, ‘Granddad, why are you smiling?’ He said, ‘Because you’re going to be great.’ He kept that belief in me since I was a child, and it means a lot.”

That was for you Granddad. You believed in me from the very beginning. I felt your presence today. pic.twitter.com/zIkprirQpN

After a winless 2020 campaign and being voted to finish last in the MAC West in the Media Preseason Poll, Hammock and the Huskies never made their season about proving those who doubted them wrong. What carried them to Detroit was their belief in themselves and their ability to barely outscore their opponents.

Junior quarterback Rocky Lombardi, who was viewed by some as damaged goods coming in from Michigan State University, scored 21 total touchdowns and ran for three in the conference championship game.

The same belief Hammock’s grandfather instilled was given to Hammock’s players and system. If there’s anything that best reflects NIU’s season, it’s the belief Hammock has in the process of becoming great.

When the celebration was over at Ford Field and the only people left in seats were sitting beside me in the press box, I reflected on my four seasons covering NIU football.

I briefly remembered my first trip to Detroit in 2018, where DJ Brown caught a go-ahead touchdown seven stories below me to complete a comeback against the University at Buffalo.

I tried to recall running around Bobby Dodd Stadium thinking my heart was going to leap out of my chest during NIU’s upset against Georgia Tech.

All I could think about was my own grandpa, who passed away in January. When I got my first byline in December 2014 as a high school freshman, my parents brought a copy of the paper to my grandparents’ house in West Virginia.

I’m pretty sure my grandfather wanted it framed in their house. I had tried my hand at all sorts of sports throughout my life, and nothing I had done got as prideful a reaction from him or my family as going into journalism did.

His faith in my ability to grow, along with those who nurtured my talents throughout my time in school, motivated me to continue to get better and dedicate myself to writing.

That’s what Hammock’s story left me reflecting on from practically a mile above the turf at Ford Field. I reflected on my family, our adviser Shelley Hendricks and all the people at the Star and NIU Athletics who had the faith in me to be great. Those people put my butt in a seat at Ford Field to cover big-time college football, and I was so happy I was able to make those people proud.

I graduate on Sunday and then have one more game to cover for the Star, the Cure Bowl in Orlando on Dec. 17. Then, I’ll give up the seat at the football beat for whoever is next. I hope whoever is next has the belief system behind them that guided me through four seasons in DeKalb.