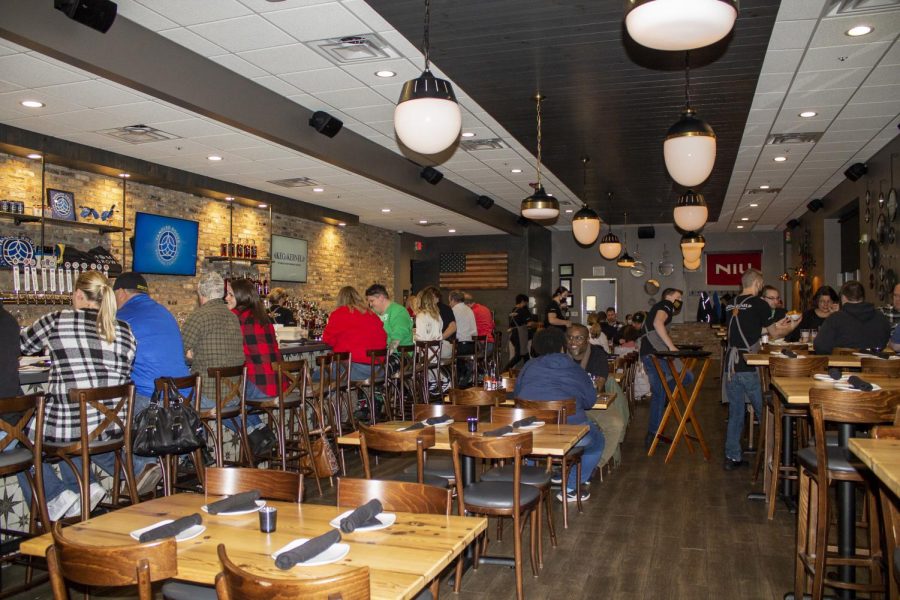 A photograph of the inside of Keg & Kernel during the restaurant's grand opening.

DeKALB — Keg & Kernel, a new restaurant by Tangled Roots Brewing Company, opened its doors to the DeKalb community Saturday. The restaurant is perfect for those who love beer and quality food with a DeKalb-inspired twist.

The parent company, Tangled Roots Brewery Company, is based in Ottawa and has four other restaurant locations throughout Illinois, with the possibility of expanding to five in the future.

Keg & Kernel, located at 106 E. Lincoln Highway, is the third location that Tangled Roots Brewing Company has opened this year, said Amy Anderson, the general manager at Keg & Kernel. The restaurant took over the corner space previously occupied by Tavern on Lincoln.

Tangled Roots Brewing Company names all of their locations after something significant or historical to the area that the restaurant is located in, Anderson said.

For DeKalb, the menu at Keg & Kernel aims to have a variety of dishes that feature corn, one of them being the Pimento Pub Dip, Anderson said.

The price range at Keg & Kernel is anywhere from $15 to $35, depending on what is ordered, Anderson said.
Community reaction
On its first day open to the public, initial reviews were positive after its 4 p.m. opening night.

“I am a huge beerhead myself,” said Al Ferris, a resident of DeKalb. “I was just happy to see this space get filled up again, I think it’s a wonderful location.”

The space, now occupied by Keg & Kernel, has been vacant since Tavern on Lincoln closed during the COVID-19 pandemic.

Scott and Shelly Johnson, both residents of DeKalb, ended up stumbling across Keg & Kernel’s grand opening while out for a walk.

“The food was really good,” Shelly Johnson said. “We had the parsnip veloute soup and the battered fish and chips.”