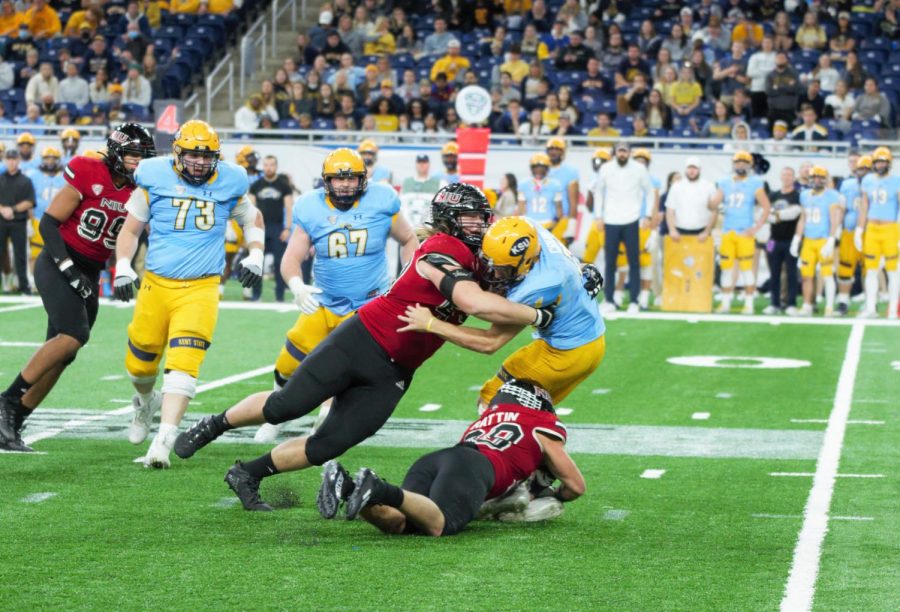 DeKALB — The Huskies can finish their turnaround season with double-digit wins if they can knock off the Coastal Carolina University Chanticleers on Friday in Orlando for the Tailgreeter Cure Bowl.

The past week has been “a blur” for head coach Thomas Hammock after securing the Mid-American Conference Championship on Dec. 4 by beating the Kent State Golden Flashes 41-23.

Hammock has spent the majority of the last week out of town making visits to potential recruits, putting the staff in charge of creating a game plan to face a Chanticleer squad boasting a 10-2 overall record.

“It’s been a blur for me personally,” Hammock said about the past week. “This bowl game is important. We kept our staff off the road and they’ve been game planning for Coastal. I went all over to see the guys we needed to see…I did the brunt of that work and my staff got a game plan for Coastal. They’ve got a great plan, they’ve kept me updated and obviously, I’m going to dig into the film this weekend to catch up.”

The meeting at Exploria Stadium in Orlando will be the first ever meeting for the two programs with Coastal Carolina joining the Football Bowl Subdivision in 2017. In the past two seasons, only five programs have better winning percentages than the Chanticleers.

Coastal Carolina enters the game with the sixth-best scoring offense in the country, averaging 40.4 points per game behind a spread option scheme. Hammock said the Chanticleers’ spread option offense is focused on putting defenses in one-on-one situations.

“Offensively, (Coastal) has difference makers at most of the skill positions,” Hammock said. “They’ve got some option principles in their offense. They play a perimeter game of offense where they’re going to get you in space with one-on-one opportunities. We have to make those one-on-one plays. We have to have great eye discipline with all the things they can do on offense.”

The spread option is something sophomore linebacker Nick Rattin said he hasn’t played against yet at the college level. Rattin shared his excitement with redshirt senior linebacker Lance Deveaux Jr., saying he’s excited for a new challenge.

“I haven’t played any option-style football since I got here, so I’m pretty excited about it,” Rattin said. “I was watching film today and went into the locker room and told Lance that this is going to be a very cool experience for us because we don’t get to see that style of offense normally.”

The rushing attack of the Chanticleers, ranking sixth in the country in yards per game, is led by senior running back Shermari Jones with 988 rushing yards and 13 touchdowns.

Beyond practice and game prep, the Huskies and Chanticleers will participate in bowl week festivities throughout the week, including a visit to Universal Studios on Wednesday and a pep rally on Thursday.

“The opportunity to go to Florida is a bonus,” COVID-freshman wide receiver Trayvon Rudolph said. “We don’t have to worry about the weather being too cold. It’s going to be hot, so the weather is a plus.”

The Cure Bowl provides more than just an opportunity at a trophy to the two squads. Each year, the Orlando Sports Foundation raises funds for the Breast Cancer Research Foundation. Seven NIU players, as well as offensive coordinator Eric Eidsness, have loved ones who have battled breast cancer.

Kickoff for the Cure Bowl is scheduled for 6 p.m. ET at Exploria Stadium in Orlando. The game will air nationally on ESPN2.