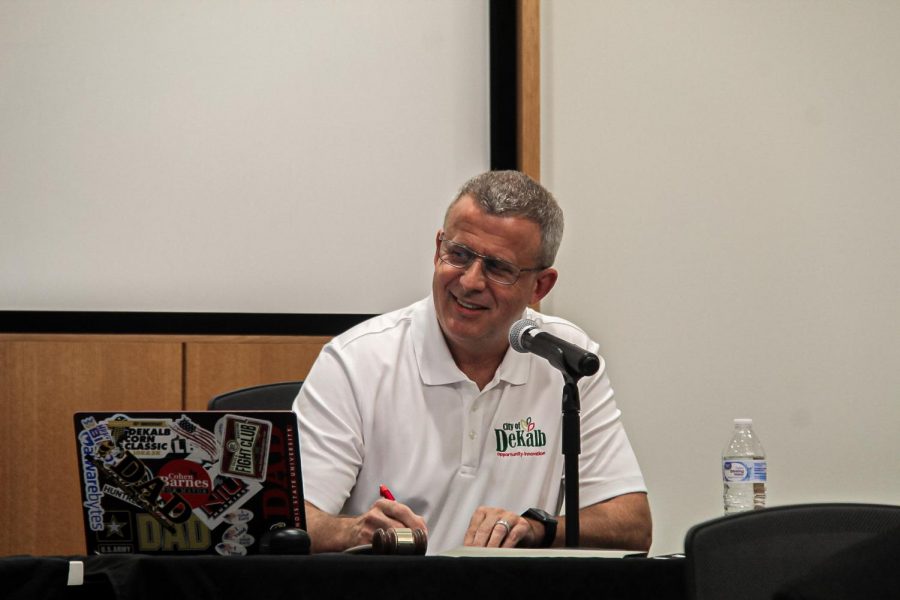 DeKALB— The DeKalb City Council passed an ordinance 6-0 on Monday to approve the aggregate levy for 2021 of $9,521,416, which includes the City’s and the DeKalb Public Library’s levies.

This ordinance was considered at the City Council’s Nov. 8 meeting and was tabled at their Nov. 22 meeting due to the concerns regarding the library’s significant levy increase.

“I know we started conversations with our tax advisers about what we can do to lower the overall community tax rate,” City Manager Bill Nicklas said. “It not only plays into how we attract new business to us here but how we keep businesses and families in our community because property tax does affect livability.”

After Mayor Cohen Barnes met with the library board, their original proposed levy of $2,700,708 decreased to their current levy of $2,675,317, according to the Dec. 13 City Council agenda.

Despite the library board agreeing to decrease the library’s levy, City Council members still voiced some concerns.

Fourth Ward Alderperson Greg Perkins said he hates surprises and doesn’t understand why the council did not see this coming. “I think process-wise, looking forward I’d like to see something, some process, what’s gonna change in the process so that we’ll know this is going to happen,” Perkins said.

Sixth Ward Alderperson Mike Verbic said he cannot speak on what it takes to operate a library but he can speak on the fact that the library levy is excessive.

Barnes said the city has done an amazing job at lowering tax rates.

“If we can decrease our tax rate that means we make it more affordable for people to live here,” Barnes said. “But then the beautiful part of it is that makes it more appealing for people to want to invest in our community. That makes it more appealing for businesses to want to build new buildings, more data centers that come here, which means more EAV and more revenue.”
City approves FY22 budget
The City Council passed on first reading the proposed 2022 fiscal year budget.

“I’m pleased to say as the mayor said earlier in the public hearing that all of our funds, there are 32 of them are balanced appropriately (and) the city’s general fund is in good shape,” Nicklas said.
Consideration to recharge bus fares
The City of DeKalb is considering reinstating the city’s public transit fares after they were suspended in March 2020 due to the COVID-19 pandemic.

“One-way trips for general passengers cost 50 cents,” Nicklas said. “For senior citizens, individuals with disabilities, K through 12 students pay 25 cents, NIU students, children under age five have always been able to ride free and would be if we were to reinstitute fares.”

Nicklas said the expected fare revenue for a full year if all goes well is $100,000.

Transit Manager Marcus Cox explained why DeKalb’s fare is only 50 cents, which is lower than other cities.

“When we did the consolidation of transit services back in 2019, the Huskie line route that NIU was operating was $1 fare,” Cox said. “And through that process through the transit development plan, it was recommended that due to the consolidation that there’d be a reduction of fare because that actually entices more people to come out and utilize the bus that may not otherwise. And so we actually did see higher ridership.”

Nicklas said they will return to the topic regarding transit in February.